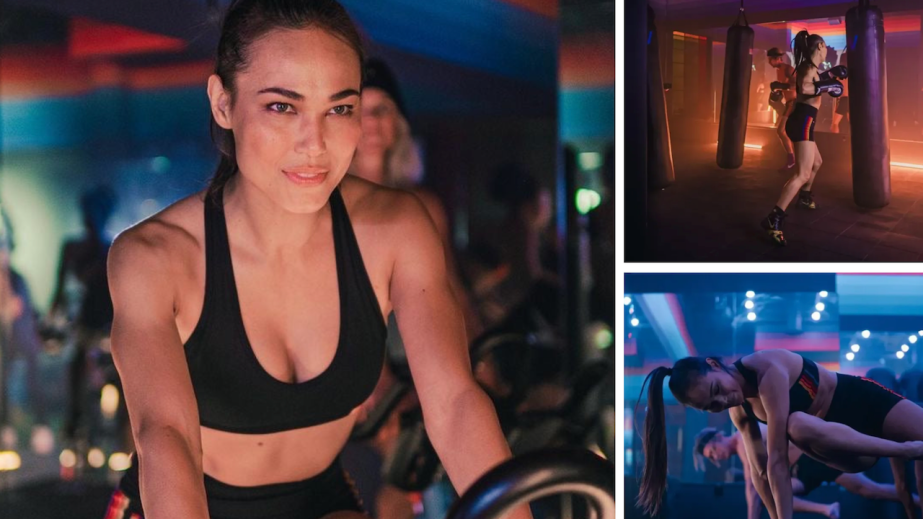 As the fashion-meets-fitness wave gains steam, brands are going beyond dressing customers for the fitness studio by becoming gyms themselves.

Activewear brands Lululemon, Sweaty Betty and Athleta have long offered on-site workouts as part of the retail experience, but they have yet to go so far as to open a standalone fitness space. Meanwhile, Aviator Nation, Revolve, Hermès and Alo Yoga are doubling down on the fitness concept by offering workout classes, dedicated pop-ups and even full-fledged standalone studios.

Following a socially isolating, challenging pandemic, selling sweat sessions hand in hand with sweatpants makes good sense, according to those going there.

In April 2022, Mycoskie opened RIDE, a standalone yoga and spin studio in Santa Monica, California. RIDE charges $30 for a single ride. There’s also a three-class intro offer for $60 and packages for frequent customers. RIDE sells Aviator Nation’s activewear and RIDE-branded merch. Apparel sales across both brands at the studio range from $3,000-$10,000 per day, said Mycoskie, who expects retail revenue “will continue to grow as classes fill up and new classes are added.” RIDE’s instructors all wear Aviator Nation activewear, while employees at Aviator Nation boutiques can take RIDE classes for free.

“I didn’t launch [RIDE] to expand the brand or do something trendy,” she said. “It was conceived to promote wellness and mental health.”

Aviator Nation sales driven through past IRL activations were also a motivator. “Anytime we do a special event-specific or location-specific collection, it flies off the shelves,” Mycoskie said. That’s included collections tied to Vail, Venice and Miami, as well as limited-collection styles sold at events including SXSW and even the Malibu Chili Cook-Off.

Overall, Mycoskie sees RIDE as a hybrid “showroom, retail space and fitness studio” for both Aviator Nation and RIDE brands.

So far, RIDE’s demo is a mix of existing and new Aviator Nation customers. “The studio itself is on a busy street in Santa Monica, so even on a slow day, we’ll have 200-400 completely random people walking into our space and seeing our new gear,” Mycoskie said. “The customer acquisition will no doubt be positive.”

Meanwhile, Alo Yoga has incorporated fitness classes into its retail experience since its first brick-and-mortar store opened in Beverly Hills in 2016 with a “yoga sanctuary” studio and cafe, said Angelic Vendette, Alo’s vp and global head of marketing.

“Our flagship sanctuary stores integrate retail and yoga studios because spreading mindful movement, inspiring wellness and creating community are at the core of everything we do,” she said. At five of Alo’s 17 store locations, 2-3 classes — like Yoga Flow, Yoga Sculpt and Meditation — are offered daily, while the other 12 stores hold monthly wellness programming. Pricing is in line with boutique fitness studios in major bicoastal cities: $32 per class, with an intro package of three classes for $3. In 2018, the brand also launched its fitness app, Alo Moves, which currently offers over 100 new classes per month.

In April, the first Alo Wellness Club opened in Los Angeles. The wellness and fitness facility includes a yoga studio, a state-of-the-art Alo gym with personal trainers, facials, massages and a green juice bar. A second Alo Wellness Club opened in NYC’s Soho neighborhood in the fall. “Fashion and fitness have long been intertwined, and it only makes sense; when you feel good, you look good,” Vendetta said.

Membership is ”by invitation-only, for [Alo] community and partners, for now,” Vendette said. And for those on the list, everything’s free.

There’s also Hamptons-born Bandier, which has focused on selling sleek activewear and offering trendy workouts since opening its first store in Flatiron, NYC in 2016.

The industries’ cross-pollination isn’t new, though it’s typically happened in reverse. Fitness studios, from Barry’s Bootcamp and Peloton to more niche names like New York Pilates and Rumble, have bet big on apparel collections, with many emblazoning their recognizable logos onto leggings, bras and hoodies by Lululemon, Ultracor, Varley and Alala.

SoulCycle took its retail ambitions a step further: It set out to become a full-fledged DTC consumer fashion brand with the 2017 hire of Caroline Gogolak, co-founder of swanky athleisure retailer Carbon38, to be its vp of retail. For around three years, Gogolak led its e-commerce launch and expansion. She also guided its transition from screen-printing its logos onto workout wear by other brands to designing and producing its own apparel via an in-house product team, including Barneys New York and Victoria’s Secret design alums. In-house apparel brand Soul by SoulCycle also launched at Nordstrom.

When Revolve re-launched its Revolve Social Club in March 2022, it opted for a consumer-facing six-week pop-up, a change from its members-only Social Club that operated from 2016-2019. Instagrammable photo opps and, of course, plentiful shopping abounded in both Social Club iterations. But this time around, the initiative included a wellness center gym with workout classes offered four days a week by boutique fitness studios like Cityrow, and local fitness experts and trainers.

“The physical lifestyle aspect is just as important as the product, so where our customers go, we go,” Revolve co-founder and co-CEO Michael Mente said in a press release about the Social Club’s relaunch.

As for the investment Aviator Nation is making with RIDE, “I’ve always believed in quality above financial return,” Mycoskie said. She plans to open more fitness studios, as well as remote fitness classes and pop-up events — with retail undoubtedly along for RIDE’s ride.

“A standalone fitness studio is not going to make a lot of money off of fitness classes alone,” she said. “The money is in the merchandise, which is why this concept works for us, from a financial perspective.”

And though Aviator Nation’s activewear has historically been “a small part of our overall collection,” Mycoskie said the brand is “ramping up” its activewear selection as RIDE evolves.

“It’s important people can see that we are taking this type of apparel seriously,” Mycoskie said. “By having a fitness studio, we’re not only showing that we’re the real deal, with a vested interest in activewear and the lifestyle that surrounds it, but we’re also bringing in people that work out daily to show them our new products.”