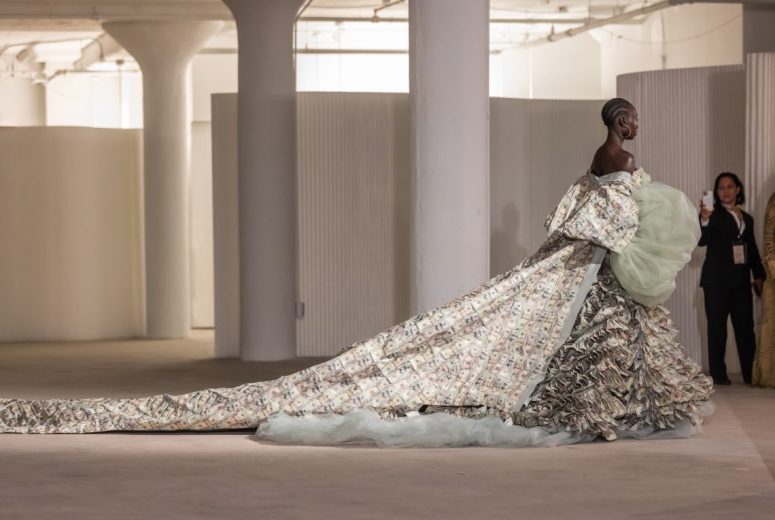 Fashion for a cause

Where Friday was bright and sunny, Sunday at New York Fashion Week was dreary and wet. The designers seemed to take their shows more seriously, as well, dedicating them to urgent political causes or to departed friends and influences.

Tara Subkoff, designer of the brand Imitation of Christ, which relaunched in 2020, always aims to combine fashion with activism. Her presence at NYFW this season was no different. Her collection was full of utilitarian garments, some of them resembling orange prison jumpsuits, and gas masks to reflect a tumultuous moment in American and global politics.

Of particular relevance to her were two topics: the draconian anti-abortion laws passed around the country after the overturning of Roe v. Wade and the continued construction of oil pipelines, despite the urgent need for renewable energy.

“I have had a recurring, very visual nightmare since June 2022 when Roe v. Wade was revoked,” Subkoff said. “I had to make art about it and create this image, as I am terrified that this is what the future holds for women in this country unless we are able to speak out.”

On the topic of renewable energy, Imitation of Christ also joined — and invited its entire NYFW press list to — a protest in Manhattan with activist group New York Communities for Change against the construction of new oil pipelines. New York State Senator Julia Salazar was in attendance, as was Senator-Elect Kristin Gonzalez (who represents my district; shout out to Astoria!).

Other social causes were promoted through fashion, as well. On Saturday, designer Fe Noel debuted a dress/art piece called “The Dre$$,” a 16-foot gown sewn with $1.6 million worth of fake bills. It was made to symbolize the average amount of money that women miss out on in retirement savings, due to income inequality and the gender wage gap. Noel pointed out that 85% of fashion school graduates are women, yet only 14% of fashion brands are led by women.

“This dress is about laying a strong foundation and building on top of that,” Noel said. “It represents women’s strength while also highlighting a very real problem in society: the 30% retirement income gap between women and men.”

The presence of explicitly political and activist slants at fashion week is a change that’s come from the tumult of the last two years. The pandemic, rising environmental disasters, war, political upheaval and racial injustice have all led to a feeling that fashion needs to step up and more directly interact with the issues of the day.

As designer Adam Lippes told me on Friday, “There’s been a positive movement in the industry around how fashion can use its voice in response to political change.”

It’s not just fashion brands that love NYFW. Hotels and hospitality providers are happy to welcome the legions of affluent celebrities, designers and influencers who come to the city for the week. Marc Speichert, chief commercial officer at Four Seasons, told me, “We see a marked increase in guests staying at our Four Seasons New York Downtown property during New York Fashion Week. We are often fully sold out during this time.” And that’s true of this week, he said.

In response to that, Four Seasons partnered with Christian Siriano to create custom NYFW-themed postcards that were made available in the lobby of the company’s Manhattan location. Guests can take a postcard, write a letter to a friend or loved one, get it hand-addressed by an on-site calligrapher, and send it off through the hotel concierge to make some non-NYFW-attending recipient jealous.

For Speichert, NYFW is a perfect opportunity to target the fashion community.

“Today’s luxury consumers are looking for immersive experiences throughout all aspects of their lifestyle, and [we] continue to extend our brand across many growing lines of business,” Speichert said. “We’ve got one of the largest branded luxury residential portfolios globally, a wide range of retail offerings, unique food and beverage experiences, and a private jet comprised of curated itineraries.”

Other hotels throughout the city got in on the NYFW action, as well. The Crosby Street Hotel hosted a preview of a new skin-care brand founded by Dr. Ariana Balaguer, daughter of three-term president of the Dominican Republic Joaquin Balaguer. Meanwhile, the Walker Hotel was the home of several days’ worth of fashion talks, parties and shows.

I’m personally not well-versed in the wild and very popular world of Korean pop music, but for you K-pop fans in New York this week, the pop star Lee Je-no, better known as simply Jeno, will be walking in the Peter Do show on Tuesday. In addition, Japanese pop star Shohei, Korean actor Park Eun-seok and K-pop singer Kant Seul-gi will be in attendance.