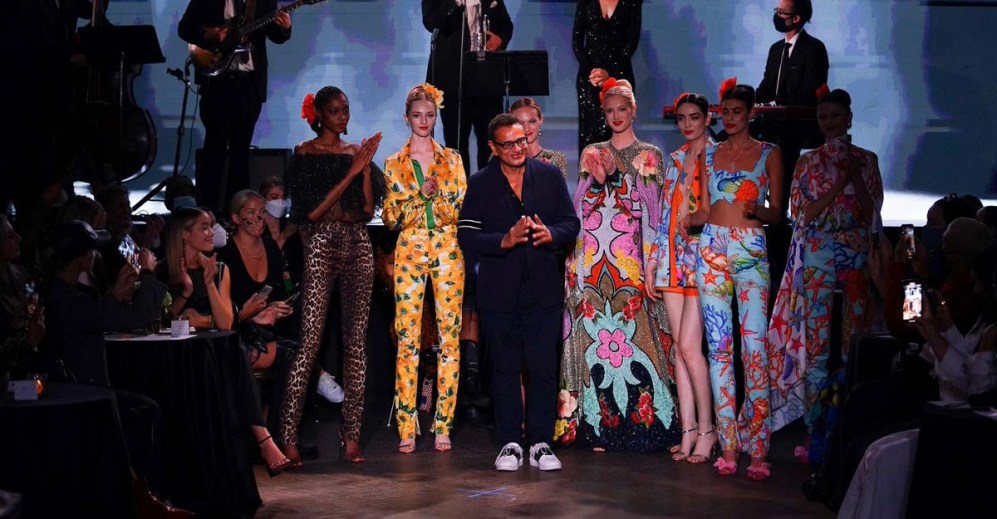 NYFW Briefing: This time, NYFW is back for real

It’s that time of year again.

New York Fashion Week began on Friday. The day was clear and bright, and the only downside was that the sole of my shoe fell off on the way to my first show, Naeem Khan.

Khan’s show was characteristically elegant and bombastic. Before the audiences filed in, Khan told me that, even though it’s fall, he wanted the show to reflect the rebirth of spring.

“The collection is called Jardin du Nuit, or garden of the night,” Khan said backstage. “It’s inspired by flowers, gardens, life and happiness. To do something like this is to send the message that we are blooming again.”

Fashion and New York are “back in full swing,” Khan said. And comparing this season’s schedule to last February’s or even September’s proves his case.

The last few seasons of NYFW were diminished by notable brands being absent and the ongoing effects of Covid-19. Last September, I wrote the headline “NYFW is (kinda) back,” but now it seems it is back for real.

Brands like Tommy Hilfiger, Puma and Area, which didn’t show in recent seasons, have returned. And big names that have increasingly shunned New York in favor of showing in Europe, like Fendi, have returned to the runways of Manhattan.

But just because it’s back doesn’t mean runway fashion is the same. Khan said he’s toned down the glamour of his collection this season, emphasizing the subtle, comfortable and casual, while still aiming for elegance.

The same feeling permeated at explicitly formal shows. Leonardo 5th, which held a show Friday afternoon dedicated to tailoring and suits, debuted a number of alternative takes on tailoring, including shorts, bold patterns, beachy colors and fabrics, and futuristic silhouettes.

“Formality is always our inspiration, but we combined it with street art and the streetwear aesthetic, a merge of the two.” said Ana Sofia Cordero, fashion director at Leonardo 5th.

The merging of aesthetics was an explicit reaction to the pandemic-era trend of comfort and casualization. But Leonardo Cordero Suria, chief designer of Leonardo 5th, said he thinks formalwear still has an important place in fashion.

“Tailoring is always going to be there,” he said. “It’s going to adapt to the needs of the day and we have to meet those needs, but it’s not going anywhere.”

Despite the changes, it’s good to be back at an NYFW that feels alive. The calendar is packed with shows throughout the week that Glossy will be covering, like Altuzarra on Saturday, and Khaite and Badgley Mischka on Sunday.

The good vibes were omnipresent. Various stagehands, PR reps, designers and fellow attendees of the shows voiced to me throughout the day how happy they were to be out and about again. Naeem Khan even helpfully offered to glue the sole back onto my shoe.

What’s your favorite part of NYFW?

“I look forward to the exam period feeling of it. In fashion, it’s like we have exams twice a year. There’s stress and then there’s relief. I’ve already gone to four or five events, with more to come tonight.”

What are your inspirations for your show on Tuesday?

“We try not to lean too heavily on direct inspirations, but I recently traveled to the Siwa Oasis in Egypt, which was stunning. The entire color palette for the collection was inspired from there, and we worked with two wonderful Egyptian artisans on the pieces”

Have you observed any positive shifts in fashion recently?

A” lot of the trends in fashion today aren’t about the clothing. There’s been a positive movement in the industry around how fashion can use its voice in response to political change. That’s a big difference from even five years ago.”

Have you changed your approach to designing your collections and conceiving your shows since the pandemic?

“I’m much more positive that less can be more. I’m trying to design more in my head and be more thoughtful about what we produce, rather than, say, ordering samples of one piece in 12 different colors to see what works best. There’s a lot waste in the sampling process and retailers always want more and more and more. Since the pandemic, we’ve been trying to be much tighter and smarter about what we produce.”

Have supply chain issues had any impact on that philosophy?

“Luckily, we haven’t had too many problems there, but shipping has been a nightmare. We can still use the materials we want, it just takes a lot longer to get them. The zipper supplier we use ran out of zippers. The buttons we usually order, which should take six weeks, ended up taking 15 weeks. We used to look at the world as this big place where everything was easily available — where you could get fabric in one country, sew it in Italy, embroidered in India and so on. But that’s changed. Now, we’re doing a lot more work right here in New York, just because it’s simpler.”

“All the women backstage are so tall. I was the shortest person back there.” –an average size man marveling at the height of the typical runway model

“God save the queen!” –a very patriotic man wearing a tuxedo with tails, and a Union Jack bowtie and matching cummerbund

On Saturday, the brand Imitation of Christ will not be hosting a show, but instead a protest. The event, called ominously “Oil Is Death,” will protest the construction of further oil pipelines by the U.S. and the damage caused by oil drilling to the environment. It’s organized with New York Communities for Change and will feature appearances from Democratic Socialists of America-endorsed politicians New York Senator Julia Salazar and New York Senator-Elect Kristin Gonzalez.