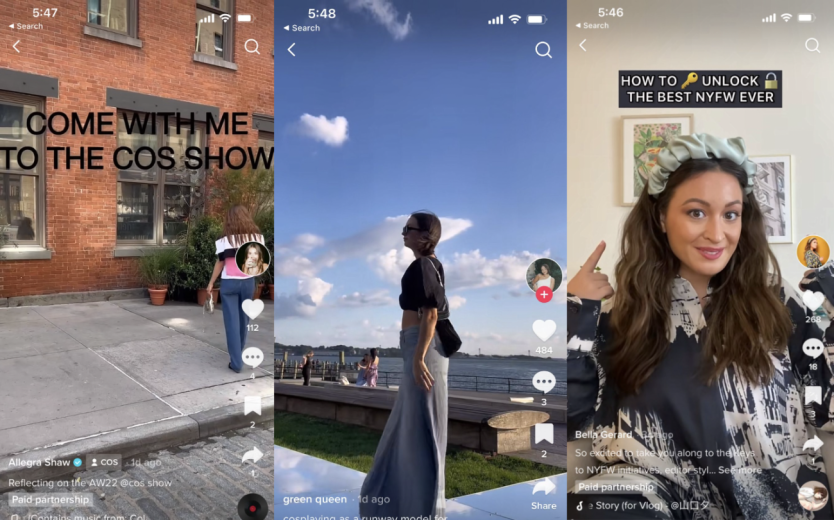 The first time I went to New York Fashion Week, I was an intern and about 15 years old. Instagram did not exist. Blogs were in their infancy. Back then, New York Fashion Week took place primarily at a few key locations. The crowds were smaller, the Uber-laden traffic was nonexistent, and the whole affair felt more clandestine and certainly more exclusive.

Needless to say, in the intervening 16 years, NYFW has taken many different shapes. The fashion crowd has gone from being frustrated by bloggers getting front-row seats to confused by a younger generation of TikTokers, whose outfits are perhaps even more outlandish than the generation before them.

As a reporter, I’ve come to understand that, for the most part, unless I can interview the designers or key stakeholders of a brand, oftentimes a party requiring hours of time spent on various forms of transportation or waiting in line, all to be packed in a crowded room, is not worth it.

Of course, I also understand that my job is very different from an influencer’s. No one is following me to get my takes on a runway show or to see what I wear to sit and watch one. Still, with fashion week becoming a scene with a capital “S,” I wanted to know what was motivating today’s content creators to subsist on little sleep and, often, little sustenance to get through the week.

So I called a few to ask: Are you spending money or making money? Are the brand deals this week better than other weeks? Do your followers care about your NYFW content? And, btw: Are you even having any fun?

While their answers may or may not surprise you, they certainly shed light on the version of NYFW that exists in 2022.

Bella Gerard, a freelance writer and influencer with over 12,000 followers on Instagram and over 107,000 on TikTok puts things plainly: “Optics are everything to influencers,” she told me via Zoom. There are, in her mind, three key reasons for this. “First, you obviously want to look like you’re going to cool things for your followers, and you want to create cool content for them. So to do that, you have to be in the cool spots. So you want to look like you get invited to all the hottest things, and you want to be able to produce content that could potentially make you money at those things,” Gerard said.

“Second, you want to be going to those things to connect with great brands and also to show potential brand partners that you are well connected. So in going to the hottest party, maybe you don’t end up working with that brand, but maybe their competitor sees you there and that can end up being something lucrative for you, even if maybe you [weren’t] dying to get dressed up and go to that party that night.”

Finally, she explained: “Being an influencer is rather similar to being a freelancer, in that you don’t necessarily have a boss keeping track of your KPIs and goals.” Gerard finds herself measuring her accomplishments via “internal optics,” which means “checking in with myself, [and asking], ‘Does it look like I’m doing a good job? Does it feel like I’m doing a good job? Am I making money?’ There are a bunch of events that, [previously,] as an editor, I didn’t realize certain people were being paid to attend.”

The shows, parties and events one attends can also speak volumes — at least to those in the know — about their “status,” Gerard said. She noted that the front rows of shows like PatBo and Cynthia Rowley are often filled by influencers.

For Gerard, who lives in NYC, attending the shows does not cost money, and the week presents lucrative earning opportunities. A quick look at Gerard’s social media pages throughout the week shows that she had a partnership with NYFW: The Shows and Afterpay, though contracts prohibited her from confirming her partnerships.

And while the financial opportunities are good, NYFW is not actually the best time to create content one’s followers are excited about. “I noticed that my views were significantly down this week — drastically so. And I think that’s because TikTok was pretty oversaturated with fashion week content,” Gerard said. She called the season that ended on Wednesday “outrageous,” noting that lines and guest lists both seemed more inflated than in past seasons.

Kelsey Kotzur echoed a similar sentiment, sharing that her engagement also dipped during NYFW. Kotzur has 48,000 followers on Instagram and upward of 141,000 on TikTok. “It’s one of those things that I feel obligated to do, because this is kind of like the fashion Olympics,” she said. “But at the same time, a lot of the events are not necessarily worth it. You spend so much time picking out outfits, you spend so much time on the subway or in an Uber, and then you get to an event for 30 minutes. It’s a quick hello and then you get a drink, maybe, and that’s kind of it. Sometimes it feels like [if you go to] one event, you’ve gone to all events.”

That said, though Kotzur took a more cutthroat approach to selecting the events and parties she attended this season, she still went to every runway show she was invited to. “I said yes to all shows, because those are so fun. And those are what’s exciting about fashion week.” Kotzur planned her schedule last minute and, as such, did not work on any paid partnerships specific to fashion week, she said. She did, however, borrow clothes from Shopbop to wear to events, as part of a no-strings-attached, unpaid deal.

She said the social interactions are what keep her attending fashion week events, as well as the networking opportunities. She added that she is not trying to reinvent the wheel, when it comes to the content she creates during NYFW. “I place the importance during this week on trying to have as much fun as possible and trying to be as creative as possible with my outfits, while still being me. [I also want to] see my friends and make connections and network. Because, for me, this is like a business week.”

David Evan Ruff, who is a part-time influencer, in addition to being a college student, also likes that the week is also full of important networking opportunities — and, he said, it’s a chance to have a bit more fun with his personal style. Ruff has 107,000 followers on Instagram and 41,000 on TikTok. He attended the first half of NYFW before he had to return to school. “The motivating factor for me was to have face time with the brands I work with and with brand agency reps,” Ruff said. What’s more, NYFW allows him an opportunity to play with fashion in a way he doesn’t always have the chance to do as a junior in college. “It’s a fun time to express yourself. For example, I wore a skirt for the first time during fashion week,” he said. “I don’t think I would have [done that] on my college campus.”

Allegra Shaw (363,000 followers on Instagram and nearly 122,000 on TikTok) has been attending NYFW since 2018 as an influencer. However, she lives in Toronto, so unlike some of the other interviewees for this piece, it comes with a cost — especially given that she brings a team member, too. This year, part of her stay in NYC was covered by Revolve — she came to New York City to attend Revolve’s second-annual Revolve Gallery, as part of a larger partnership she has with the retailer. As Shaw has a larger following, she is often dressed in loaned clothes by the brands hosting the shows she attends. This season, those included Altuzarra, Proenza Schouler, Tibi and Michael Kors, to name a few. When you are dressed by a brand, Shaw said, you are not required to post — but you probably do, in the interest of maintaining a good relationship. “I will always post a show in my [Instagram] Story, because my followers really like to see the runways, too.”

I asked Shaw if she plans to keep attending NYFW. “I’ve been thinking about that. It has changed a lot. I think I’ll still come, but I’ll take it slower. I’m not a Gen-Z TikToker, and I do feel like a lot of the events are [catered to TikTokers], which I totally get; that is what is going off right now. I am still relatively new [to fashion week], but I don’t feel super ingrained, so I’m not really sure where I fit in,” Shaw said.

But, she’s also becoming more of a pro as time goes on. “You can say no [to more events] and do what you want to do and make it what you want.”

Ultimately, I asked Gerard, “It’s still sort of about seeing and being seen, right?”

“See and be seen … and then film yourself and take a couple more pictures, so they can see you again later,” she said.