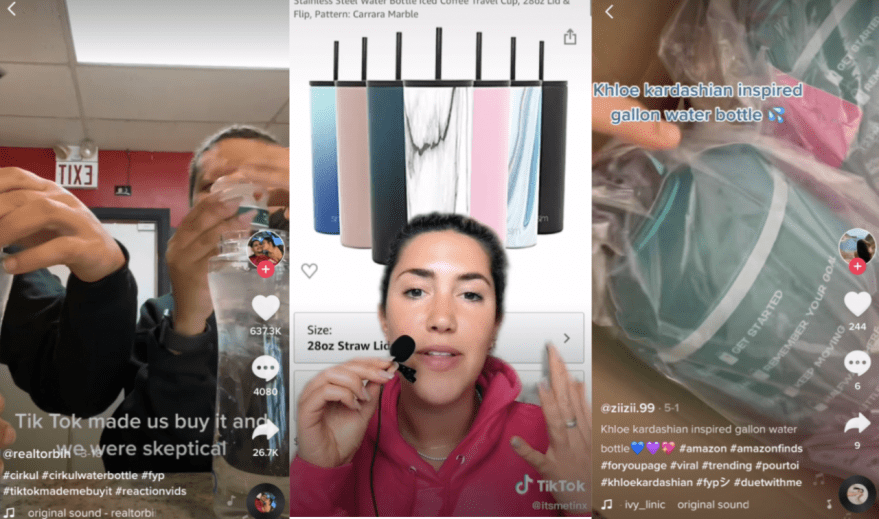 Water — yes, water — is trending across social media. No matter who you are, and no matter what corner of the internet you frequent, there is a community of hydrators ready to increase their water intake with you, all with the help of a certain water bottle.

There have been “status” water bottles for ages — from basic Nalgenes (or Nalgenes as merch, allowing people to show their allegiance to a brand) to Bkr bottles to S’well. In 2019, there was the rise of the VSCO girl, whose puka necklaces and Birkenstocks would have been incomplete without a Hydro Flask water bottle. But in the current work-from-home era, especially as opportunities for content have been limited, the humble water bottle has taken on a life of its own. The hashtag #Hydration, which is often linked to content related to nutrition, fitness and beauty, has 165 million views on TikTok.

Christina Najjar, whose account @itsmetinx has 1.2 million followers on TikTok, introduced her fans to the Classic Tumbler by bottle company Simple Modern in October 2020. She said that she’d been influenced to buy it by her friends (and former Victoria’s Secret Angels) Jasmine Tookes and Sara Sampaio. “It literally changed my life. I carry it around like a baby, I’m one hydrated bitch,” she said in an October 2020 post, which has 810,000 likes and 4.6 million views. She compared the tumbler to an “adult sippy cup,” thanks to the straw.

“About two hours after Tinx posted, we started getting texts from friends and family, saying, ‘Hey, there is a post about you guys that is blowing up,’ which was really fun to see. Up to that point, we hadn’t really been on TikTok much,” said Chris Hoyle, CMO of Simple Modern. The company is privately held and does not publicly discuss performance. Hoyle, however, said that Tinx’s support had a “favorable impact.”

Stanley, meanwhile, has made water bottles since 1913, but its Adventure Quencher Travel Tumbler (known colloquially to its fans as “the Quencher” or “the Cup”) is experiencing a renaissance. Initial popularity spiked thanks to The Buy Guide, a shopping blog that now features an entire web page dedicated to “the story of the cup.” Utah-based influencer and mom Rachel Parcell (1.1 million followers on Instagram) is among fans. Terence Reilly, global president of Stanley, said the product’s early popularity was primarily word of mouth. It earned a 33,000 person waiting list from November 2020 to June 7, 2021. On June 7, the Quencher was restocked and sold out again in five hours. The waitlist is now back up to 23,000. The brand has since engaged in paid influencer marketing, working with influencers like Peloton instructor Emma Lovewell and Courtney Quinn (@colormecourtney on Instagram; 752,000 followers). Reilly called Quinn an “important” influencer and noted that she’s shared the product organically since the partnership. The hype continues. On June 23, The Buy Guide posted an Instagram post to its 120,000 followers, helping to facilitate sales of the cup for those who hadn’t managed to order prior to the sell-out.

Waterdrop, which sells water bottles and tiny flavored cubes, has also gained popularity with influencers and their audiences. The Austrian brand has done paid partnerships with popular lifestyle influencers like Grace Atwood (169,000 followers on Instagram) and Emily Schumann (548,000 followers on Instagram). The brand has worked with “hundreds of millennial influencers — both macro and micro — in the lifestyle, health, wellness and home segments,” said CEO and co-founder Martin Murray. He said the brand is “especially popular among young moms and females ages 20-30 who are working to make a name for themselves in the influencer space.” The strategy has grown the brand’s Instagram following by 100% since its April launch in the U.S.

On Instagram, writer Danielle Prescod has an Instagram story highlight called “Water Cult,” (a term she coined on Instagram) chronicling those who tagged her in their purchases of half-gallon and gallon water bottles. Khloé and Kim Kardashian have also posted their water bottles, which feature motivational phrases prompting the user to keep drinking, like “Remember your goal,” “Don’t give up” and “Keep chugging.” The $18 Fidus Motivational Water Bottle, which Khloé Kardashian has, has nearly 18,000 ratings on Amazon, with many commenters noting just how comically large it is. Others swear it is the only thing that has actually helped them stay hydrated. Interestingly, Coldest, another brand with a social media presence, including 342,000 followers on TikTok, has sponsored ads on the platform comparing its temperature-maintaining technology to the Amazon gallon bottles. Meghan Casey, a ventriloquist influencer with 1.8 million followers on TikTok, did an ad for The Coldest in January, illustrating the comparison.

According to Chelsea Golub, M.S., R.D.N., “An easy way to figure out how much water we should be having is to take your body weight in pounds and divide it by two.”

“Not drinking enough water will cause dehydration, which can lead to dizziness, headaches, fatigue, dry mouth and skin, and constipation,” she said. While overhydration is far less common, it should be noted that it has its risks, too. Symptoms can actually be similar to those of dehydration.

Most people, however, need an extra push when it comes to getting adequate hydration. For those who really struggle, there’s Cirkul. Cirkul sells water bottles, but its main product is a flavor cartridge, which allows users to customize the level of flavor. Like reusable water bottles, it’s an eco-minded product, given that the included flavoring can last for up to 10 refills. The cartridges use the same amount of plastic as a bottle of Gatorade, said Garrett Waggoner, Cirkul co-founder.

Though the company launched in 2018, it too is having a moment — its order volume grew more than 300% from December 2020 to March 2021. The #cirkulwaterbottle hashtag now has 38 million views on TikTok. In the videos, people demonstrate their shock at how the product works, which dispenses flavor without impacting the color of the water. The brand’s Brew Sips flavors, many say, makes water taste like a latte.

“As it evolves, especially with TikTok and the increased awareness on that platform, there are new customers coming into the ecosystem,” Waggoner said. “The Gen-Z and millennial male and female are eco-conscious. And this is less plastic and health-conscious.” Most of the flavor cartridges contain zero calories and use sugar alternatives like Stevia.

“In general, they just want to drink more water,” he said. “And sometimes they struggle with that.”