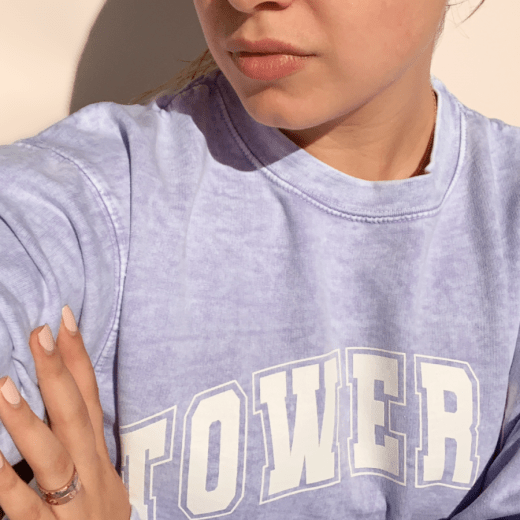 Would you wear a sweatshirt stating the name of the brand of your favorite lip gloss? Many people would — and increasingly, they are.

Wearing merch — whether it’s repping a band, a restaurant or a brand — has always been a quick and easy way to showcase one’s allegiance. It serves as a public declaration of membership to an unofficial club. “People like to support brands that they believe in and that share their same values, and that’s been especially true over the past year,” said Amy Liu, founder of Tower 28, a clean makeup brand that’s also sold sweat sets and bucket hats over the last year.

Founders of brands that have launched merch say the demand has come from the customers. When 2.5–year-old skin-care brand Then I Met You released a sweatshirt in the brand’s signature periwinkle blue ($60) in October, founder Charlotte Cho said the response wasn’t that different from that of any product launch. “Our community had been asking for it since we launched. They love our signature periwinkle color, and they wanted us to make everything from candles to cozy sweaters. It took us years to find the right color and quality of our periwinkle pullovers, and when we launched, we were met with so much excitement and enthusiasm from our community.” Since then, Cho has spotted a number of brand fans wearing the merch out in New York City. “There is an instant connection and feeling of belonging that it elicits,” she said. “I have approached them and thanked them for their support.”

Even before Then I Met You launched its sweatshirt, fans were wearing their own periwinkle clothing to the brand’s events, Cho said. The brand is built around the Korean concept of “jeong,” meaning a deep emotional connection. Cho believes the brand’s messaging around the importance of such connections has resonated, and that’s part of why the brand’s community is so strong. Then I Met You has referenced jeong on social and its website, and Cho has an upcoming book dedicated to the concept, “The Little Book of Jeong.”

“When a community resonates with your brand, they want to incorporate it into their lifestyle and be an ambassador of the brand,” Cho said.

Though the existence of beauty brand merch pre-dates Covid, the desire to feel a sense of belonging has only increased.For Johanna Peet, founder of 5-year-old clean skin-care brand Peet Rivko, the launch of merch directly correlated with the desire to create a “product that felt fun, supportive and engaging for our community during a difficult time.” The Down to Earth sweat set launched in April of 2020 (with a sweatshirt, $45, and sweatpants, $48). It was announced on social, and Peet’s friend and adviser to the company, actor Aubrey Plaza, also posted about the launch. The styles sold out in one day — Peet said she’d made a couple hundred — and the brand opened a waitlist for pre-orders. “Everyone was suddenly working from home, and we wanted to create something simple that met our customers where they were in this moment and also gave back. We donated 15% of the profits to NRDC,” Peet said.

Tower 28 launched its first merch in celebration of the brand’s 1-year anniversary, in April 2020. It was a “super cozy acid wash sweatshirt made in L.A.,” Liu said.  It was such a hit that the brand decided to create more merch in tandem with the launch of a collection of lip glosses, in September 2020 (the sweatshirt was $45, the sweatpants $40). Olivia Wilde was seen wearing the brand’s first sweatshirt in July, which was $40.

For the founders of Bathing Culture, known for its Mind and Body Wash, selling merch forwards the brand’s mission to share “the joy and peace of bathing.” Co-founder Tim Hollinger said selling merch is something that has to be done thoughtfully and responsibly. “We only do limited runs and partner with artists on environmentally friendly items,” he said. “Our shirts are all ethically made with 100% recycled cotton fibers that we’re giving a second life. Great merch is limited in supply and not wasteful.” Though it’s not merch, he noted that upcycling the brand’s colorful (and easily identifiable) bottles has also been extremely popular with the brand’s community. At the end of the day, merch is about community — and after a year at home, everybody’s looking for more of that.

Tower 28, Then I Met You, Peet Rivko and Bathing Culture are just a few of the brands that have launched merch in the last year. Prior, Supergoop launched a T-shirt and a neoprene hat imploring the wearer’s audience to “Wear sunscreen.” In addition, Glossier has a pink hoodie that was all over social media when it first launched in October 2019 (though the brand’s first sweatshirt had actually launched in 2017), and Tracee Ellis Ross’s Pattern also sells a sweatshirt, to name a few examples.

At the end of the day, merch is about community. And after a year at home, everybody’s looking for more of that.