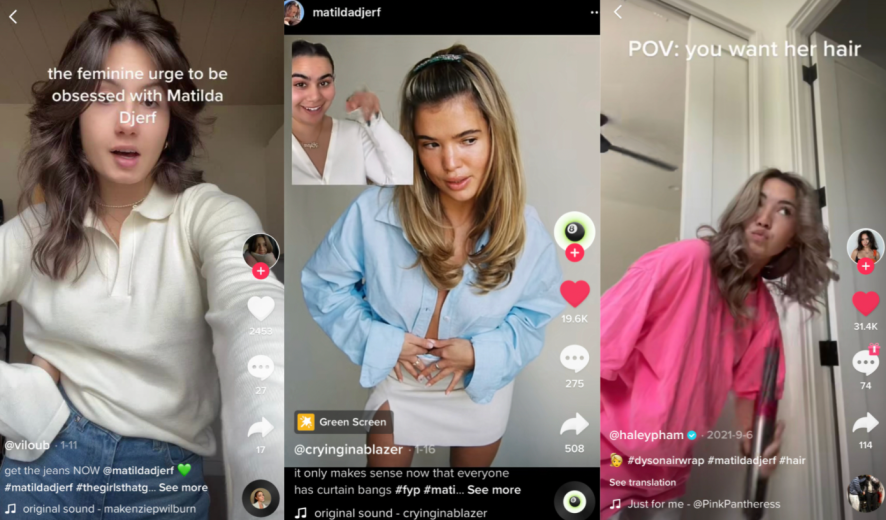 Glossy Pop Newsletter: Who is Matilda Djerf, and why is TikTok obsessed with her hair?

Generally speaking, influencers are bigger on one platform than another. Think: the OG bloggers currently struggling to keep up with creators on TikTok and Reels. And while Matilda Djerf has more followers on Instagram (2 million) than on TikTok (481,000), her popularity — or, as TikTok would say, “chokehold” — transcends any one platform. She serves as inspiration on Pinterest and Instagram alike.

On TikTok, where there’s nothing more potent than a transformation, you’ll find countless videos of Djerf’s fans recreating her looks — most often, her hair looks. That’s why we need to talk about Matilda Djerf’s hair. Though perhaps nothing out of the ordinary, at first glance, it is, unquestionably, beautiful. Djerf has long blonde waves and face-framing curtain bangs that shape her full cheeks. She does her hair using Dyson’s Airwrap, which has a cult-like following among those who can afford its $550 price tag. Her signature style is big, round voluminous waves, like a modern Farrah Fawcett.

On TikTok, videos about Djerf have been paired with a sound from “Mean Girls”: “I saw Cady Heron wearing army pants and flip flops, so I bought army pants and flip flops.” Another post in which user Haley Pham (1.4 million followers) styles her hair like Djerf is labeled, “POV: you want her hair,” and uses Matilda Djerf’s name as a hashtag. Another reads, “the feminine urge to be obsessed with Matilda Djerf,” and is set to the popular sound: “I already told you. The girls that get it, get it. The girls that don’t, don’t.” The hashtag #matildadjerf has 18.2 million views.

Finally, a post by @peachesandthemangoz pictures user Gabby Schiesser standing and holding her phone, hand on her hips. A text overlay reads: “i don’t think anyone truly understands the chokehold miss matilda djerf has on me she is the it girl of the century. everything about her is beautiful. i’m booking another hair appointment to get curtain bangs again. there is nobody on this planet who can seriously make me consider paying $50 on a rainbow headband. i love her sm”

A post by Djerf herself in which she is sitting on the floor using her Airwrap has 2.5 million views and 275,000 likes.

Naturally, I needed to talk to Djerf, who lives in Stockholm.

On Zoom, her fans will be pleased to know, her hair is just as perfect as it is on TikTok and Instagram. Djerf recalled that she started posting on Instagram in 2016, though it was not until 2018 that it became a career for her. “For me, it wasn’t like, ‘I want to be an influencer.’ It just kind of happened — which I’m very blessed that it did.” In 2019, she launched Djerf Avenue, a clothing line that sells minimal clothing perfect for a, kind of, rolled-out-of-bed-looking-impossibly-chic vibe.

She had done design collaborations with other brands, but like so many creators/collaborators-turned-entrepreneurs, she wanted to assume more creative control. “I realized. ‘OK, so we’re selling out.’ I got to be creative, but I didn’t get to decide everything. Like, I didn’t get to decide where pieces were made, in what exact fabric, the working conditions… So that’s when me and my boyfriend [of nearly 7 years], who is also my business partner, were like, ‘OK, maybe let’s try to see what happens, or try to launch a brand with no prior experience whatsoever,’” Djerf said.

Though curtain bangs started making headlines in 2020, Djerf cut hers in 2017 — a true trendsetter. “I am absolutely obsessed with Matilda’s hair and have been for years,” celebrity stylist Justine Marjan told me. “Long before her hair was trending on TikTok, it was trending on Instagram. In fact, it was the reason I started following her years ago.” For Djerf’s part, she said that while curtain bangs have, in fact, trended on and off since 2017, she hasn’t abandoned her signature look.

She joined TikTok a year ago because she wanted to be where her followers were. “I wanted to connect with them on the platform that they preferred,” she said.

Soon after she joined, however, she started to receive messages with videos of her hair. “They were like, ‘Oh my God, you’re a real person.’ I get comments on TikTok that are like, ‘I’ve seen her all over Pinterest, she’s a real girl? Now I finally know who she is.’” Hairstylists from around the world frequently send her DMs saying that their clients bring them her picture nonstop.

I asked how that felt, to which Djerf said, “It’s wild; it’s weird. Because, for me, my hair is my hair. I get so many messages from girls saying they cut their bangs, and they don’t look the way they look on me — and I feel so bad.”

She loves the re-creations, though. “One of the most positive things about social media is that you really can inspire people. It’s just so much fun. And a lot of the time, I’m like, ‘Wow, that looks better than my hair. Like, I’ll fly you to Sweden. Do my hair, please!’ Because half the time, with my hair, I don’t know what I’m doing.”

FWIW: Djerf recently pinned those famous curtain bangs into a Bumpit and set TikTok aflame, with videos declaring the Bumpit back — because Djerf said so.

Still, while Djerf’s hair is beautiful, it’s not particularly groundbreaking. It is bolder than the subtle, beachy waves that have dominated the “cool girl” hair look over the past few years. And because of its boldness, it can also dress up a chic, but decidedly simple outfit — Djerf is frequently seen in her brand’s bestsellers, like the “Favorite Pants,” a wide trouser, and the “Breezy Shirt,” an oversized white button-down.

After two years of dealing with the pandemic, “​​I feel like people are ready to feel gorgeous, feel confident, feel glam,” Djerf said. “People kind of want to put in that extra effort.”.

I reached out to Schiesser, 21, the girl behind the “chokehold” TikTok. “I originally found [Djerf] through Pinterest,” she told me. “She was consistently on my feed, so I did some digging to find her Instagram.” Since, she’s become a full-fledged fan. “She originally appealed to me because of her iconic hair, but overall, I think she is truly beautiful in so many different aspects. Everything about her just seems very elevated. As someone who grew up [alongside] almost all social media platforms, I’ve been exposed to probably thousands of influencers. Matilda just really seems so real — almost like I can trust her, when I’ve never actually met her in real life. Especially with influencer and social media culture these days, ones who don’t appear to do things only for money and clout just seem pretty hard to come by, in my experience — or in my algorithm.”

Since launching Djerf Avenue, Djerf (the person) has been more selective about brand partnerships. You’d think she is a Dyson partner, but she is not. “I wish,” she said. “I’ve spent so much money on Dyson products, and they’re so expensive. But, no, it’s just me truly like loving their stuff.”

Initially, such partnerships, in addition to modeling gigs, helped finance launching her own brand. Though fashion has always been Djerf’s main way of expressing herself, Djerf Avenue sells some bedding. And Djerf said that some kind of hair accouterments are not out of the question for the brand’s future. Surely, they’d be in demand.

Peyton List is well aware that celebrity beauty brands are launching more frequently than ever, though, she said, there weren’t as many when she started working on Pley Beauty over two years ago. List founded the brand, which launched direct-to-consumer on Wednesday, with Creative Beauty, the new incubator created in partnership with the talent agency CAA. While celebrity brand launches have become notorious for manipulating the media machine with a group Zoom and nary an interview, List spent a solid 45 minutes talking with me about her new brand, her journey from actor to entrepreneur, and the sense of responsibility she feels to her fans, including her 19.2 million Instagram followers. Read the rest of the story here.

In the DMs with Laura Lee

Sephora enters the sexual wellness category with Maude and Dame

Glossier lays off over 80 employees

Tessa Thompson is the new face of Armani Beauty