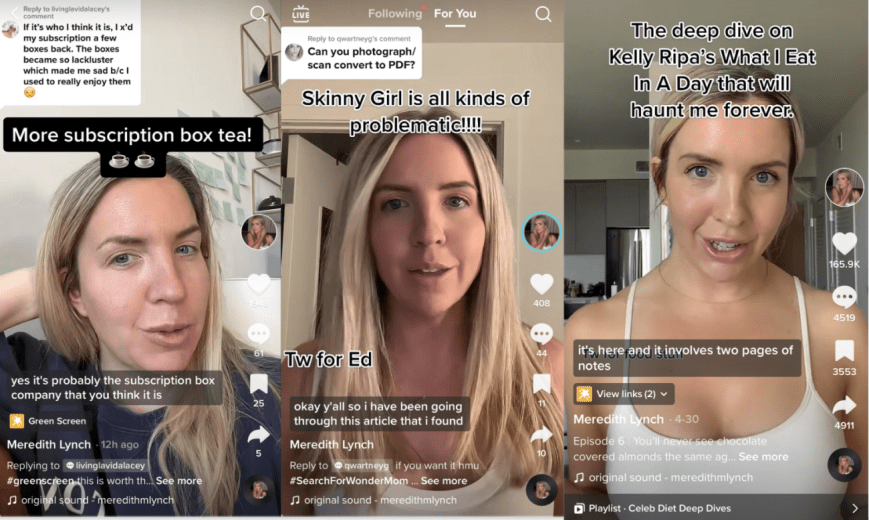 In the past six months, Meredith Lynch has received two cease-and desist letters from powerful, wealthy, famous women. The source of the drama is Lynch’s TikTok, where she can be found explaining her investigtions on brands to her 193,000 followers. In one case, she looked into why subscription boxes, such as Rachel Zoe’s Curateur, had been receiving complaints from unsatisfied customers on Instagram. In another, she dug up records of trademarks she believes are held by Bethenny Frankel.

Like so many others, Lynch joined TikTok during the pandemic. She started mostly as a “lurker,” she said. After a cross-country move to Los Angeles from Boston put her far away from friends and family, she started creating content herself. For a time, she was creating traditional beauty influencer content; trying out viral beauty products and sharing her point of view.

“I was buying a lot of stuff that I didn’t need. I started to realize that I was getting sucked into this [world of], “Oh, my God, I have to get this viral mascara; I have to try it. I have to do a video and show it.'”

When she grew weary of the beauty influencer rigamarole, she started to do behind-the-scenes research on the beauty industry out of personal interest. “I don’t get brand deals anymore,” she said, of the direction her TikTok career has taken since pivoting her content. It’s important to note that Lynch not only has a full-time job in higher education but is also pursuing an MFA in creative writing.

“I started to [create] more content, digging deeper into celebrity brands and the ways the beauty industry and diet industry are preying on not just people who identify as women, but all people,” Lynch told me on Zoom. She started creating different series on TikTok; one chronicles what celebrities eat in a day. A video on Kelly Ripa‘s diet, posted on April 30, led to a spike in new followers; it has 1.7 million views.

Then, over the summer, Lynch started looking into the world of subscription boxes, particularly Curateur. She said she was prompted by the fact that her followers were asking her to make a video about what Zoe eats in a day. That information wasn’t readily available, but as Lynch poked around Zoe’s Instagram and her business’s Instagrams, she started to notice a pattern: comments from customers complaining they hadn’t received their boxes or that they’d been charged more than once. In the comments of Curateur’s three most recent Instagram posts, customers have left comments complaining about delayed shipments. The Curateur account has replied in comments, apologizing for delays and ensuring the next box will be shipping out soon.

“Then I started hearing people complain about the actual products [in the box], like, ‘I wore this once and it broke.’ And I noticed that a nice makeup line [Marc Jacobs Beauty] featured in one box had closed like a month and a half before [it was featured in the box].” For example, in an October 8 post, user @denajb wrote, “My necklace broke after the 2nd time I wore it 😢,” user @charlotte_bichon commented, “Mine broke instantly.” User @dm_yates wrote, “Love this necklace so much, but mine also broke the 2nd time I wore it. My friend’s broke too.” Curateur’s social team responded to all three commenters, encouraging them to reach out via email.

Before Lynch could continue to investigate, she received a cease and desist, accusing her of the “potential to defame,” she said. “They believed that I had Photoshopped the Instagram comments [shown in the background of my TikTok].”

When reached for comment, a rep for Zoe said, “We are among many companies that have sent a cease and desist to Meredith Lynch for defamatory videos. Free speech does not extend to intentionally disseminating slanderous false information to harm other people or companies.  Furthermore, her baseless comments were offensive not only to our customers but also to the many small businesses who have partnered with us to serve our community.”

Ultimately, Lynch took down the videos. “It was a very hard moment for me,” she said, “because I had worked really hard to find this information and I felt like I was letting people down. I believed [the contents of the posts] to be accurate. I’d done a lot of research, but I don’t have the money to go up against a big law firm,” she said.

Most recently, Lynch received another cease and desist from Bethenny Frankel, who, she said, had blocked her on TikTok months prior. “I was surprised, but not shocked, given that I had heard on the news she was suing TikTok,” Lynch said. Frankel, the former “Real Housewives of New York” star, has recently become known for her own beauty content on TikTok. She has 1 million TikTok followers.

“I’d done a video where I’d shown some things she had trademarked.” The video claimed Frankel had trademarked the phrase “It’s a scam.” She found the information while looking up trademarks for Frankel’s brand Skinny Girl via public record. The “It’s a scam” trademark is held by a company called Even Better Bites, which holds 12 trademarks; its others include “Bethenny mentions it all,” “B mentions it all,” “The big event with Bethenny” and “Just B.” Lynch found that the lawyer and address listed for the trademarks were the same as the one listed for Skinny Girl, and believes that means they likely also belong to Frankel. A 2021 Cosmopolitan article on Frankel’s net worth quoted Forbes and stated that Bethenny sold Skinnygirl liquor company to Beam Suntory for a reported $100 million in 2011, but retained ownership of the Skinnygirl name.

Lynch immediately took down the content she believed had prompted the cease and desist. “Other than that, I kept up all of my Bethenny content,” she said. If you scroll through Lynch’s TikToks (there are many), there is a lot of Frankel content. In a May TikTok post, she summarized a peer-reviewed journal article, “Food marketing as a pedagogical act: Teaching women to consume skinny,” which specifically called out Frankel’s Skinnygirl brand.

Though Lynch has been forced to remove some of her work, it has only left her feeling more invigorated. She feels passionately that, in exposing some of the ways celebrities are able to use their wealth and power, she is, in her own way, speaking out about the wealth gap. “I want the world to be an equitable, kinder place. And I know some people say, ‘But then why are you calling these people out?’ The thing I’ve realized being on TikTok is that there are just so many regular people in the world, and all we keep doing is uplifting celebrity. I think it can be really harmful,” she said. It is, of course, true that celebrity brands get a lion’s share of press and retail shelf space today.

Iskra Lawrence and The Center’s Saltair expands into hair care

Are you ready for gas station sunglasses?