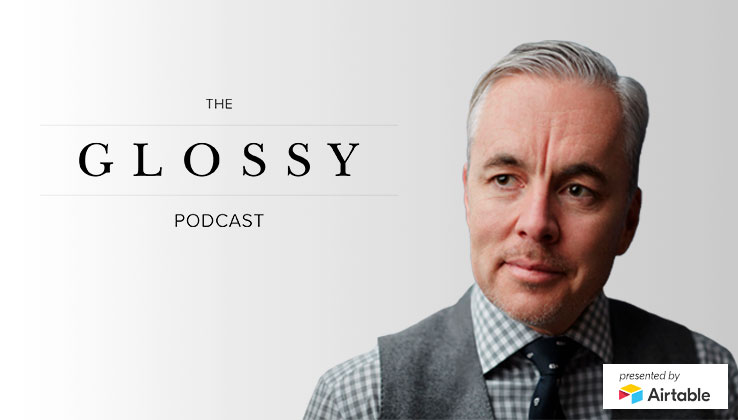 Lawrence Lenihan is the co-founder and co-CEO of Resonance, a venture backer of small fashion brands that wants to give them a chance to compete on the Zara level.

What Resonance does is provide alternative manufacturing and fabric sourcing options to small apparel and accessories brands and designers who want to test new designs and pieces in the market without having to make huge investments. The goal is to use Resonance’s $5 million apparel factory to drive the cost of garment creation down to zero (or about $50, which Lenihan says is basically the same thing) and to make the cost of producing 1,000 pieces of clothing the same as producing one.

It’s going to take a long time to pull off, and Lenihan and his co-founder and co-CEO Joseph Ferrera have long-term goals. By 2030, for example, he wants Resonance’s facilities to operate 300 small brands, even if the terms of that operation are still being figured out.

Lenihan joined the Glossy Podcast to talk about how to bring the Zara model down to businesses on the smallest level, how data has interrupted creation and what’s to come of the billion-dollar apparel brand.

On the Zara effect
Resonance plans to put small designers (Lenihan calls them “creatives” because the people who work at Resonance don’t need to have fashion backgrounds to make product there) on equal footing with the massive corporations — particularly Zara — that have changed the format of fashion businesses.

“We create businesses that amplify the designer and let them compete on the level of Zara — not by making cheap shit, but by making product on a cycle that makes sense,” said Lenihan. “I don’t care if you’re Chanel; you’re competing against Zara, at least on some level. What Zara has done is reset the value curve so the low price is the norm, and if you have a high price, you better have high-quality product to back it up. And [for small designers,] these aren’t art projects; they’re businesses. So we want to build businesses that can compete today.”

On data vs. designer
Lenihan’s belief is that if it’s cheaper to design, fewer fashion brands will need to rely on customer data to make more informed product, trend and inventory decisions, because the overall risk of taking risks is reduced.

“The reason everything in this industry is the same is because we’re all looking at the same data. If you have the same tools and the same data, you’re going to come to the same conclusions. Creation is not continuity; you don’t know that you want something if you don’t know it exists, and that’s what we can create,” said Lenihan. “We can compete against AI-driven trend design and all that nonsense by enabling designers with a factory where we make our own material, sew our own garments, incorporate the tech infrastructure — where every aspect of the brand is run. We’re enabling them to compete on variety.”

On the future of the billion-dollar brand
Of course, the question is: How do these companies scale? Should they even scale? Lenihan said that apparel companies should only be as big as they need to be, and no apparel brand really needs to reach a billion dollars to be successful.

“I don’t think the corporate company structure of the future has been written yet, but I think it’s the end of the billion-dollar brand. Nobody wants to be a billion-dollar brand anymore. There’s such hyper segmentation now,” said Lenihan. “When you push brands past the size that they should be, they become unprofitable, they become weak, and they die. I’d rather have a $10 million brand making $2 million in profit than a $100 million brand making $2 million in profit. That brand has one bad season, and it’s gone.”