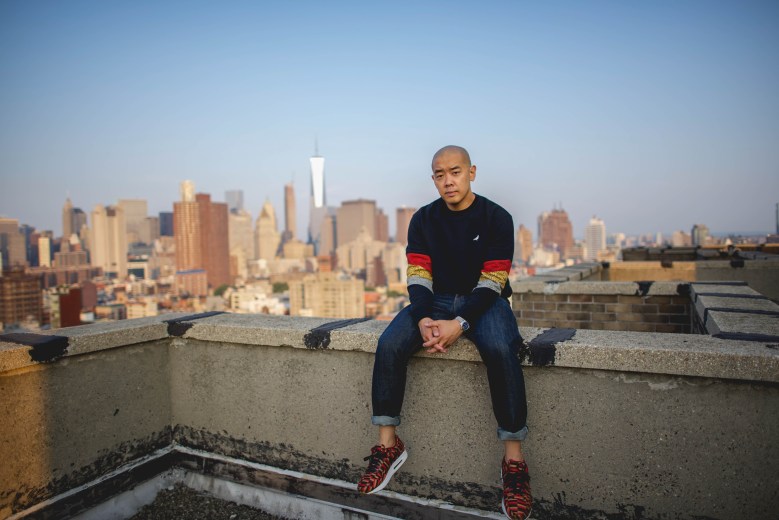 Designer Jeff Staple: ‘Streetwear is a parasite that is infecting all aspects of society’

Before founding Staple Design, Jeff Staple was studying communication design at Parsons School of Design, sneaking into the silkscreen lab after hours to create small batches of shirts to sell at shops in SoHo. For Staple, this wasn’t about designing clothes. Instead, he wanted to find a way to growth-hack his messaging.

“I wasn’t really trying to be a full-fledged fashion designer, because if you did, you studied fashion design as your major,” said Staple. “I really just saw an opportunity. If you wanted to convey a message as a graphic designer, you could do it on paper, which is how it traditionally would be done. I saw a very powerful medium in the T-shirt. If I could put a message on a T-shirt and give 100 shirts out to my friends, if they’d wear it on the subway, trains or buses, my message would get out there a lot faster than if I just hung a poster in someone’s room.”

Now, nearly two decades later, Staple is widely recognized as one of the founding fathers of streetwear. His company has produced collaborations with the likes of Cole Haan, Dr. Martens, Coca Cola and even Facebook.

In the fifth and final episode of Glossy Trend Watch: Streetwear Edition, fashion reporter Danny Parisi sits down with Staple to discuss the rising popularity of the collaboration model, the difference between collabs and licensing agreements, and the way street culture is infecting society. Edited highlights below.

The win-win of collaborating
“I think collaborations, in general, have become a central part of society, really. They’re central to streetwear, in particular, because there are inherently a lot of limitations for streetwear creators. Brands that start out in streetwear can, often times, only do A through G really well; the rest of it they can’t figure out because of limited resources, limited funds and limited expertise, and they need somebody else to come in. If you have a really cool T-shirt brand, for example, and you want to make a shoe, that’s really hard. You have to open the molds, go to China, get something sourced. But if a sneaker brands comes and says, ‘We’ll make a shoe with you,’ that’s really awesome. The win-win situation is where the T-shirt brand that never could have made a shoe can now make a shoe, and the shoe brand that needs a connection to a demographic the T-shirt brand has in their left pocket now gets access to that audience. So it’s a nice yin-yang situation, and that’s why it’s inherently happening more in street culture, because of that shortage in resources.”

Defining a collaboration
“There’s a distinction in my mind between a collab and a licensing deal. There’s a lot of licensing deals out there that are calling themselves collaborations, and that’s not fair to the people who do collaborations, because there’s a lot of work, energy and backstory that goes into them. When I’m doing a collab with Dr. Martens, I’m not just taking the logo, slapping it on and paying them a royalty. I’m up at 3:00 a.m. WhatsApp-ing with the design director in London about Dr. Martens. There’s actual work, whereas when it’s a logo slap, younger people who don’t know the difference and the nuances think, ‘Oh yeah, they did a collaboration with Garfield.’ No, they just took logos. That’s it. I really want people to understand the difference between licensing and collaboration.”

The spreading of street culture
“I see streetwear as a parasite that is infecting all aspects of society. I’ve said this for well over five years now. If you look at past subcultures of society — hip-hop culture, skate culture, punk culture — these sort of ‘isms’ that existed, and they each sort of had their falling out. What street culture is doing is melting all of these things into one big melting pot. The beautiful thing about that is now high-fashion, couture fashion is falling into the trappings of that melting pot, and it’s getting infected. When I say that, I mean we are getting in their systems, and they’re buying into us. In the near future, street culture will have infected all aspects of society, and it will get to the point where there’s not even a differentiation between high fashion and street culture anymore. If everything goes right, and the youth continue to do what they should be doing, which is anti-establishment, they should be able to build something that will be anti-street culture, and that will be the new cool thing.”