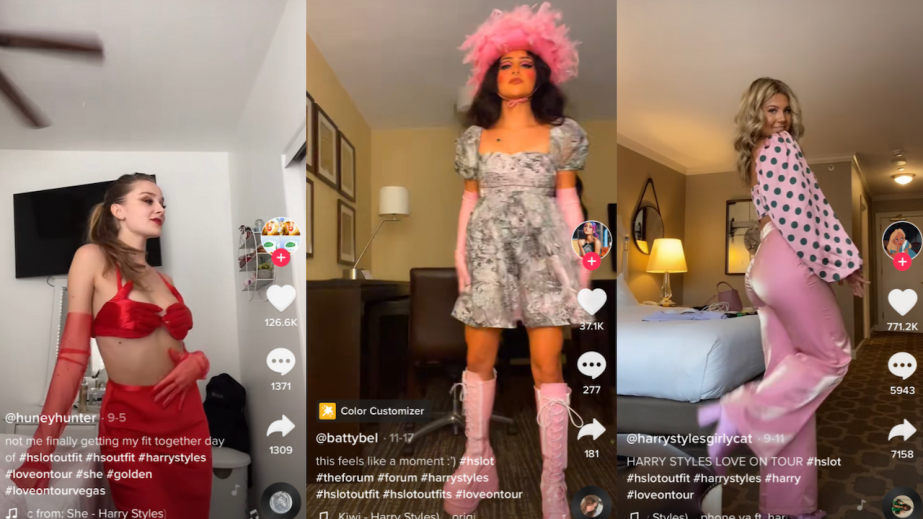 In September, as Harry Styles kicked off his tour, dubbed “Love On Tour,” online styling service Stitch Fix saw a 160% year-over-year spike in customer requests related to the tour or inspired by the singer’s eclectic look. Styles, who is a face of Gucci, was famously featured on the cover of Vogue wearing a Gucci gown at the end of 2020. And in November of this year, he launched his beauty brand, Pleasing, which labels itself a “life brand.” Among its products are four pearlescent nail polishes with vintage-inspired caps that make them look like tiny objet d’art. The packaging is a reflection of Styles’ aesthetic.

Stitch Fix shared some of the customer messages with Glossy:

The notes reflect so much about the state of fashion in 2021: Many of us felt like we’d forgotten how to dress, let alone put together a look. Plus, the edgier, gender-bending aesthetic Styles is known for is becoming increasingly popular in the mainstream.

“Clients are requesting edgier pieces with bolder colors to wear to Harry Styles’ concerts and also to emulate his style. He’s known for an androgynous approach to outfitting, a bit unconventional and eccentric. And he often couples classic basics with statement pieces that have a fun, and sometimes feminine, flair,” said Stitch Fix stylist Ashley Sanchez. “His willingness to take risks with his wardrobe has propelled him to icon status this year for our clients, who are gravitating toward his look as they want to try something different — new and bolder than their typical style. People also love how he expresses himself authentically and is very inclusive in his fashion.”

Styles also represents a modern masculinity, in which a man can wear a Dorothy (of “The Wizard of Oz”) mini dress and still be a sex symbol.

Fans know that a Styles concert is a runway for them, too — and in 2021, that was an opportunity to be relished.

Among my own friend group, the Styles tour was a hot ticket this fall, as the vaccinated returned to concerts. After a year at home, the tour presented a perfect occasion to get dressed up. Margaux Anbouba, beauty editor at Elle and vintage clothing collector, shared a text exchange between herself and a friend, the owner of Omnia Vintage, whose help she sought to source something new for the show.

Kiana Toossi, a 23-year-old graphic designer, attended “Harryween,” the Styles concert/event that took place over two nights, one of which was on Halloween. “My friend Lilly and I bought tickets back in 2019 for Harryween that was rescheduled for two years later, in 2021. So that was basically the only thing pushing us to get through these past two years. Since it’s the “Harryween Fancy Dress Party,” he asks you to come dressed up in a fancy dress or costume, and obviously, you have to listen to Harry,” Toossi said. She “understood the assignment,” she said, and showed up dressed in a replica of Styles’ 2021 Grammys look. Also worth noting: Styles performed at the Grammys in a leather suit (blazer open, showing his famously tattooed torso) and a pale sage green boa. The week after, purchases of leather suits increased by 29% in the week after, according to data from Klarna.

“I scoured the internet for the closest matches to Harry’s red carpet outfit at the 2021 Grammys. I looked up every possible pattern — houndstooth, plaid, checkered, tartan — on every secondhand or thrift site, like Depop, Poshmark, eBay and Grailed. I finally found a blazer that was, one, my size and, two, going to arrive on time. A few weeks before that, I found these dark brown velvet trousers from Monsoon and a pair of baby yellow square-toed boots from Peche. Unfortunately, I didn’t have enough time to find the right V-neck sweater or sweater vest, so I just went with something I had in my closet. These are all pieces that I was planning to re-wear, by the way! I’ve already re-worn the boots a handful of times. The last piece of the puzzle was the lavender boa he wore. The entirety of New York was sold out of boas the week before Halloween, but I eventually found a dark purple boa at [Halloween shop] Abracadabra,” Toossi said.

Sierra Tishgart, founder of popular cookware startup Great Jones Goods, found out she was going to Harryween the morning of the show and scrambled to put something together with very little time. “I ended up dressing as Belle from “Beauty & the Beast,” wearing a yellow Cecilie Bahnsen dress I had in my closet. I had actually worn it to a party a few nights before, and a few people had said I looked like a Disney princess, which annoyed me a bit at the time. Ultimately, I wore this big poofy yellow dress, red flats, red lipstick, a single red rose I bought from the bodega and a BumpIt in my hair to give it some height, mimicking Belle’s half-up, half-down hairdo.” Perhaps the best part: “Several teens at the concert complimented me, and I felt great!” she said. “I’m most definitely inspired by Harry’s bold style and confidence, and I was glad I made the effort to dress up.”

Christina Formica, a 24-year-old beauty publicist, attended four shows of the tour, putting together different outfits for each one. “He’s so comfortable with himself and isn’t afraid to wear colors and mix patterns. My style used to be bland and dark, but now I’m more comfortable wearing what I want and expanding the colors in my wardrobe. I would have never worn purple and orange multicolor pants with a purple boa before,” she said.

TikTok went crazy for the opportunity, too. The hashtag #hslot, for “Harry Styles Love On Tour,” has 1.8 billion views. And fashion-minded fans rallied around #hslotoutfit, which itself has 155 million views. Many of the popular videos center around a TikTok favorite — the transformation. For example, TikToker @huneyhonter’s post shows her at home, dressed down in sweats. There’s audio that says, “I messed up,” then Harry Styles’ song “She” begins to play — “She lives in daydreams with me (she)” — and her full concert look appears. Others have used Styles’ song “Kiwi” to show off their looks inspired by the singer. And plenty of other TikTok posts have documented Styles’ own tour looks, which were, frankly, all dreamy.

It should also be noted that “Love On Tour” was not the first time Styles’ style took TikTok by storm. The hashtag #harrystylescardigan has 88.9 million views and refers to the JW Anderson sweater that Styles wore during a rehearsal in February 2020, which took on a life of its own. It was auctioned as an NFT earlier this month. Dozens of crafty TikTokers attempted to recreate the sweater, with some learning to crochet to do so. Even Olympian and beloved knitter Tom Daley got in on the trend. His post has 1.4 million likes.

“The reason for choosing this piece was because it was such a social media phenomenon. JW Anderson thought it was perfect to end the cardigan’s story in this final iteration; an NFT,” said Nell Lloyd-Malcolm, CEO of Xydrobe, the company behind the NFT. Building the NFT, Gilbey said, took Xydrobe’s in-house team of VFX artists over 300 hours to “digitally reincarnate the cardigan from JW Anderson. We used almost the same techniques as you would if knitting it in the real world.” Finally, “A big part of this project was the decision to donate proceeds to the charity, akt. It was very important for the brand to continue the community story behind the cardigan and to make sure that whatever price it got, it was given back,” he explained.

“When it comes to rocking style like Harry’s, nothing is off-limits,” Sanchez said. “When styling a client who requests his look, I pull pieces with playful patterns and bright pops of color, ranging from neons to pastels, and looks with matching sets, even monochromatic. Harry’s also become known for his outrageous outerwear, so l will look for fun options with added texture, like velvet, or embellishments like embroidery.”