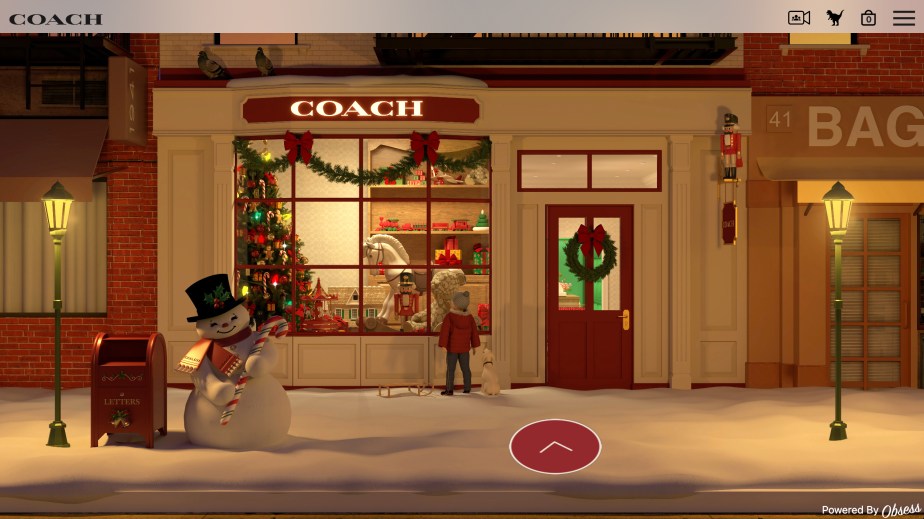 Coach and Crocs are investing in virtual holiday stores

Brands like Coach and Crocs are investing in virtual stores for the holidays, aiming to outperform last year’s e-commerce site engagement and sales through fantastical recreations of their own boutiques.

Many brands have dabbled in virtual stores, yet this marks the first year they’ve been significant focuses of brands’ holiday strategies. In early November, Coach unveiled its virtual holiday store as part of its “Feel the Wonder” campaign. Over the last two years, the brand had set up private virtual stores for retail buyers. It decided to expand the offering to customers, motivated by the popularity of gaming and virtual worlds. Customers can access the virtual Coach store on its direct-to-consumer e-commerce site.

The virtual store reflects Coach’s holiday theme of nostalgia. It features a retro gift shop, as well as a secret room only accessible to those who engage in the gamified element of the experience: They must collect fives images of Coach’s dinosaur mascot Rexy from various rooms in the experience. Each of the rooms includes shoppable products from the brand’s holiday range. Customers can also shop with their friends through a live video feature offered at the start of the virtual experience. Coach is marketing the store through press, in-store signage, its own social channels and paid digital ads.  It will remain open through the holiday period.

“Coach is always looking for ways to engage with customers in the most exciting and innovative ways,” said Renee Klein, vp of global brand marketing and digital experience at Coach. “A virtual store offers the opportunity to drive unique experiences, such as shopping with friends and livestreaming, to make holiday shopping this season more exciting online.” By December, Coach will also launch an influencer-led livestream shopping series on Instagram Reels.

According to market intelligence platform S&P Global, U.S. retailers face slowing online growth and rising price competition in the coming year. Early holiday sales are slowing in the U.S., underscoring the need to create new experiences to drive site visits and sales. According to 451 Research, cited within the S&P Global report, inflation was cited as the most important factor driving down holiday spending plans among consumer respondents who expected to decrease their spending.

“We see with gamification that consumers spend a lot more time in the stores, and they interact more and end up shopping more,” said Neha Singh, founder and CEO of virtual platform Obsess, which worked with Coach on the virtual store.

Singh says consumers who engage in the virtual store are spending as much time or more in the store as they’re spending on the rest of the e-commerce site. According to Obsess, virtual store shoppers spend 20-70% more than shoppers in other channels, including basic e-commerce and physical retail stores. Since 2018, Obsess has also partnered with beauty brands like Charlotte Tilbury and Prada, Ralph Lauren and Maybelline to create virtual stores.

Costs for opening a virtual store vary, but are significantly smaller than launching a physical footprint or a similar activation in a large multiplayer games. “The cost depends on the number of capabilities you [want to include] and the number of markets you’re launching in. But it’s [comparatively affordable], as we’re essentially reusing the core of our software as a Saas for all these experiences,” said Singh.

For Coach, the experience is just a starting point; it plans to host more virtual stores in the future. Most partnerships with Obsess are at least a year and include multiple store launches, according to the company.

“As digital worlds continue to be an important place for communities to interact, the virtual store provides several touchpoints for community interactions, whether with store associates, influencers, or their circle of friends and family within a virtual environment,” said Klein.

Coach is not the only brand relying on virtual stores to spice up online holiday shopping. On November 9, Crocs also opened a virtual holiday store as its second activation with Obsess. The brand debuted its first, more limited store in Jun, in step with the launch of a collaboration with singer Saweetie. According to Singh, Crocs’ last virtual store beat all the industry benchmarks for social media engagement, which encouraged the brand to build a more extensive experience for the holiday season.

The five-room experience on Crocs’ DTC e-commerce site took three months to build. It includes a quiz, a game with exclusive prizes, and four rooms that convey the tactile nature and holiday theme of the brand’s faux-fur-lined Crocs. According to its retail partners, Crocs focuses on personalization in the digital space as an extension of its popular charms, called Jibitz, enabling customers to personalize their shoes. Both concepts bring customers into the brand world. Crocs released an NFT in January, and launched on virtual platforms Zepeto and Roblox in September as part of its “Croctober” activation.

“As a brand, we’re focused on transcending from products into emotion through more immersive and digital-first experiences,” said Feliz Papich, vp of digital product management and consumer experience at Crocs. “Evolving beyond traditional channels opens the door to an increasingly mutual, interactive relationship with consumers.”

While most brands are partnering with studios like Obsess, others are going it alone. Japanese apparel brand Uniqlo has started trialing a virtual store concept of its Tokyo store locally, with possible plans to roll out the virtual store to Europe and the U.S next year. Michael Zakrzewski, director of communications and public relations at Uniqlo, said that the store was launched to kick off the brand’s fall-winter season, as part of the brand’s commitment to the online-to-offline experience.

“It allowed customers who could not join our special LifeWear exhibition in-person the chance to view it from home. Using a 360-degree camera, customers could tour and shop from the store as if they were physically there.”