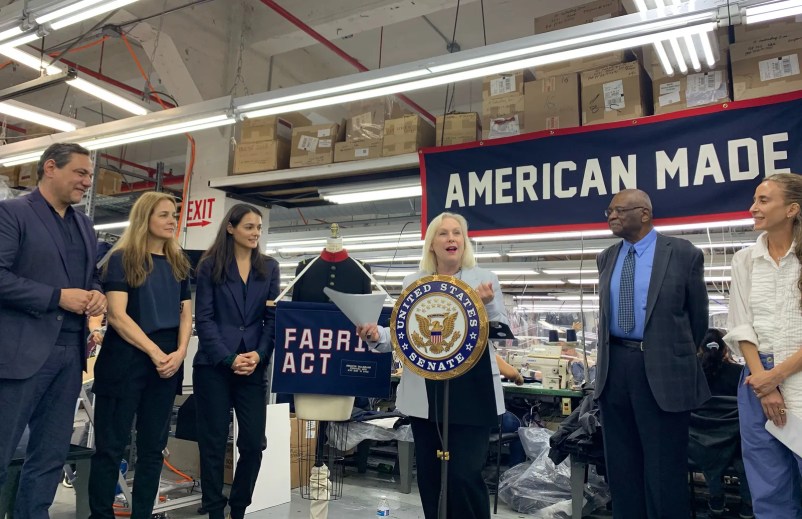 What progress on the Fabric Act means for fashion

The Fabric Act went to the House of Representatives on Monday, opening up a way to protect garment workers and provide a route to nearshoring. The bill’s implementation at the federal level could herald landmark change for U.S. fashion.

After passing in the U.S. Senate in May, the bill outlines hourly pay protection for 100,000 workers nationwide while eliminating piece-rate pay until the minimum wage is met. It also proposes that fashion brands and retailers should be jointly liable for workplace violations and supply chains.

Legislation is coming fast for the fashion industry, with The Fashion Act and E.U. legislation affecting global supply chains. The Fabric Act also included a $40 million Domestic Garment Manufacturing Support Program and introduced a 30% reshoring tax credit for garment manufacturers who bring their operations back to the U.S. Fashion brands like Mara Hoffman and sustainable apparel brand Another Tomorrow have supported the Fabric Act, helping to develop it along with the congresswoman.

In a statement on Monday, New York congresswoman Carolyn B. Maloney said, “Cementing the United States as the global leader in manufacturing apparel responsibly by putting forth worker safeguards, increased oversight and transparency of the industry and creating incentives to bring jobs back to the U.S. will have positive impacts on our nation’s economy and commitment to the American worker for generations to come,” she said.

“It feels like a watershed moment, because poor labor standards and human rights violations of this industry have been front page news for over a century, and yet, there is still relatively little legislative action, including in this country. ‘Made in the USA’ has such a strong positive connotation that it doesn’t often match what’s happening behind the scenes,” said Another Tomorrow CEO Vanessa Borboni Hallik.

This bill comes off the back of the SB-62 bill, which Another Tomorrow supported in California. That bill was crucially important in outlawing piece-rate labor as well as creating higher standards of brand accountability.

“SB-62 gave us a template to see this bill go national. It’s not unusual to see California take that leadership. Senator [Kristin] Gillibrand’s office recognizes that ethics and accountability are actually a new baseline standard, if you want to be a leader in the future. The Fabric Act will hopefully position the United States back at the forefront of positive labor rights, while creating a framework for nearshoring, as well. This is sorely needed in the U.S., given the hollowing out of the industry here over the last 30 years,” said Barboni Hallik. As large-scale textile mills opened up in Asia and costs went down for manufacturing, many U.S. retailers have moved their production abroad.

Barboni Hallik hopes that the Fabric Act is a crucial next step, taking garment worker wage protection and brand accountability for supply chains to a federal level. “The piece-rate labor aspect is crucial. Given the level of inflation in this country at the moment, we need to raise the floor in ensuring that garment workers are at least earning the minimum wage in their roles,” she said. “Beyond that, the areas that focus on brand accountability are extremely important, because this industry relies so much on subcontracting. It’s too easy to say, ‘We’ve got contractual agreements in place,’ but it’s then up to the garment companies to implement standards.”

Piece-rate pay is a common payment structure for clothing manufacturing, with workers paid per item they produce. As the system typically works as an incentive structure on top of low pay, it often creates uncertainty and concern for workers.

In June, Glossy called legislation essential to driving change within manufacturing. “Policy is incredibly effective,” said Kristy Caylor, founder of the circular apparel brand For Days, speaking at the Glossy Fashion & Luxury Summit. “Seeing the E.U. doing what they’re doing is great. It’s a signal and a roadmap for how we should do things. But the U.S. has so far only seen movement on the coasts. Policy change is slow here. If we can build consumer traction and show that dollars are being spent on circular and sustainable fashion, that’s the most effective thing outside of policy that we can do to push this movement.”

Currently, Another Tomorrow is relying on E.U. factories to ensure responsible manufacturing. It produces almost entirely in Portugal and other European areas where legislative frameworks and collective labor agreements exist, and where there is a culture of support for that legislation.

“We’re producing almost nothing in the U.S., even though we do some upcycled denim out of Los Angeles. This is one of the reasons why we feel so strongly about this bill,” said Barboni Hallik. “As a new brand in our product category, we found that implementing living wages was exceptionally difficult to implement in the United States at scale. This was a big surprise to us and was a result of poor legislative support for living wages. We found it very difficult to comprehensively guarantee living wage pay when manufacturing in the states.”

As the bill provides a reshoring tax credit, it creates that economic incentive, according to Barboni Hallik. “It’s seeking to establish a new best-in-class garment manufacturing sector that speaks to baseline labor practices that should be there across the board,” she said. “It’s creating better enabling conditions at the start on the ethics and accountability side, on top of the economic incentive.”

We’re already seeing manufacturers planning for the future and moving to American manufacturing. Manufacturing company FutureStitch opened its first factory in California earlier in July and is hoping to open a larger facility in Dallas, Texas in 2024, with more brands coming on board.