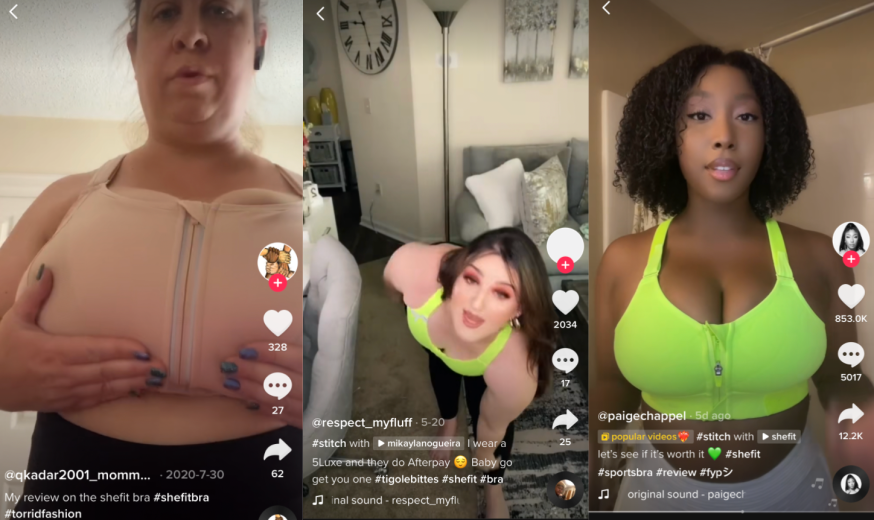 The Shefit sports bra is taking over TikTok

In a recently posted TikTok, Mikayla Nogueira, who has 5.7 million followers and is typically known for glam makeup looks, jumps up and down in a sports bra. Not just any sports bra, though — the Shefit Ultimate Sports Bra. It’s “on my FYP every single day,” Nogueira says in the clip.

The bra in question is $69 and features special zip, cinch and lift technology, which, according to the brand’s website allows the wearer to “personalize your fit and control your level of support.”

Mikayla demos the bra, exclaiming in the Boston accent she’s now known for, “I finally said fuck this, I’m just gonna buy it. Never in my life would I spend $70 on a sports bra, but the way they make them titties not move, I had to,” she said before demonstrating a bend-and-snap in the bra. The video has 4.3 million likes and over 21,000 comments.

TikTok user Janette Ok (aka Inmyseams,1.6 million followers) bought the bra in the same trendy lime green hue as Nogueira. “I tell you, I didn’t just walk, but I ran to that website to try and review this for you.” She tries it on, jumps up and down, and says, “Girls are not going anywhere.” The video has over half a million likes.

It’s hard to imagine a trend like this taking off on Instagram, or among millennials. It is, after all, Gen Z that has paved the way for a more no-holds-barred approach to social media, one in which jumping up and down in a sports bra (at any size) is not only acceptable but applauded. TikTokers like Remi Bader have normalized calling out when things don’t fit.

The Shefit bra fits cup sizes from A-I, making it one of the more inclusive options on the market.

User Kylie Shariff (@equestrianstrong on Tiktok) filmed a video addressing the fact that she’s often asked about the most supportive bras for horseback riding. She notes that she likes the Shefit, but layers it over another sports bra, “but that is because I am a 44M,” she said. The hashtags on her video include #plussizeequestrian, #equestrianstrong, #bekind and #supportivebra. In her TikTok on the style, user @qkadar2001_mommyof2 says that she made the video because, “I always see the girls with small boobs doing it, never a heavy chested girl.” She used the hashtag #torridfashion. (In the video, she is wearing leggings from Torrid, and the hashtag would, of course, show the video to other users interested in plus-size fashion.)

In video after video, a diverse array of TikTokers demonstrate the brand’s signature three-step process and then jump up and down in the bra. User @paigechappel said she bought it to see if it works for “everybody, on every chest.” In addition to the “Zip. Cinch. Lift” technology, the size inclusivity is part of why the brand is resonating.

It’s Shefit founder Sara Moylan’s intention to prioritize product function over fashion and to remain accessible to women of any size. “I don’t care if she’s a [size] 0 or 24. [With our products,] she’s gonna pay the same price as anybody else, and her product is going to look just like the other sizes,” Moylan said. “I work out six times a week, and it is not easy. It is discipline. When somebody goes to work out, they want to feel like the shit — confident, sexy, strong, in control. They are the ones who pick how far they go.” Other bras have been holding women back, Moylan said.

Many users, including Nogueira, stitched the video with another one by the brand, which is rare — organic brand content taking off is not common on TikTok. And yet, in this case, the video in question has 6.8 million views. It’s captioned: “When your boobs finally feel what no bounce feels like with Zip. Cinch. Lift.” The uniquely visual element (particularly of the lifting step, where the wearer pulls back the straps and literally lifts the breasts) is undoubtedly part of the bra’s success on the platform — and with major influencers jumping up and down in their sports bras, the bra is likely selling more than ever. When Glossy reached out to the brand, the website warned that inquiry volumes are higher than usual and to expect a delayed response.

Shefit first received attention when Sara Moylan pitched her idea for the brand on “Shark Tank” in 2016. Now, Tiktok has exposed the brand to a wider (and younger) audience. It was Moylan’s four daughters who encouraged her to do more on the platform. Shefit has not put any money behind its TikToks, said Moylan.

“The recent virality on TikTok has driven high-quality site visits from that channel to Shefit.com, with [number of visits] in the six figures over the last few weeks, which converted at a surprising rate,” said CMO Erik Lautier.