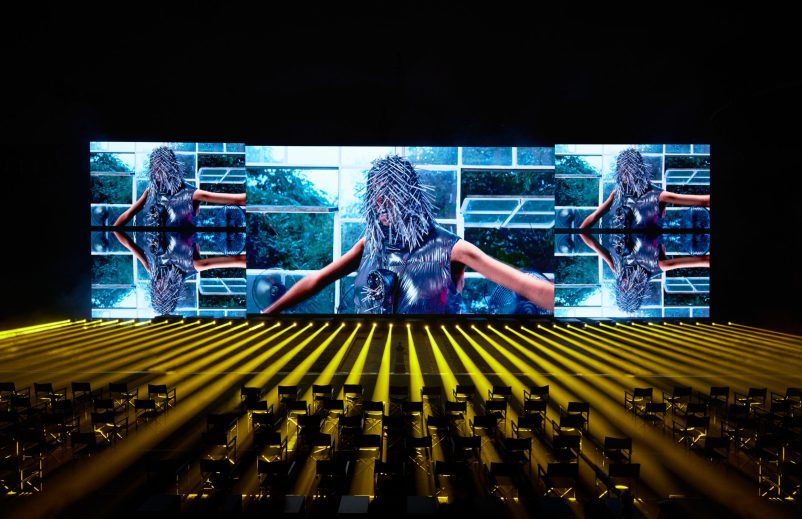 The Milan shows have not been physical in over 18 months, since the pandemic hit Italy and brought the fashion world from the shows into self-isolation. The idea of rebirth in various forms had been discussed since the format of the shows went digital: Should the fashion week schedule change? How should designers work around the perpetual demand for novelty? For the Italian houses including Gucci, Versace and Marni, the answers came in different forms.

For Gucci, this meant launching Gucci Vault, a continuation of the collaboration between independent designers and the brand launched with GucciFest 2020, the festival aimed at replacing their seasonal shows. The Vault launched with a physical exhibition in Milan featuring vintage styles among neon walls and an old-school computer on which the Vault website was displayed. The Gucci Vault is the next of Alessandro’s cross-brand “contaminations,” started with Balenciaga and the North Face. Similar to the retro Ganni website from 2020 designed by the Moon Agency, the Vault encompasses gamification to fuel ample discovery. Following the festival’s success in 2020, the brand posted a 25% increase in revenue for the first quarter of 2021, showing a strong comeback after a tumultuous year.

The Gucci Vault expands on the Gucci universe in an online space and gives the stage to restored vintage pieces and exclusive items from almost all of the 15 designers originally featured in the festival. (Mowalola and Gareth Wrighton are not included.) The lineup consists of Ahluwalia, Shanel Campbell, Stefan Cooke, Cormio, Charles de Vilmorin, JordanLuca, Yueqi Qi, Rave Review, Gui Rosa, Bianca Saunders, CFDA/Vogue Fashion Fund finalist Collina Strada, Boramy Viguier and LVMH prize finalist Rui Zhou. In a statement, Gucci said the Vault is “speaking to the belief that past, present and future can co-exist through the power of the imagination.” It will focus on integrating more designers in the collaborative space in the future, and ensure a constant supply of sourced vintage Gucci and work from its protégés. Its next show is set for Nov. 2 in Los Angeles, coinciding with the 10th LACMA Art + Film Gala, which Gucci is sponsoring.

This support for young fashion insiders by the main fashion conglomerates also extends to LVMH, which recently announced it will be adding 25,000 people globally under the age of 30 to its workforce under the #CrafttheFuture initiative. The program is meant to account for the growing demand for artisans and luxury goods.

The Gucci move online was echoed in the digital, mirrored shows across Milan Fashion Week. That included Mondogenius, the hybrid presentation from Moncler that was staged across Milan, Shanghai, Tokyo, Seoul and New York. Meanwhile, Prada held an IRL show in Milan with screen “portals” to Shanghai, where a similar show was held, complete with models with digitally-enhanced hair. From a business perspective, these international ventures show the importance of China on the fashion show schedule. The country rebounded in luxury fashion sales after a comparably quick recovery from the pandemic. While the global luxury market shrank by 23% in 2020, according to Bain and Company, in mainland China, the market share increased from about 11% to 20%. The Moncler Genius collaborations with designers ​​including Valentino’s Pierpaolo Piccioli, Craig Green and Simone Rocha have been incredibly successful on social media, bringing media value to the heritage ski brand.

The Mondogenius presentation brought art, music, sport and film into Moncler’s fashion world with a site that let the user jump from city to city and various presentations, online. In a statement, chairman and CEO Remo Ruffini said, “​​Today is not only about products, but is even more about our communities and the culture we want to shape together. The world is changing. People do not want the same things as before; they demand and expect more from brands. Today, we must find new ways to connect and engage, becoming pioneers of new messages.” The development of online spaces clearly indicates a shift toward brand metaverses, or digital spaces where brands can build on different types of content to bring in fans who are used to online communities.

From ’90s supermodels to TikTok stars: Fendace, the exchange between Fendi and Versace

In a move akin to streetwear giant collaborations like Supreme x Rimowa, Italian houses Versace and Fendi exchanged creative directors for one show, with Kim Jones and Silvia Venturini-Fendi designing for Versace, and Donatella Versace creating for Fendi. The result: an archival look into both brands through their “Fendace” union, which was sprinkled with logomania. It was described in the press release as being “about the need for sincerity in fashion today, rather than strategy.” Versace also had its main show during the week, with singer Dua Lipa opening the stage.

From chainmail dresses to the union of the Fendi monogram with Versace’s famous Greek key, the collection explored the maximalism that reigned in both brands’ collections in the ’90s. The nod to the archives was also seen through the casting choices, which brought together the biggest modeling stars of then and now. Kristen McMenamy opened the show, and Naomi Campbell closed it in a pink chainmail dress. Kate Moss and Amber Valletta also made an appearance as a duo midway. The show was also one of the only ones in Milan to incorporate size inclusivity, with Paloma Elsesser and Precious Lee joining the lineup, along with Karen Elson, Mariacarla Boscono and Shalom Harlow.

The Fendace show resonated with the younger audience and was particularly popular on TikTok under the #fendace hashtag (9.4 million views), with one of the platform’s biggest stars Addison Rae attending the show. The exchange shows a defining trend toward brands creating together. From Miuccia Prada and Raf Simons to Gucci and Balenciaga, the brands are taking care to not label these as “collaborations,” but rather, partnerships, swaps and exchanges — like a value exchange, perhaps.

Marni: The emotional release of MFW

The Marni show read as a culmination of events from the last year and included emotional pandemic sentiments, with singer Zsela singing “Guide You Home” alongside a full chorus. Models in stripes moved across the amphitheater’s circular stage and among guests, who were also dressed in the collection. The show was a highlight of the Milan Fashion Week lineup, leveraging an arts school performance to speak to the diversity and inclusivity that had become a prominent talking point throughout the pandemic. Dev Hynes was responsible for the music and poet Mykki Blanco did a spoken word performance, encapsulating the multidisciplinary nature of the most successful shows during the week.