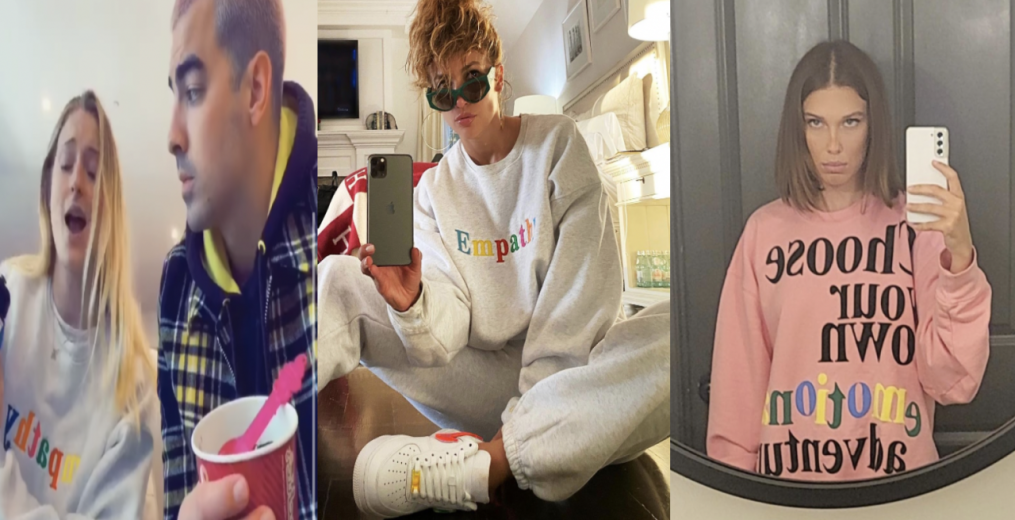 Meet the brand behind the ‘Empathy’ sweatshirt every celeb is wearing

In 2016, Sam Abrahart, CEO and founder of The Mayfair Group, was struggling with depression and social media was not helping. It felt like, “everyone was on a yacht, living their best life in this alternate reality.” Frankly, this is a sentiment anyone who’s ever spent time on Instagram can relate to.

It felt, she told Glossy, like “nobody was having important conversations.” The internet was lacking a “digital safe space where people could go for positive messaging, and empowering content…like, why can’t we use the internet for good, and create a place where people feel valued and inspired, instead of feeling shitty about their life?”

In 2017, she launched The Mayfair Group — a company that, at its inception, was about 80% service-based (it provided public relations and social media services) and 20% content (an enterprise that was not designed to be profitable). To Abrahart, The Mayfair Group’s own brand served two key purposes: the first, to offer a moment of positivity when people are scrolling on their phones; the second, to show clients the company’s ability to build and grow a community — something it turned out to be quite good at. At the start of 2019, the brand had about 5,000 followers, but by the end of the year, it grew to 300,000. Now, in 2021, the brand has 462,000 followers.

Given the fact that a polished “highlight reel” was the norm, Abrahart was surprised by the response and underestimated the demand for this type of content. A post that reads “Asking for help is an accomplishment” in magnetic letters has 5,729 likes, while a cake with “Sad is ok” written in frosting has 34,118. The color-coded feed is filled with ultra relatable quasi-mantras like these. Given the brand’s hike in popularity during a global pandemic, it’s easy to see why these types of posts especially resonated.

Now, the norms are shifting, something Abrahart (30, a millennial) credits Gen Z for. It was her sister, in fact, who is six years younger, who initially encouraged her to go to therapy. “Gen Z embraces vulnerability and authenticity. They want the mask off, they want unfiltered, like ‘I’m gonna take a photo in the bathroom with my zits and just be myself and own my feelings and not be ashamed of them.’” It’s a contrast, she said, to millennials who would “pretend to be happy.” Abrahart pointed to people like Billie Eilish (who she calls Gen Z’s “queen”) and Emma Chamberlain for “doing it differently and embracing vulnerability.”

As the brand’s content increased in popularity, it received daily comments that said “put this on a sweatshirt.” So, eventually, Abrahart and COO Devonne Bedalt did just that, launching a Shopify site on March 8, 2020. “We launched positive messaging loungewear…right before the start of Covid…unbeknownst to us,” she said. One of the first products (which is still a bestseller) was the brand’s “Empathy Always” sweatshirt, a simple blue crewneck with the word “Empathy” in rainbow letters. By August, Jennifer Lopez posted a selfie in the sweat set, her caption reading simply “Empathy: The ability to understand and share the feelings of another. ✨❤️✨Happy Sunday … 🌼”

Abrahart’s phone blew up with texts asking if they’d paid her to post. The answer: “No, she willingly literally put it on and took a photo,” she said, though Lopez had been gifted the set. “We really believe in gifting a huge variety of people.” Now, the list of celebrity fans is long. Justin Bieber, for example, regularly wears the brand’s “Just Be Kind” set and its “Forever Evolving” hat. Millie Bobbie Brown posted a selfie in the “Emotional Adventure” sweatshirt. “Celebrities, like normal people, believe in positive messaging and want to help spread these messages. We haven’t paid any of these celebrities who have worn our products,” Abrahart said.

For its most recent collection, the brand took talking about mental health to a new level, and also hosted its first IRL pop-up in Los Angeles in early May. The merch from this “campaign” (as the brand calls its drops) reads in bold, vintage-shopping bag-esque text: “Thank You For Asking About My Mental Health,”

“We created installations — Mayfair IRL — to bring our grid posts to life. We had a bunch of installs, like phones, that were all the things you need to ‘hang up on’ or ‘say hello to.’” These physical manifestations of the brand are something they want to continue to focus on, she said. “It was crazy, just because nobody’s been out of the house in a year and a half…and so, people were like crying people. It was just a really emotional thing, not only to be out of the house but then to be in a space where you’re embracing vulnerability.”