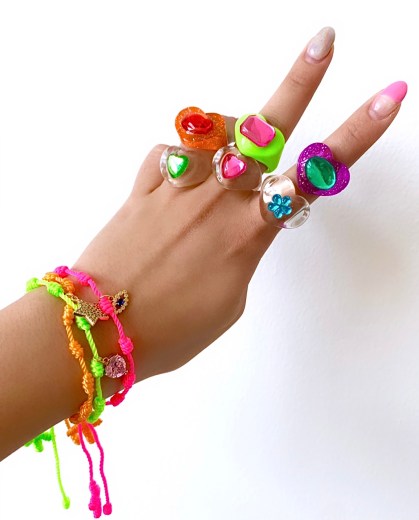 The same week that Clare Ngai left her job as a talent manager to devote herself full-time to her fledgling jewelry brand, Kylie Jenner wore her earrings.

“I’m kind of a spiritual person. I just felt like all the stars aligned,” Ngai said. That was in March. Ngai had been plugging away building BonBonWhims since August of 2020. Since, the brand’s colorful, Y2K-inspired baubles have been popping up on the wrists, ears and necks of celebrities and tastemakers at a steady clip. And, all things considered, it didn’t take long for one of the most influential stars in the world, Jenner, to bring attention to the brand. Ngai credits the brand’s growth, in part, to the expertise she honed in her experience working with influencers and prior to that, working on digital strategy for CoverGirl.

Ngai said she’d always loved making jewelry and had even attempted to launch a brand before. But the unique circumstances of the pandemic made it possible for her to actually do it. She not only had more time, but she also felt a strong desire to create a career in which she was able to give back, be creative and, overall, feel more fulfilled. As a result, she built the brand to have a give-back component, and launching during the summer, shortly after the peak of Black Lives Matter protests, provided an opportunity to do so.

“I was at home literally booking paid deals for influencers. It felt so frivolous…when there were much bigger things happening in the world,” Ngai said. “Being a person of color, that really just made me feel like, ‘OK, maybe I can also use my brand as a platform to speak up and raise funds for organizations that benefit BLM or BIPOC organizations.’”

At that point, the brand didn’t even have a website; Ngai was just making jewelry sales via DM. People would reach out on Instagram, based on Ngai’s posts, asking her to create custom charm necklaces. She made it happen, sending photos of each individual charm at a time and letting customers choose what they wanted. On November 11 (Singles’ Day), she launched a website and donated part of her first-day proceeds to Send Chinatown Love, a grassroots organization supporting businesses and people in Chinatown. In honor of Black History Month in February, the brand donated 100% of proceeds from its special edition Lucky Charm Ring in Green & Red Heart to GirlTrek, a public health nonprofit for African American women and girls.

The brand has not done paid ads, other than tests requiring minimal investment. Its Instagram page is quickly approaching 24,000 followers. Ngai said Instagram accounts that track and tag the brands Kylie wears led to a spike in followers and sales.

BonBonWhims’ now ubiquitous rings were introduced in January, and their accessible price point (they range from $38-$88) helped further expand the brand’s reach. Ngai said much of her audience is made up of millennials, but some Gen Zers are getting introduced to the brand by their mom. (Ngai said a feature in the April Town & Country likely lent the brand some credibility with the older demographic.) While stars like Jenner give the brand a boost, Ngai said that micro-influencers, and even normal people with loyal followings have also driven sales. The playful, colorful and whimsical baubles have made appearances on TikTok: User @socosophsoco, a micro-influencer with nearly 29,000 followers on TikTok, posted a visit to Ngai’s West Village studio in April. The post got 20,000 likes and, Ngai said, drove countless DMs.

When Jenner’s stylist, Jill Jacobs’ team reached out, “Of course, I responded immediately and sent a whole collection of what I had at the time,” Ngai said. “I had no expectations. It’s Kylie. She has so many options to choose from, from big brands to small brands.” A month passed before Jenner posted an image wearing the BonBonWhims PopDrop Earrings (enamel-covered earrings that look like soda can tabs). “So I just had a heart attack, and I was like, ‘Oh my god this is amazing,’” Ngai said of the game-changing moment. Ngai saw a gradual spike in sales for the style in the weeks after Jenner’s post.

Ngai said that timing has been a crucial factor in the brand’s success. “People really want something positive and happy — just, like, good vibes during a global pandemic,” she said. She called BonBonWhims — the name is a mashup of “bonbon,” French for candy, and “whims,” short for whimsical — a welcome distraction: “[People want] something so colorful and bright that kind of takes their mind off of dealing with Covid.”

She added that there’s also been a huge comeback of the ’90s-’00s aesthetic that has served the brand well. “Coupled with my background in this industry and just understanding of the digital world and how to leverage it, it’s like this perfect storm of everything coming together.”

Just a few hours after Glossy spoke with Ngai for this story, Ariana Grande wore a BonBonWhims ring. Ngai is friends with the two jewelers who made Grande’s engagement ring, and they passed along the products from the company to her fiancé. Grande fan accounts were DM’ing Ngai even before she had a chance to post about it. Grande posted a photo showing the ring to both her Stories and feed, instantly spurring yet another flurry of press coverage for this on-the-rise brand.