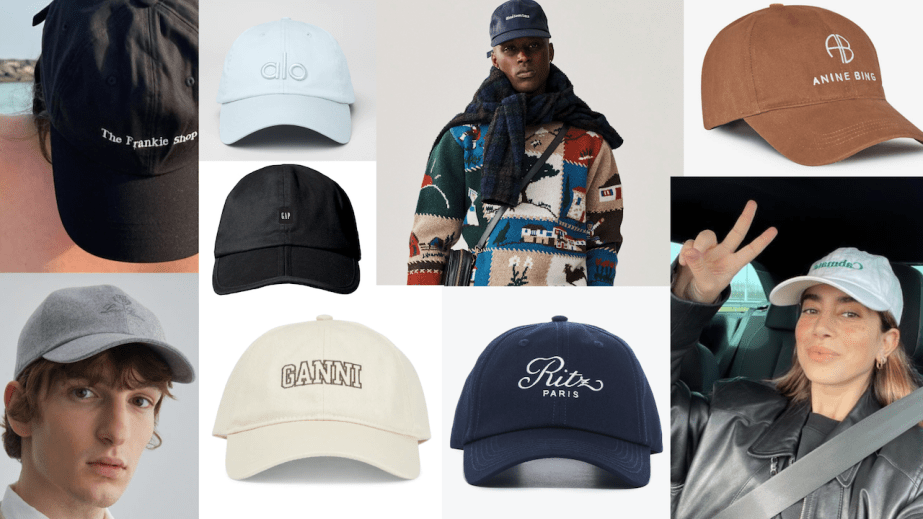 This week, a look at how fashion is using trendy merch to fuel brand fandom.

Branded baseball caps are gaining traction, providing an opportunity for consumers to tag themselves IRL.

Call it the TikTok effect. As various hashtagged aesthetics catch on across social media, consumers are turning to fashion-branded styles to self-identify, or voluntarily choose a lane. At the same time, popular and aspirational brands are leaning into the sales and marketing opportunity ball caps provide; they’re answering demand by turning out logo-topped styles that fit a vibe of the moment while putting access to their worlds within reach. Baseball caps have become a common go-to, and brands are now building on the product category based on the results it’s driven.

Once you pick up on the trend, it’s hard to miss it. Ball caps featuring a small, embroidered name of a brand have increasingly been flooding the Instagrams of fashion fans. Versions by Alo Yoga, The Frankie Shop and Anine Bing have been big among style influencers. Meanwhile, the fall lookbooks and product releases of Aime Leon Dore and Loro Piana, respectively, point to industry faith in the trend’s longevity — by today’s standards, anyway.

It’s not a new idea. “Balenciaga”-labeled hats have been worn by celebrities including Kylie Jenner and Rihanna since 2017. And, though they were non- or inconspicuously branded, “Succession” characters’ $400-$600 Loro Piana accessories stoked the desire for a status cap back in 2021.

But there’s no denying the stickiness of the concept. Placing eighth on fashion search engine Lyst’s “hottest” men’s products for the second quarter of 2022 was Polo Ralph Lauren’s classic cotton chino ball cap featuring its signature galloping pony icon in the center of its front panels. Lyst’s rankings are based on shoppers’ social and online shopping behavior.

And fashion brands that recently introduced baseball caps have plans to roll out more. For its part, Frame is playing into the trend through hotel collaborations. In 2021, it released styles including caps branded with “The Carlyle” or “Ritz Paris,” as well as a small “Frame” on a back panel. And on Thursday, it will launch a second Ritz Paris collection inclusive of a Ritz-branded cap available in three colors.

According to Frame co-founder and chief creative officer Erik Torstensson, the buzz surrounding the original Ritz collection was among the greatest Frame’s seen for a collab. That was fueled by stylish celebrity fans including Hailey Bieber and Naomi Campbell, who were photographed wearing the pieces “in elevated ways.” Items from the collection are now selling for five- to 10-times their retail value on resale sites.

“Merch continues to have a moment,” Torstensson said. “The [first] Ritz Paris collection resonated so well because it’s one of the most famous heritage brands in the world. And our collaboration democratized access – everyone can buy into a baseball cap.”

Outside of going for a celebrity or aspirational look, consumers are also scooping up caps to get the gender-neutral, utilitarian look being hyped by the fashion set. When worn with a white tank top, a pair of oversized pants and rugged shoes, a ball cap completes an influencer- and designer-approved outfit of the day.

Like Frame, Anine Bing debuted branded ball caps in 2021. The company’s chief operating officer, Olivia Gentin, said the inspiration was “Princess Diana’s off-duty streetwear style,” a common touchpoint for the brand — and many others today — thanks to its timelessness and ease. In addition, introducing “a strong style” offering both brand “visibility” and “a piece of the brand at an opening price point” was a goal. In the 18 months since, the cap has continued to sell out. It’s become part of Anine Bing’s core Classics Collection, and the brand releases new colorways every season. Anine Bing marketing shows the cap worn with everything from activewear to suiting styles.

“We continue to innovate and build off of our top-selling styles, season over season,” Gentin said. As such, the company is now eying adjacent styles including branded visitors and hair accessories.

Likewise, sales of Alo Yoga’s branded caps have taken off. Abby Gordon, the company’s vp of design and merchandising, said the caps’ introduction was a response to community demand for more ways to connect with the brand. But both Alo loyalists and first-time shoppers, as well as both men and women, are buying them up, largely motivated by the styles’ “accessibility and versatility,” she said. She added that the caps have sold out every quarter, and the collection’s expanded to six additional colorways since launch. Caps now have permanent placement in Alo’s product assortment.

Branded caps are set to stick around through at least spring 2023, if the new collection of 5-year-old M65 Studio is any indication. Set to premiere at a New York Fashion Week runway show on September 9, the brand’s spring line will include multiple logo ball caps, designer Anthony Hendrickson confirmed to Glossy. The styles will round out Hendrickson’s overall vision of an “effortless,” “Y2K” look, inspired by “what people are wearing on the street.”

And according to data via distributor Research and Markets, the global baseball cap market will continue to grow. It was projected to see a compound annual growth rate of 6.6% starting in 2020, to reach $24.2 billion by 2026.

But a strong brand must come before merch, for any company aiming to find success in the space.

Amsterdam-based Bart Kooi, who also works as a freelance marketer at Calvin Klein, has been building a brand-first fashion business since May 2020. So far, it only sells branded caps.

At the height of the pandemic, Kooi launched the Instagram account Cabmate, meant to be a digital mood board-slash-creative outlet. He chose its “catchy, cosmopolitan” name after seeing the word in a newspaper story about Jon Weiser, founder of iconic NYC retailer Charivari. And he created a logo for it using a font that he deemed modern, yet familiar.

When a friend encouraged him to “do something more” with the account to allow followers to “get the vibe” depicted in the posts, Kooi decided to launch ball caps based on their one-size-fits-all, unisex simplicity, he said. Through a Shopify site set up to sell in 27 countries, he’s since established a strong side hustle of selling the caps. Each of the eight available styles features “Cabmate” in contrasting embroidery and sells for around $45. France, Germany, the U.K. and the Netherlands are Cabmate’s top sales markets, and all of the company’s growth to date has been organic, Kooi said. He declined to share sales figures.

“People wear our caps because they want to be part of this community — to show that they’re part of the inner circle or ‘in the know,’” he said. “The caps are good quality, but they’re just basic caps. They buy them for the brand.”

Of course, much of what’s behind logo caps’ new timeliness is also working to give once-tired totes a boost, as recently and widely reported. As such, the branded baseball cap is not “the new branded tote,” so to speak. Instead, according to Gentin, “There’s a need for both in [shoppers’] wardrobes. They’re both here to stay.”

‘Our business is different’: Why fashion rental has withstood the pressures of inflation

In the face of inflation, URBN embraces a diversified audience strategy