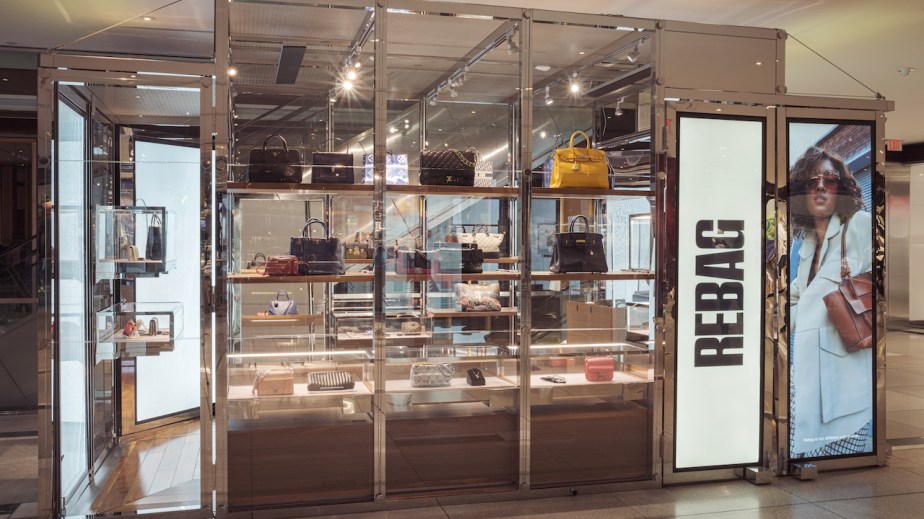 Fashion Briefing: What’s next for the resale and rental models

Fashion’s buzzy resale and rental markets are often mentioned in the same breath, as both provide a more affordable, sustainable alternative to traditional fashion consumption. But, since the start of the pandemic, they’ve been forced in very different directions: Resale has flourished, attracting new brand partnerships and major investment dollars, while rental has suffered.

Below, a leader from each market discusses what challenges and advantages they’ve had this year, as well as what strategies they’re updating to ensure a successful 2021.

On Thursday, luxury resale company Rebag opened its first Rebag Bar, its new micro-store concept catering to sellers: They can get items authenticated on the spot and get paid for them within an hour. The 180-square-foot kiosk, located in New York’s Columbus Circle shopping center on the Upper West Side, also sells a small selection of 50 items. Overall, the company has 20,000 bags and accessories in its inventory.

In February 2019, when announcing a $25 million Series C investment round, Rebag founder and CEO Charles Gorra said the company planned to open 30 stores in the “medium term” — they’d be a mix of standalone stores and luxury mall locations. This year, however, it closed three of its nine existing stores, all of which Gorra said are “at least five-times” the size of the Bar format. This included the retailer’s Beverly Hills and Melrose Place locations.

“With the current evolution of retail, we think this [format] is a nicer fit; it’s our Retail 2.0,’” said Gorra, of Rebag Bar. “The world is largely more online, and this acts as a digital gateway. You don’t need 2,000 square feet to sell an item.”

What’s more, the new Bar doesn’t rely on tourists. That’s unlike Rebag’s other locations, for example, in NYC’s SoHo neighborhood and World Trade Center mall.  “Everyone is operating in a reduced geographical zone, so it’s nice to be local — in a residential area and within walking distance for a lot of sellers. We’d rather have 2-4 convenient Rebag Bars than one gigantic store requiring a longer journey.”

Starting with the Columbus Circle location, all in-store associates will also provide chat-based support to online shoppers via the Intercom app; they’ll receive a notification if a shopper’s inquiry aligns with their expertise.

Of course, a resale company launching small-scale authentication stations is nothing new. The strategy has been adopted by StockX, GOAT and Fashionphile. Most have been consolidated to large cities.

But for future Bar locations, Gorra is eying affluent neighborhoods — especially those in the suburbs, considering the recent sprawl to city outskirts. Premium malls, brand and department stores via partnerships, and resort towns like Martha’s Vineyard and the Hamptons are also being considered. Gorra declined to share the number of Bars he plans to open.

Gorra said that, early in the pandemic, it was “reasonably difficult” to access product from sellers, as many weren’t comfortable going to the post office or even having someone pick up a package at their door. But Rebag tackled “2-3 years of expansion in nine months” that enabled its 50% top-line growth this year, he said.

In May, a month after announcing a Series D funding round of $15 million, it expanded beyond the handbag category to accessories, including scarves, belts and sunglasses. Then in November, it expanded to watches and fine jewelry. To date, Regag has raised $68 million.

“If you sell an Hermes Birkin, you also have Cartier earrings, you have a Rolex, and you have Chanel brooches,” said Gorra. “It’s all the same customer. Now, we’re operationally structured to process more of their closet.”

According to Gorra, the new categories fueled the 6-year-old company’s best Black Friday sales to date. Cartier and Rolex watches were hot sellers, and the company sold a $57,000 Patek Philippe watch.

The volume of users taking advantage of the brand’s on-site, proprietary Clair tool, which generates pricing of submitted styles, is up more than 300% since March.

In a 2020 Glossy Podcast interview pre-pandemic, Gorra pointed to the stat that nine out of 10 luxury customers have never sold items via resale. At the time, he said that was set to change as luxury shoppers expand their retail horizons — and they have, at an accelerated pace. In February, Bain reported that e-commerce accounted for just 12% of luxury sales, but since, luxury fashion houses have largely reported unprecedented lifts in online sales.

Gorra said Rebag is now winning over “destination shoppers that, by default, had to go online.” It’s also taking more wallet share of high-spend customers who have fewer entertainment options, with restaurants closed and travel paused. And, as a rule, he said, “When shoppers are price-sensitive, it’s always good for resale.”

He expects 2021 will be a “50-50 year,” that will start slow and catch up later. “It’s hard to make plans more than six months out, these days,” he said. “But right now, we are equipped for anything that can happen,”

Tentative plans include revisiting potential brand and department store partnerships that were on the table ahead of March. Think: The RealReal with Gucci or Fashionphile with Neiman Marcus.

In Gorra’s eyes, the forced pause of those discussions likely served Rebag well. “A lot of brands have used this time to progress in their thinking, their rationale,” he said. “So time is on our side.”

The future of rental: Nuuly president Dave Hayne’s 2021 game plan
Staying consistent, investing in technology and banking on a big return to socialization

The rental market transformed this year, with Le Tote filing for bankruptcy and Rent the Runway nixing its Unlimited subscription. But URBN’s Nuuly, which launched in July 2019, made a point to stay the course. According to Dave Hayne, CTO of URBN and president of Nuuly, the company’s solid foundation has been key to weathering the storm.

First and foremost, it has the backing of URBN, owner of Urban Outfitters and Anthropologie, among other established chains. “We weren’t a startup that had to navigate the waters of raising money,” said Hayne. Sharing operations has helped all of URBN’s brands get through the year. For example, Nuuly’s rental warehouses have been used by its sister brands for e-commerce fulfillment, and all collaborated on a holiday shipment plan with carriers. Widespread familiarity of URBN’s brands, many of which are available to rent exclusively through Nuuly, has also helped.

The company’s more casual assortment, compared to competitors that are better known for work- and eveningwear, has also served it well, as has its sustainable, digital-first positioning.

“We had a viable, sustainable concept from the outset,” said Hayne. “We benefited by not having to make any sweeping changes.” Since its start, the company has offered a simple subscription allowing members to rent 6 styles for $88 per month.

The company’s revenue curve, so to speak, has been pretty typical of apparel companies: Starting on March 14, business slowed significantly, with subscribers pausing their memberships. In late May, customers began to resubscribe, and that trend increased throughout the summer. September saw a spike in memberships, as the weather turned cool, but they’re now starting to “retrench” as news of increasing Covid-19 cases rolls out, said Hayne. He expects the lull to remain for the first few months of 2021, but he has high hopes for the year, starting in spring.

“We don’t think it’s going to just bounce back to normal; we’re more optimistic than that,” he said. “We’re all going to be so eager to be out and seeing friends and seeing shows and going to dinner. People are going to be thinking about what they’re wearing and about broadening their wardrobe, and that’s where we’re going to fit in.”

Nuuly projected hitting 50,000 subscribers in its first year and was on pace to do so at its subscriber peak in March. Now its subscriber count is about two-thirds of where it was pre-pandemic. A “large majority” of members that have fallen off have paused their membership, versus cancelling it. “There’s a ton of opportunity to get them to re-engage when the program makes sense for their lifestyle,” said Hayne. The purchase rate of rented styles has increased 50% since March.

Adjustments to the membership were made in early summer to eliminate a pain point, based on customer feedback: Members had to wait days for returned items to be processed by Nuuly before placing their next order. With the update, they can now order upon their returns’ first scan by UPS.

Other changes, which were pulled off “quickly and without affecting the program,” included pulling back on acquisition marketing, creative production and logistics costs. Marketing imagery and messaging temporarily turned to concepts like what to wear on Zoom or while staying home, said Hayne. As for product, the company introduced less newness overall, and leaned into comfort- and loungewear.

Going into 2021, Hayne said Nuuly will be “aggressively pursuing market and growth,” both via its in-house marketing team and third-party agencies. It will also continue to invest in technology. It’s been hiring engineers, data scientists and project managers for months, to ensure the program remains technologically sound. Moving forward, they’ll be charged with “driving [platform] enhancements and new experiences, and potentially new business extensions,” said Hayne.

“Once we see a consumer that’s back in action, we’re going to be in front of her,” said Hayne. “The rental concept is going to come out of this stronger than ever, and we’re going to see a quick return to quick growth. That’s the goal.”

On Tuesday, Natalie Massenet and Nick Brown’s Imaginary Ventures announced a second fund, of $160 million, invested in consumer brands in untapped markets. It follows their debut fund of $75 million in 2018, which included investments in tech-enabled consumer companies, including Glossier, Daily Harvest, Skims and Appear Hear.

“There couldn’t be a better time to launch and build new businesses, with radically shifting consumer tastes and expectations, a complete changing of the guard around marketing platforms, and instantaneous and direct reach to your desired customer base,” said Massenet, Imaginary Ventures’ managing partner. “Our role is to identify and support the best-in-class founders who are seizing this opportunity.”

Massenet also founded and was CEO of Net-a-Porter, while Brown’s background is in early-stage investing at 14W. In addition to capital, Imaginary Ventures provides its brand partners strategic and operational support.

“Today, companies don’t have to be all things to all people,” said Massenet. “The smartest founders are focusing on specific underserved demographics.”

Take Goodfair, which targets those who are passionate about sustainability. “Our mission is to change the way people think about consumerism and ultimately change how they shop by transitioning to a circular model,” said Topper Luciani, founder and CEO of Goodfair. “Right now, our focus is on clothing, but our mission is bigger than that.”

The year in fashion TikTok.

Juicy Couture is back.

On Running designed its new SoHo store to be worth the trip.