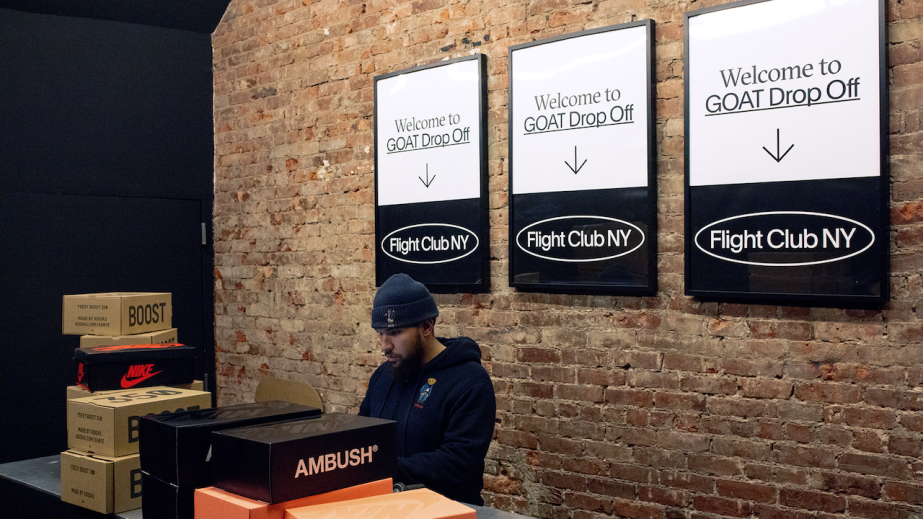 From drop-off points to sneaker storage: How resale companies are competing for sellers

Much of the discussion around fashion resale has focused on the buying element of it. But according to Matt Cohen, vp of business development and strategy at sneaker reseller GOAT, “We have two types of consumers, and they’re both incredibly important.”

For resellers, it’s just as important to be courting sellers as it is to bring in buyers. As the proliferation of stores like GOAT, Stadium Goods and other resellers has increased, along with major investments from LVMH and Farfetch, customers looking to sell clothes have a plethora of options for where to do so. This has created a race among resellers to see who can streamline the selling process to make it as quick and efficient as possible.

“Our marketing team is always looking at general customer acquisition for both buyers and sellers,” said Cohen. “For example, this past weekend, we had a promotion for sellers with the Jordan Bred 4 release. It’s an iconic sneaker, and we knew this would be a big release for sellers, so we offered them a $15 credit if they sold it through us on release day.”

For many sellers, the primary sticking point is in shipping off the product. Often, sellers are expected to provide their own box with a printed-out shipping label, and drop it off at a post office. In some cases, it can take up to a week between sending off the item and receiving their payment.

For that reason, GOAT just opened its first two permanent drop-off locations in New York and Los Angeles last week. Instead of waiting days for the shoes to be shipped off, received and authenticated, and then receiving payment, customers can get in, drop off their shoes and get paid on the same day.

Cohen also teased that GOAT is looking at investor Foot Locker’s 3,000 locations around the world for more potential drop-offs. If GOAT did take advantage of its partnership with Foot Locker, it would massively increase the amount of in-person options for sellers.

“We’ve also worked to create a power seller dashboard,” said Cohen. “That’s a seller dashboard that helps them manage large-scale inventory. When we launched our first pop-up drop-off location in Culver City in 2017, it was over the holiday, and there was a high volume of sales. Dealing with UPS can be a pain, and you have to find packaging for everything. If you’re selling a lot of shoes, it’s a huge hassle.”

Cohen said that around 60% of its sellers are one-time sellers, unlikely to reliably sell again, and 40% are frequent sellers. Of that 40%, nearly half is driven by a very small group of sellers, some of whom sell millions of shoes each year through GOAT and other platforms. For those power sellers, GOAT also rolled out Goat Storage, a service that would let sellers who intend to sell large volumes of shoes store them with GOAT to be sold at a later date (provided they were bought from GOAT in the first place).

Another reseller, StockX, has differentiated by establishing a catalog of available sneakers, by style, so that individual sellers do not need to create separate listings for their shoes or take photographs. They can instead just search the shoe they have and put out a price on it. StockX has also done several pop-up brick-and-mortar drop-offs, with each being larger than the last.

“After the first few smaller experimental pop-ups, we went big and got a spot on Broadway [in NYC’s SoHo neighborhood],” said Scott Newman, director of streetwear at StockX. “It was bananas, and from that point, we knew there was a need for [in-person drop-off]. Maybe it’s unfounded, but there is a distrust of shipping your items away, worrying they’ll get lost or something,”

For both of these resellers, the strategy for attracting sellers comes down to eliminating any friction and inconvenience from the selling process. With so many options available to them, sellers can afford to be picky about what they choose.

“What we’ve been trying to do is make it as easy as possible,” Newman said. “It’s also helpful for people who live nearby. They can just walk in, even if they weren’t planning on selling anything or don’t even know what StockX is. We can open up the app and show them right there who we are and how it works. It’s an opportunity to tell the story of StockX, too.”