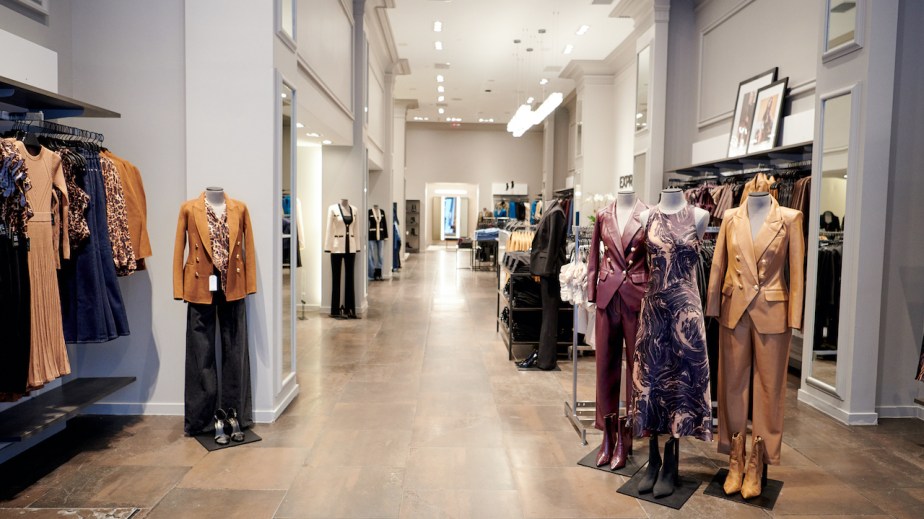 Fashion Briefing: The great store refresh is on

This week, a look at how brands are updating their stores for the new retail era. Scroll down to use Glossy+ Comments, giving the Glossy+ community the opportunity to join discussions around industry topics.

As shoppers enthusiastically return to stores, despite a looming recession, brands are updating their physical retail plays. Attracting more customers, as well as workers, and increasingly leveraging stores as marketing and logistics tools are among common objectives. To get there, brands are deprioritizing big-city flagships; promoting associates to “specialists” and “stylists;” sharing store inventories with the e-commerce channel; and measuring a store’s success on its ability to acquire customers, in addition to turn a profit.

For its part, 42-year-old Express, long known as a mall brand, has been in store-makeover mode since early 2020, following Tim Baxter’s appointment to CEO and the launch of the ExpressWay Forward strategy. It’s since made great progress on its store fleet rationalization and optimization plans. By the end of 2021, it fulfilled its goal of closing 100 underperforming stores. While most were in “lower-tier mall stores,” according to Baxter, they also included three stores in Manhattan, leaving only its Times Square store in NYC, as well as its Michigan Avenue location in Chicago. Their leases were up for renewal at the time, Baxter said.

In the year since, Express has been rolling out a new store model called Express Edit, centered on smaller stores with localized product assortments that are positioned in high-traffic areas. In the last month, it opened two Express Edit locations in NYC, in the Soho and Flatiron neighborhoods, and it opened one on Boston’s bustling Newbury Street on Friday. By mid-November, it will have added a location on Philadelphia’s Walnut Street and two locations in Miami, for a total of 11 Express Edit stores.

According to Baxter, Express Edit stores are set in “opinion-maker locations, chosen specifically for their neighbors.” The Boston store, for example, is steps from Ralph Lauren, H&M and Sephora stores, while the Soho store is surrounded by retailers including Bloomingdale’s, Lululemon and Aritzia.

“If you’re a modern man or woman, you’re shopping on that [Soho] block,” he said.

For Express, the goal is not to back fewer stores, but to have better-performing stores; new Express Edit stores will offset the stores that have closed.

“There was a long trend of having very large spaces in New York,” said Baxter. “But our new formats in New York are in a much smaller format. They’re going to allow us to recapture some of the lost sales in Manhattan without an extraordinary amount of expense.”

Rather than making large investments to gut-renovate existing storefronts and “hire architects to come up with extraordinary store designs,” as Express had done in the past, it’s intentionally “not spending a tremendous amount of capital” on its new stores, Baxter said. Each store has a consistent look and feel, achieved with details like common fixtures. Plus, making sweeping changes would have conflicted with the company’s intention for stores to fit the vibes of their neighborhoods, he said.

While, at 8,000 square feet, Express’s Soho store is larger than a typical 4,000-square-foot Express Edit store, “it’s still small for Manhattan,” he said.

During a Glossy Podcast episode recording last week, Untuckit founder Chris Riccobono also commented on the current money-suck that is having a large store in a large city like New York. “In the major cities, our stores are struggling because there’s no one there,” he said. “In Chicago, San Francisco, New York, Downtown Boston, the neighborhoods have changed for the worse, in many cases. And that’s going to take time [to bounce back].”

But both Baxter and Riccobono stressed their ongoing, overall strong belief in the power of stores. “If you’re going to be a brand that’s around for the next 50, 100, 200 years, you need stores,” Riccobono said. “It’s not just about what they do from a revenue perspective; we [also] ship from stores, and they’re marketing. … I laugh every time someone says brick and mortar is done.”

Gone are the days of merely regarding stores as sales channels. Baxter said retail’s popular “four-wall profit” benchmark still applies for Express stores, but the stores “serve a higher purpose.” That includes communicating the Express lifestyle, being a gathering place for the brand’s community and acquiring customers. About 50% of Express Edit shoppers are first-time Express customers, and a majority of Express customers first shop the brand in-store. “Considering the cost per acquisition, [our stores] are incredible investments,” he said. Meanwhile, the cost of acquiring customers online is at a high.

Along with being billboards, Express’s stores are fueling social content. At the company’s American Dream mall, King of Prussia, Pennsylvania and Dallas stores, Instagrammers are taking advantage of the large banquette seating positioned next to a velvet wall outside of fitting rooms. All Express stores have recently been equipped with more seating for added comfort.

On the topic of fitting rooms, elevating the in-store try-on experience is a priority for Express. Fitting rooms in newly remodeled stores have call buttons that alert associates when an alternative style is needed. They also offer custom lighting settings, allowing shoppers to see their outfit in “daylight” or “at a club,” Baxter said. One to two larger fitting rooms have been installed to allow for associate-led styling sessions, if desired. And where space allows, cash registers have been added to fitting room areas, allowing shoppers in a hurry to expedite their visits.

Along with supplying top-notch customer service, Express’s store workers are focused on providing styling support. Rather than direct each associate to be a “generalist,” Express assigns them a specific role. For example, there are store “stylists,” as well as workers entirely focused on operations. Baxter compared the company’s associates to influencers, noting that Express stores have “a Kardashian-level followership,” seeing 120 million customers per year.

Anthropologie Global CEO Tricia Smith agreed that, “You can’t staff your stores the same way you always did.” For its part, Anthropologie has implemented a dedicated and rotating “omni fulfillment team” in its stores. The idea is to ensure that workers servicing customers on the sales floor are not distracted by new omnichannel to-dos, like shipping online orders.

According to Riccobono, with Untuckit’s omnichannel capabilities, about 20% of its in-store inventory now gets shipped to online customers.

Other fashion companies that have recently announced store updates include J.Jill, TJX and Victoria’s Secret.

Much like Baxter, who reported that Express stores’ revenues are back to at least pre-pandemic levels, designer Nili Lotan said this week that her namesake brands’ lone, NYC store is “on fire.” She owed that to people wanting to “indulge and spoil themselves” following the height of the pandemic. At the same time, e-commerce businesses that spiked mid-pandemic are on the decline, Baxter noted.

Baxter questioned whether the rush back to stores will stick. He said Express will stay its course by prioritizing both digital and IRL sales, maintaining its goal of driving $1 billion in e-commerce demand by 2024. Focusing on both channels safeguards against future retail shakeups. Plus, he said, “Our best customers are the customers that shop us in multiple channels.”

Express’s earnings for the second quarter of 2022 showed net sales of $465,000, up 2% year-over-year. Comparable retail sales through Express stores and e-commerce were flat, with retail stores increasing by 6% and e-commerce demand declining 6%.

Walmart and Pacsun are kicking off holiday shopping earlier than ever

In a tight labor market, fashion brands are shortening their hiring and recruiting processes