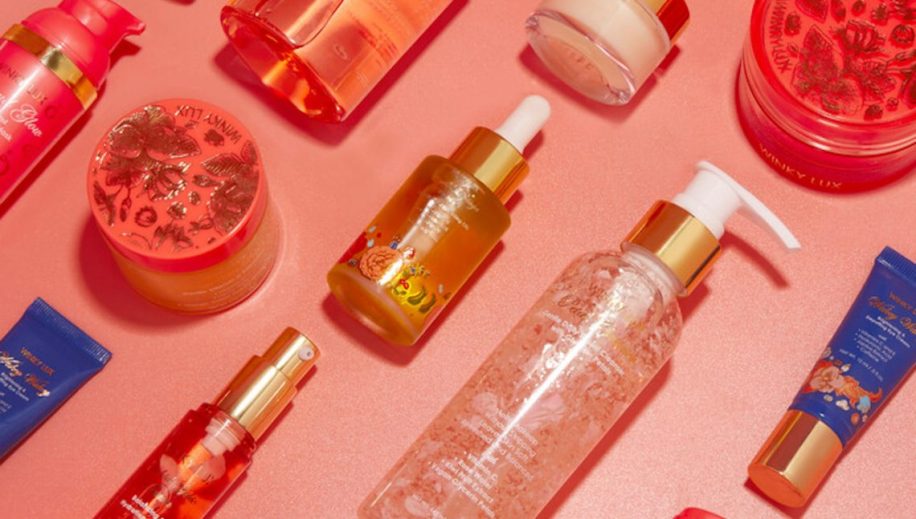 Launching skin care has become a natural step makeup companies are taking to drive sales and relevance in the ongoing pandemic. On Friday, millennial color cosmetics brand Winky Lux becomes the latest to make a play for the category, joining recent entrants like Fenty, Morphe and Cover FX.

Winky Lux’s skin-care debut includes 10 products. Among them are a cleanser, a moisturizer and a lip sleeping mask. They’ll be sold on the brand’s DTC site, and in all Target stores, 24 Macy’s stores and five Bloomingdale’s locations. Natalie Mackey, co-founder and CEO of The Glow Concept and Winky Lux, said the skin-care extension was a natural next step for the brand due to demand. Additionally, its sole skin care-only product, the Dream Gelée priming moisturizer, has had a repeat purchase rate of 43% since launching in 2017.

“The Dream Gelée was this workhorse product that was used to prep your skin before makeup, and it became one of our bestsellers. Our customers kept saying, ‘We want skin care, we want skin care, we want skin care,’ but we wanted to do in a hyper clean way and in a way that was still accessible [in terms of price point]. That was hard to do, because a lot of formulas on the market are cheap to make and don’t have great quality, but have a high price,” said Mackey. Winky’s skin-care assortment ranges from $18-$30.

Beyond price, Mackey said Winky Lux’s customer was looking for joy in her products. For instance, the company is known for its best-selling Flower Balm that features a real chrysanthemum inside. “Our customers weren’t coming to us for a clinical look. They want something from us that’s beautiful, jewelry-esque and fun,” she said. One way the brand captured that feel is by creating vegan petals that can be seen in its Petal Cleanser and Orchid Gelée Serum formulas. That type of aesthetic and experience are key to the brand’s “IRL online” strategy. For instance, throughout the Covid-19 health crisis, Winky lux leaned heavily on ASMR content in social media channels, so customers could understand the feel and performance of products.

The color cosmetics category has been slowing since 2018, due to a number of factors including an excess of brands and products. According to The NPD Group’s  “Makeup Consumer Report” in May, seven in 10 women reported wearing makeup less often this year. NPD also reported that makeup sales slowed by 31% year-over-year in the third quarter, to $1.4 billion.

Though being a multi-category brand has become more of the norm in beauty today, it is difficult to have authority in segments as disparate as skin care and makeup. Kylie Skin faced criticism upon launch in 2019 for its walnut scrub being promoted as as a gentle cleanser; the brand recently came under fire for launching a hand sanitizer. Glossier’s foray into more pigmented makeup, Glossier Play, failed to resonate with its no-makeup makeup fans. However, there are exceptions. According to industry insiders, part of the buzz around Charlotte Tilbury’s acquisition was that the brand reportedly had a near even split of sales between makeup and skin care; the branding for its hero Magic Cream product helped establish its greater skin care assortment, which now includes a range of “Magic” products. Thus, it was not pigeonholed as only a makeup brand.

Mackey hopes skin care will eventually be 25% of Winky Lux’s sales. Currently, 40% of sales are its lip products followed by other categories such as brow. “It’s the most requested product extension we’ve ever had, and we’ve seen that be an indicator of a product’s future success, so we’re excited” she said.