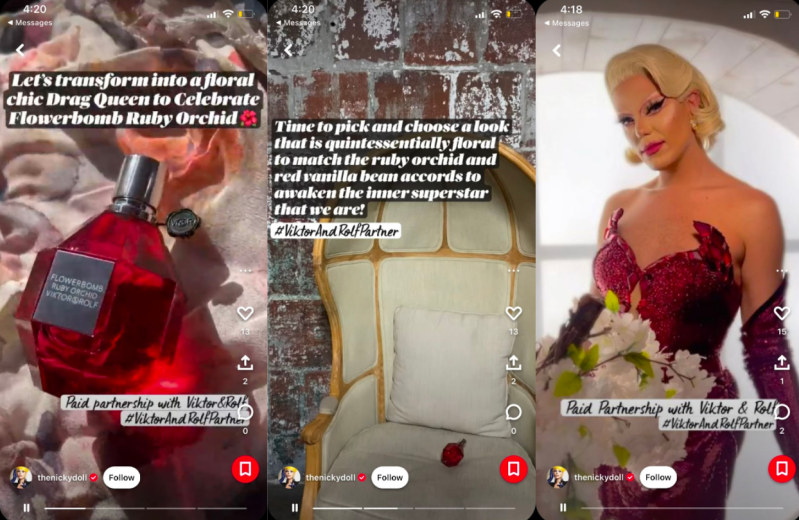 Today, the launch campaign for a beauty product often includes a heavy focus on TikTok (and a corresponding song and challenge). But for its new perfume, Flowerbomb Ruby Orchid, Viktor&Rolf decided to place a bet on Pinterest and its Idea Ads, a new advertising opportunity on the social network still in beta.

An Idea Ad is “an Idea Pin that has been created and promoted by a business,” according to Pinterest. These are Pins that can link back to the business’s account. They include a destination URL and the ability to follow a business account. When an Idea Ad also involves a paid partnership, that means the company has also paid for creator-produced content, which it can then promote from its own account, too. This is beneficial as it allows the company’s ad to reach more than one audience.

While it may not have earned itself a catchy tagline like “TikTok made me buy it,” Pinterest does drive sales. “No matter how much shopping has changed in the last year, what hasn’t changed is the powerful and critical role inspiration plays in helping us to decide what to buy,” the company said in a press release. “Eighty-nine percent of weekly Pinners use Pinterest for inspiration in their path to purchase, and 67M+ people engage with beauty content on Pinterest. Of those Pinners, 8 in 10 shoppers report discovering new beauty/personal care products or brands on Pinterest.”

“We were particularly interested in the Pinterest platform for two reasons,” said Catie Cambria, vp of marketing, Viktor&Rolf Fragrances. “One, it’s new to the brand, and Viktor&Rolf always loves breaking the mold and testing and learning with new platforms, partnerships and activations. The prospect of something new and different really appealed to us. And we really wanted to showcase the new Flowerbomb Ruby Orchid perfume in a different way to tap not only Flowerbomb classic fragrance fans but also to show Ruby Orchid to new customers on a platform they aren’t used to seeing it pop up on.”

Instead of just creating content purely revolving around the perfume itself, Viktor&Rolf and Pinterest collaborated to build on some of the trends Pinterest has flagged for 2022. These include “dopamine dressing” and “vibrant outfits,” the latter of which Pinterest said saw a 16x increase in searches between Oct 2019-Sep 2021. “Electric blue outfit” saw a 140x increase. These trends were used to inspire the content created for the campaign.

Viktor & Rolf tapped Nicky Doll (627,000 followers on Instagram) for this particular campaign. In Doll’s content, she shows a dramatic transformation with a spritz of Ruby Orchid giving way to a vibrant outfit meant to characterize the vibe of the fragrance itself. The post is titled “Let’s transform into a floral chic drag queen to celebrate Flowerbomb Ruby Orchid.”

Because fragrance is typically thought of as something a consumer needs to smell before purchasing, Cambria stressed the importance of storytelling in a digital campaign for perfume. You need viewers to be able to “see how that perfume might make them feel when they wear it, since they can’t smell it themselves,” she said.

This is also why Viktor&Rolf said it chose Nicky Doll as a partner. “Evoking a certain emotion, personality or character is something Nicky Doll does effortlessly in her gorgeous transformations,” Cambria said. “In this campaign, each of Nicky’s characters was different, each was avant-garde and a touch burlesque, and each was totally and completely Flowerbomb Ruby Orchid. We love working with creators who have mastered the art of storytelling with a touch of drama.”