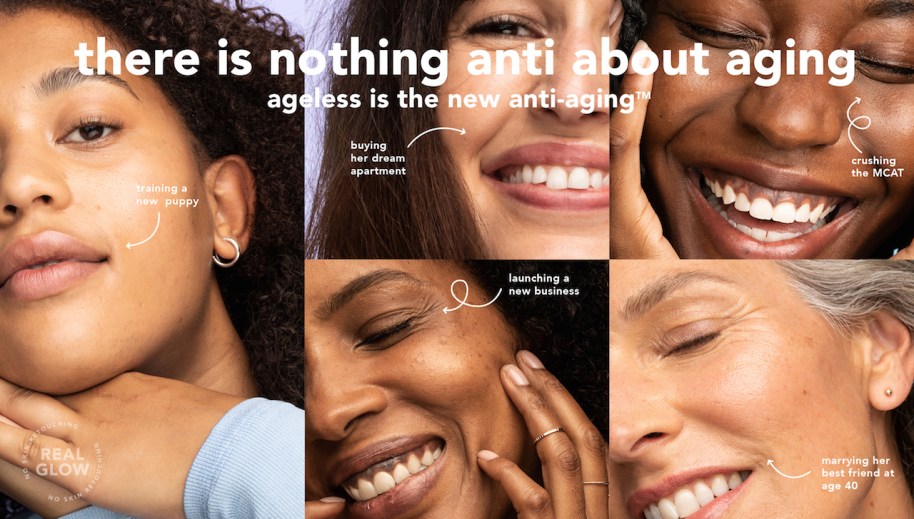 Tula, the probiotic skin-care brand, is introducing a new “ageless” category on Wednesday that seeks to put a positive twist on getting older.

The addition of the ageless category coincides with a new initiative across social media and Tula.com called #EmbraceYourSkin, in which Tula commits to no longer retouching photos in its brand marketing photography. At launch, the ageless category includes three existing products from the brand and two new products: a moisturizer and a serum. Tula’s core customers are ages 25-34, with 75% under the age of 35. Tula’s approach to its ageless category is similar to how many beauty brands are addressing sticky topics, ultimately seeking to be many things to customers by offering solutions to a problem while also trying to reframe the problem as a positive.

“As millennial customers start to enter the anti-aging category, they want to do it on their terms,” said Savannah Sachs, Tula CEO. “We’re thinking about skin positivity, which is why language matters, especially to the millennial generation, and we believe that there’s nothing ‘anti’ about aging. We want to be the go-to brand for millennials who are entering what we’re now calling the ageless category. [Anti-aging] can feel a bit dated and a bit daunting, so we want to do it differently.”

Tula sales have grown by 300% year-over-year for the last three years in a row, with DTC e-commerce comprising over 50% of its sales, said Sachs.

In a January survey of customers ages 30-34, Tula found that 57% of customers were interested in an anti-aging product, but only 30% were currently using one. Sachs said the team researched Google trend searches around anti-aging in order to understand how to rebrand the category while also clearly communicating its purpose.

Jane Cunningham, the founder of BritishBeautyBlogger.com has forgone using the phrase “anti-aging” since at least 2017. She said she has noticed an improvement around age inclusivity among beauty brands, but that beauty marketers do not understand how to embrace this change of thinking.

“Brands have spent years relying on the principle of terrifying women about the pitfalls of aging, in order to sell them a cream [that claims] to make it all better,” she said. “[Now] they really have to bring some thought to making their product seem attractive to an older audience in a new way.”

Brands across the beauty space are using euphemisms: There’s Dove with its product line called Pro-Age, using models in their 50s and 60s in its marketing; Olay with Age-Defying; L’Oreal with Age Perfect, and Vichy skin care with Slow Age. Allure magazine also banned the term “anti-aging” from its stories in 2017.

Whatever progress brands have attempted to achieve in the last few years has not improved how customers interpret their ads. Tula collected 10,000 responses from its customer survey that found that 70% of customers feel that beauty ads degrade their self-confidence. Only 1% of respondents said social media makes them more confident.

Additionally, the forces that influence the beauty industry today are increasingly in competition with one another, with brands contradicting themselves as they try to reconcile newer concepts of beauty with existing products and merchandising methods. For example, brands tout diversity efforts while also selling skin-lightening products, and they create skin-positive campaigns for products that treat acne. In the case of anti-aging, euphemisms simultaneously promote the idea that aging should not be viewed as a pejorative while also subtly imposing shame on a person who seeks preventative products. Even in the attempt to be progressive, the idea that people (in this case, mostly women) are somehow aging incorrectly (if such a thing can even exist) continues to pervade.

Tula’s interpretation of the word ‘ageless’ evokes the aging gracefully narrative. Yet, the definition of “ageless” introduces a contradiction to its usage as a positive, as it means “not aging or appearing to age,” which is at odds with the industry’s attempts to jettison the phrase anti-aging. The words can change, but the concept remains more or less the same.

“[Ageless] is something that we are willing to take a risk on, because we believe this is so important, and our values are around inspiring confidence,” said Sachs, adding that the tagline “Beautiful before, beautiful after” for the #EmbraceYourSkin social media and dot-com campaign is able to imply that products have great results, while also communicating that the state of your skin does not correlate to your self worth.

Because of the nuances and explanation required of the ageless category, Tula has an omnichannel approach across Tula.com and all Ulta stores, where it is sold exclusively. Tula produced photos, videos and animations with a Willy Wonka-inspired science lab theme, said Sachs. The campaign is meant to celebrate wrinkles as totems for lived experiences like having children or earning smile lines. Over 700 paid and unpaid influencers were also tapped by the brand to discuss the #EmbraceYourSkin initiative and confidence through their social pages. Over 50% of Tula’s revenue is through influencer affiliate marketing.

“Beauty isn’t one thing; it’s many things. And halting the narrative that older women are not beautiful needs to happen quickly, if we do not want our daughters or any young woman to think of beauty as something that [one loses],” said Cunningham. “Your beauty changes because your face does – but nothing is lost and, in fact, everything is gained. To see an older woman with smile lines reflecting joy and laughter in her life — what isn’t beautiful about that?”