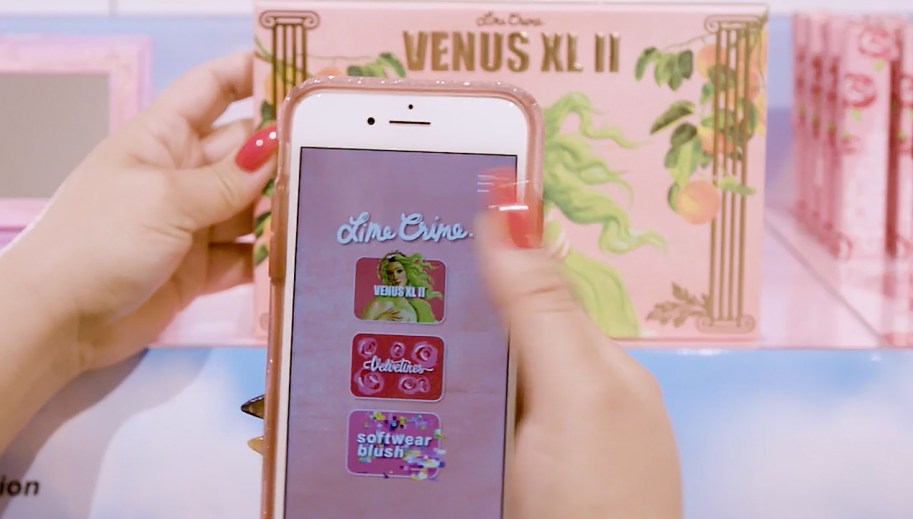 ‘This will cut through the clutter’: Lime Crime debuts AR app to communicate its story

Color cosmetic brand Lime Crime is turning to augmented reality to bring its products to life.

On Wednesday, Lime Crime launched an app, available for both Android and Apple iOS, to enable augmented reality entertainment through its packaging and in-store displays. The app works with two products — its Venus XL II eyeshadow palette and its Softwear Blush — as well as with in-store gondolas at all 18 Riley Rose locations, where the brand is sold. In the fourth quarter, the AR feature will debut at Lime Crime displays in all 1,200 Ulta locations, and additional products will be synced with the app on a rolling basis, although Lime Crime declined to say how many more would be added in 2019.

“One thing is that experiential retail is the future. All of us, as customers, and particularly Gen Z and millennials, are interested in [that type of] retail,” said Stacy Panagakis, Lime Crime CEO. “Our products and packaging are made for this experience.”

Lime Crime is taking a three-pronged approach to AR, focused on entertainment, experience and education. The AR app’s functionality works by first opening it on a smartphone and then scanning the phone over the palette, blush or gondola. For the eyeshadow palette, the character featured on the package (inspired by Botticelli’s “Birth of Venus”) begins talking to the user about the product, such as its available shades and texture, before showing tutorials on how to use it. The tutorials feature paid influencers, like Lina Assayed (@linabugz, 136,000 Instagram followers) and Lauren Rohrer (@laurenroher, 508,000 Instagram followers). When a customer scans the blush with the app, it creates a 360-degree, 3D flower display. The gondolas are equipped with markers to scan and include the same content as the palette and blush, as well as information on two lip products called Velvetines and Plushies.

AR has become increasingly popular within the beauty world, but mostly as a way to facilitate virtual makeup try-ons. Modiface and YouCam, two of the most popular AR companies, allow users to test out different makeup looks, hair colors and even nail colors. Sephora and Charlotte Tilbury have used AR in-store, through mirrors, to also facilitate virtual try-on.

For Lime Crime, the purpose is not to help customers try-on makeup up, but instead to embed information in an entertaining and bite-sized way, said Panagakis. It plans to share makeup tutorials, product information and its brand story, for example, in its AR capabilities.

“In this [current climate], it has become more difficult to tell a brand story. [The beauty industry] becomes too focused on launching products, versus slowing down and telling a story around the products, such as why it’s important and what it will do for customers,” said Panagakis. “We think the AR experience will cut through that clutter.”

In June 2018, private equity firm Tengram Capital Partners (which also has skin-care brands RéVive and This Works in its portfolio) purchased a majority stake of Lime Crime. Terms of the deal were not disclosed, but Lime Crime brought in an estimated $30 million in net sales in 2017, according to WWD. Founded in 2008, the brand had previously faced issues related to its founder, Doe Deere (real name Xenia Vorotova), including a class-action lawsuit, public backlash and a reprimanding from the Food and Drug Administration tied to mislabeling.

To promote the app launch, Lime Crime is investing in paid ads through Instagram and Facebook, as well as working with 10 paid influencers beginning in the third quarter. A company spokeswoman declined to provide the names of the influencers, as they are not yet confirmed.  To support the growth of Lime Crime and its AR initiative, the brand’s marketing budget grew double digits between 2018 and 2019, said Bianca Bolouri, Lime Crime vice president of marketing.

Going forward, Lime Crime may solicit social media followers (it has 3.5 million on Instagram) to select the next product added to the AR app, said Panagakis. Either way, Lime Crime is measuring the success of the app through the percentage of repeat users.

“This is not just about Lime Crime, but also what we can offer to the consumer that adds value and excitement,” said Panagakis. “It goes back to creating and thinking about the customer, and asking how we can involve him or her in a way that engages them and helps them in their beauty routine.”