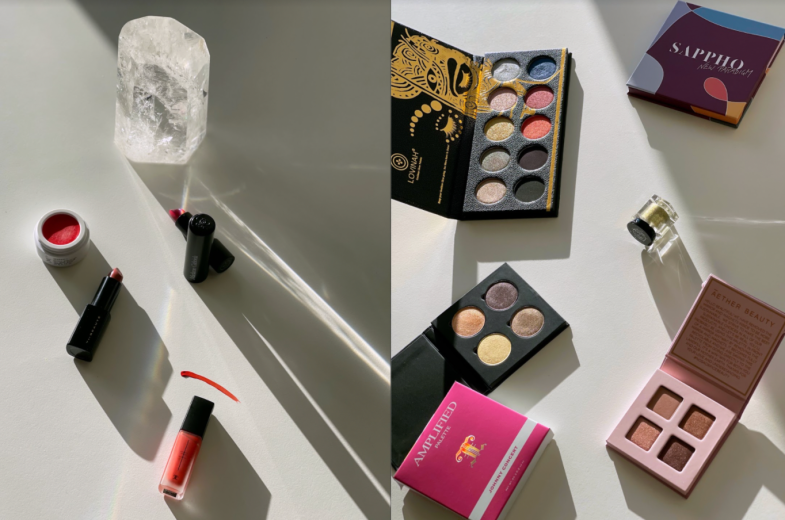 Influencer collaborations and influencer marketing, in general, are often associated with a young, Gen-Z demographic using platforms like TikTok. But in the indie beauty space, where prices tend toward the high end of the spectrum, the younger demo is not the only demo that matters. Brands in the category are designing their collab strategies accordingly.

Lola Gusman, also known as The Hermès Hippie on Instagram (15,000 followers) has a following who comes to her for luxe recommendations. The 44-year-old influencer posts about high-end products, like May Lindstrom’s $180 cult-favorite balm, The Blue Cocoon. Boxwalla, founded by Lavanya Krishnan, is a company known for its subscription boxes. Its bi-monthly beauty box is $50. When Boxwalla first launched in 2015, founder Lavanya Krishnan sent a box to Gusman, and, over time, the two became friends. Now, they’ve paired to launch a makeup shop that will live on theboxwalla.com. It is the company’s first ongoing foray into the makeup category — previously, it has done limited edition makeup boxes, available for individual purchase outside of its typical subscription model.

Launched February 5, the makeup shop can be found on the Boxwalla site and is split into three categories: eyes, lips and face. It features indie brands, some of which can also be found at retailers like Credo Beauty and The Detox Market. They include Fitglow Beauty and Athr. It also features harder-to-come-by brands like Marie Hunter and Manasi7. It will continue to live on Boxwalla’s site in perpetuity. “We wanted to be very clear that this wasn’t just a ‘collab,’ in the traditional influencer sense,” Gusman said of the ongoing partnership. In fact, it’s become like a third full-time job for her, she said. She already works as both a lawyer and a content creator.

Krishnan said she wanted to work with Gusman because she is “highly regarded in the space for her taste and ability to discover products and trends within niche beauty before others do.” She called the partnership “inevitable.” Gusman also caught Krishnan’s attention for seeking out products on her own, independent of PR or advertising relationships. Up until now, Boxwalla has done just a handful of paid partnerships and sent its boxes to a small group of influencers and content creators; it has not played extensively in the influencer marketing space.

The influencer-as-curator is an increasingly popular brand play; numerous retail sites allow influencers to direct their followers to a page featuring their picks. In the skin-care space, Paula’s Choice partnered on a bundle with skinfluencer Sean Garette, while Versed partnered with derm-influencer Chris Tomassian on a product kit. In this case, Gusman will continue to be involved in Boxwalla’s makeup shop and has been talking about it on her Instagram for months — leading up to launch, and then, in celebration of it.

The shop offers products ranging from $12-$82 and currently features around 400 SKUs, Krishnan said. Though Gusman’s platform might help draw attention to the new shop, the duo said their goal was also to create a space for more inclusivity in makeup. Krishnan spoke about how experiencing a lack of diversity in makeup has been personal to her as an Indian immigrant to the United States. Back in December, when the partnership was first announced, it drew criticism from the Estée Laundry Instagram account for its focus on diversity, within a partnership with a white cisgender influencer.

“We looked at inclusivity and diversity both from the perspective of creators and consumers. As a brown immigrant myself — I don’t always feel like I’m the target audience for many luxury beauty retailers,” Krishnan said, “I consciously decided not to signal which are our ‘BIPOC’ brands and which are our ‘Black-owned brands because we want people to engage more deeply with each brand.”

Krishnan cited the global heritage of the brands in the shop as one way she and Gusman sought to define diversity in the shop, citing examples like “African-inspired Lovinah, Caribbean-inspired Plenitude, Manasi7 is Swedish, Flavedo Albedo is Australian.” Separately but relatedly, Fluide is a brand all about expression beyond the gender binary.

All that said, the shade ranges for indie brands, which operate on tighter budgets than those owned by conglomerates, are not always as broad as they could be. “We are always working on filling that gap and encouraging indie brands to expand their shade ranges,” Krishnan said.

“I have not seen a curation like this anywhere else,” said Gusman. Though diversity was a focus, the duo consciously elected not to create a section denoting which brands are “BIPOC-founded,” citing “ethnic aisles” as a problematic way to do retail. Otherwise, Gusman just wanted to spotlight “products that are awesome,” she said.

She added, “Genuinely, every one of the products is something that I am psyched to use.”