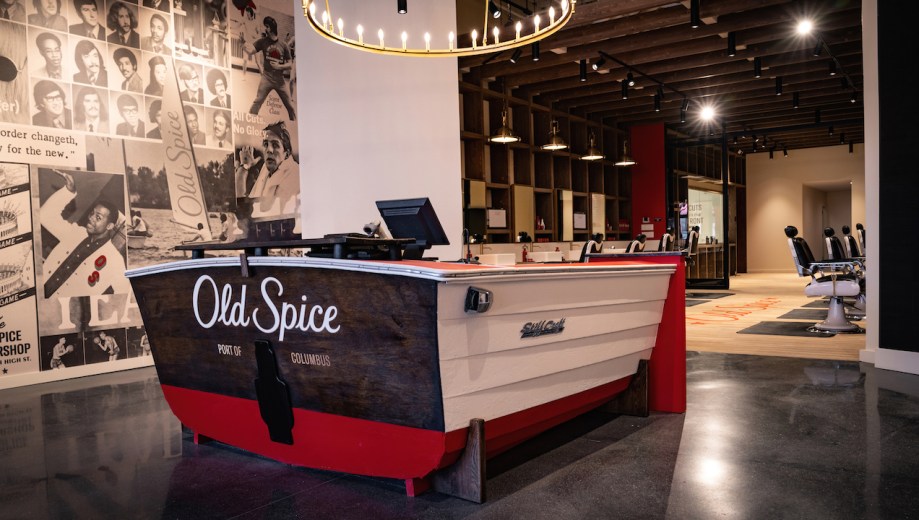 Old Spice opened its first barbershop and standalone retail location on Wednesday in Columbus, Ohio to increase its reach.

Old Spice offers an e-commerce direct-to-consumer sales channel, but the barbershop flagship is the first permanent standalone brick-and-mortar store from the P&G-owned heritage brand. The shop, situated on the main shopping street next to Ohio State University, features Instagrammable elements such as a wooden boat chopped in half for the reception desk and 3D models of various hair cuts and styles. In addition to the retail and barbershop space, the space houses a content studio, where visitors can create and share real-time social and digital content. It’s also home to a residency program for well-known barbers. They can host clientele visits and appointments, shoot social media content, and engage in meet-and-greets. Leif Edgar, Old Spice Hair brand director, said the goal is to welcome 50,000 people into the store in the first 12 months.

“We don’t want it to feel corporate or stuffy. From a retail standpoint, we have plans to leverage the shop in a way that is not just about selling our hair products, but also about offering one-off partnerships like collabs and [exclusive merchandise], in a way that you would see a lifestyle brand behave,” said Edgar.

Because the primary goal of the store is to be a place for content creation and hair product promotion, Old Spice is focused on how much content it can create and how quickly. That can also fulfill the needs of retail partners, like Walmart, which seek out timely and fresh brand content to promote on their own digital channels. But the physical element of the flagship also has distinct use cases beyond social media. Edgar said the proximity to young college-aged men and the area’s diverse population were central to the location choice. According to Ohio State University, nearly 24% of its student population is BIPOC. In Jan. 2020, Old Spice refreshed its iconic 2010 television campaign to appeal to a more progressive, young demographic.

“If this [flagship location] is successful, we have our eyes on potentially expanding the barbershop into other markets and cities, and we’re looking at places with similar profiles, like an urban demographic and major college town,” said Edgar.

At the time of this reporting, nearby commercial retail properties were advertised at $38 per square foot, meaning Old Spice’s flagship lease would cost approximately $133,000 per year. Edgar declined to comment on lease costs or the store’s build-out.

In the future, the barbershop flagship could be reformatted into shop-in-shop concepts with retail partners, Edgar said. Notably, Ulta already offers styling services for women at its locations.

“The transactional part of retail is becoming more efficient. People are more comfortable purchasing online and using flexible fulfillment. That opens up more opportunity to think through how you use space, in a deeper way,” said Melissa Gonzalez, CEO and chief strategist for retail experience agency The Lionesque Group.

Ana Pelucarte, co-founder of retail consultancy Pop Up Mob, said, “When doing something for so long, [Old Spice is] going to have to be strategic in terms of what they’re tying this flagship to. They can’t keep the same experience for a whole year, because at first it is going to be novel and fun, but then it’s going to be stagnant after a couple of months.”

Between Wednesday and March 1, the flagship has a soft opening before being available to the general public. Because 50,000 people a year equals roughly 136 people per day, Old Spice must be cautious about Covid-19 restrictions. The barbershop’s eight seats are spaced six feet apart, and the company has installed air filtration systems. For now, Old Spice is not hosting any major activations to bring people into the store, but as “things return to normal,” the shop will become a marketing hub with athlete meet-and-greets and media engagements, Edgar said. He added that the goal is to reach 80% of men in the Columbus, Ohio area.