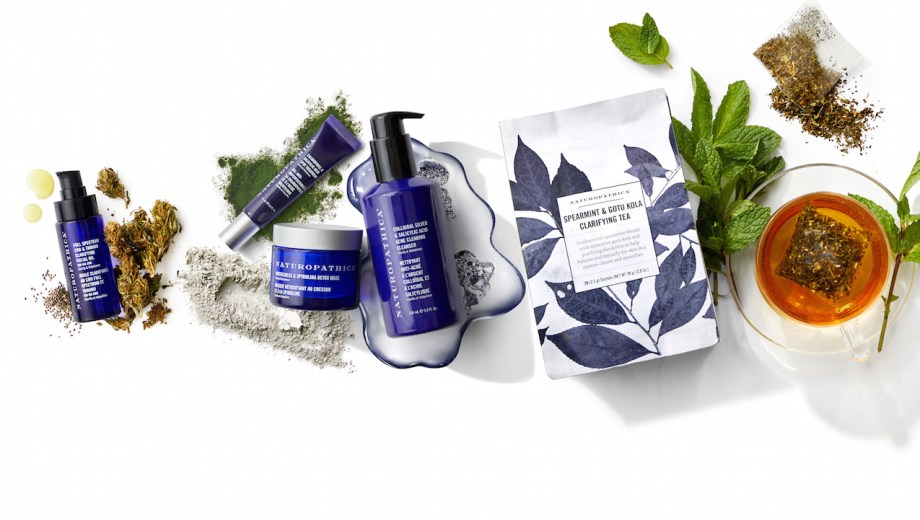 Naturopathica is the latest to take on acne via clean beauty

As the clean beauty category has matured, customers are frequently turning to indie brands for acne solutions versus legacy companies like Clearasil or Proactiv. Twenty-five-year-old company Naturopathica is the latest to jump on this growing ask from shoppers. On Tuesday, the brand launched a collection of five acne products including a tea, a cleanser and a mask to treat acne; it is the first time that Naturopathica is addressing this concern in its company history.

“As people come to understand how stress and hormones play a role in acne, there is a greater understanding and expectance for holistic treatment,” said Emma Froelich-Shea, Naturopathica president, who previously worked at Clearasil. “We are reaching a broader age demographic. We can reach younger people suffering from acne, but women [also experience acne] into their 40s.”

Naturopathica has more than 350 distribution partners, including independent spas Follain and Dermstore; plus, it has three of its own brick-and-mortar stores. Its core customers are between the ages of 28 and 44, and approximately 80% are women. Naturopathica declined to share any sales or growth figures.

Naturopathica’s expansion to acne is not unprecedented. Clean skin-care brands like BioClarity, Rael, True Botanicals and Dr. Roebuck’s have emerged with an acne focus or launched acne products over the last four years. The acne space is also a suitably large market for a brand with increased growth expectations. (Naturopathica received a majority investment from GF Capital Private Equity in May 2018.) According to the American Academy of Dermatology, acne is the most common skin condition in the United States, affecting up to 50 million Americans annually.

Post-investment, the company’s updated strategy included hiring Froelich-Shea in March 2019 as its first president, launching a new website in February 2020 and displaying a new tagline, “For Deeper Beauty.” Froelich-Shea said she feels the acne collection is a meaningful example of the tagline and brand positioning “coming to life.” The brand has so far launched seven new products in 2020, including the five acne products, and it opened its latest store in December 2019.

“The vision that [GF Capital] had was that Naturopathica is a brand that is poised to grow in all of its channels,” she said.

Naturopathica and other clean brands are certainly on trend: Gentler and cleaner solutions are becoming a frequent request of dermatology patients, said Genevieve Vielbig, a nurse at New York City-based Just Ageless medspa.

“My patients are always seeking the most ‘natural’ way to clear their acne up, as most don’t want to take Accutane or oral antibiotic medications,” she said. Still, the best-selling acne brands in the United States remain mass retail brands like Neutrogena, according to Statista. As of June 2019, Neutrogena earned $94.9 million in sales, followed by Differin at $45.5 million and Clearasil at $30.8 million.

To make a dent in the market, Naturopathica is making more robust marketing efforts for the acne collection compared to prior years, said Froelich-Shea. An undisclosed number of customers will receive eight emails, and 50,000 targeted and prospective customers will receive at-home mailers in the last week of March. Naturopathica also produced 30 video assets it will share online. The company will feature men in its visual assets for the first time, as well as include older women. Naturopathica is also working with at least 200 paid and unpaid micro- and macro-influencers, who will receive a 30-day trial of product to review on social media. Spa and retail partners will receive at least 40,000 samples to offer to customers and will customize promotions to drive sales.

“One of the things that we hope to do with this collection is to eradicate the stigma, because [acne communications] are very outdated,” said Froelich-Shea.