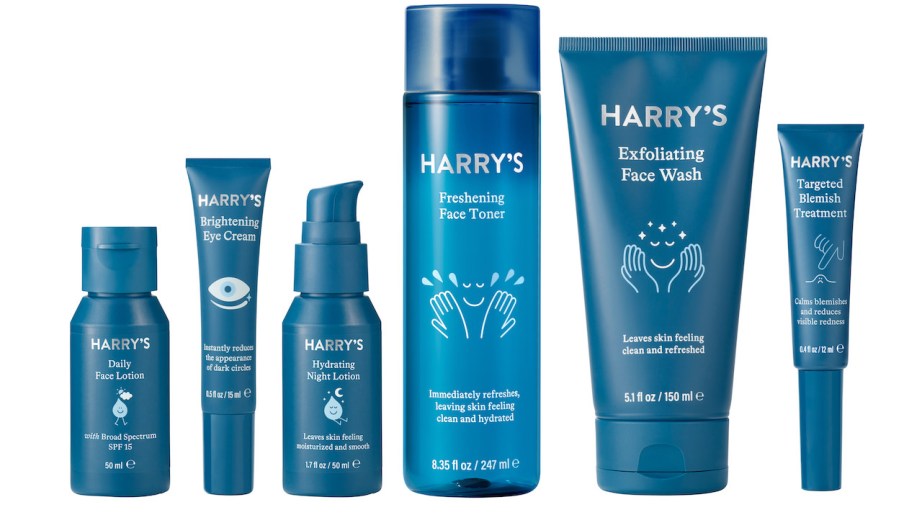 ‘Most guys don’t even wash their face’: How Harry’s is leveling up skin care for men

From toners to eye creams, the skin-care products available for men are becoming more numerous and varied as startups vie to get them to adopt a routine, and stick to it.

Last week, men’s shaving-turned-grooming unicorn Harry’s became the latest men’s brand to expand its range of skin-care products beyond the basic cleanser and lotion, adding a toner, eye cream, night lotion and blemish treatment to its lineup. It joins a range of startups and conglomerate-owned brands introducing a multi-step skin-care routine to men. According to Euromonitor, the men’s skin-care market excluding shaving products in the U.S. was worth $402.8 billion in 2020, up 2.2% from 2019.

“Most guys don’t even wash their face,” said Jaime Crespo, Harry’s gm. But he said the number of men getting into skin care is “growing fast and aggressively, as they have a bit more of understanding of what’s out there and are more aware of their needs.” He added that there “has been an evolution from what the market was three years ago.” GlobalData survey results found that, in 2019, 46% of U.S. men were willing to increase the number of products they use in their beauty and grooming regimen. In 2021, 39% of U.S. men described their spending on skin care as high, 24% described it as a medium and 20% described it as low.

Harry’s currently has 20 million customers across North America and the UK in its core shave business and has been pursuing growth through expansion into more personal care categories and sub-brands. These new categories have worked as growth drivers. In the last four weeks, Harry’s body wash DTC sales increased 47% year-over-year, with over 30% growth at retail partners. Its revenue grew 24% year-over-year in 2020, according to Crespo. For skin care, it has been focused on developing products for shoppers looking for a more sophisticated regime, partnering with Heyday on a mask in 2019.

While marketing for its shaving products has focused on encouraging men to switch brands for products they already use, its skin-care strategy is aimed at introducing them to a new category. This will be done by “providing education to the consumer, and making them aware of how this product could help them, how their skin could be healthier and how to feel good in the moment,” said Crespo. Harry’s will market to the brand’s existing DTC customer base via its newsletter and social media, and will feature detailed product descriptions in the store displays at Target, the exclusive retail partner for the new launch.

While Harry’s earned its unicorn status by starting with shaving and then branching out, other men’s startups have emerged in the past three years with an emphasis on skin care from the start. These include Ceylon, Huron, Disco, Jaxon Lane, Geologie and Soft. Each has a range of products beyond basic cleansers and moisturizers, including toners, eye serums and masks (such as Jaxon Lane’s “Bro Mask”). Men also now have a growing range of skin-care options from gender-neutral skin-care brands such as Fenty Skin, Humanrace, Non Gender Specific and Good Light, and their accessible counterparts like The Ordinary and The Inkey List.

“The gender-based positioning is still most prevalent [in the beauty industry] and delivers a secure way to target men,” said Nina Nowak, a senior innovation researcher at GlobalData. “But we can already observe the impact of changing social norms on gender-related product positioning.”

According to CB Insights, Harry’s commands the majority of the $183 million in funding that has been awarded to men’s grooming startups so far this year. In March, it secured a $155 million round after a $1.4 billion acquisition deal by Edgewell was blocked by the FTC last year.

“Outside of Harry’s, seven companies receiving funding this year offer at least one skin-care product for men, showing that men’s grooming is moving into territories beyond shaving, [to include] serums, masks, face scrubs and more,” said Kenya Watson, intelligence analyst at CB Insights.

The main strategy for getting men to adopt more complex skin routines needs to be about “making it very easy for them to navigate,” said Crespo.

“[Men] are unsure of where to begin and which products to use,” he said. “[But Harry’s] is creating a regimen that is simple, that is easy to adopt and that is very clear, with [product] names that are not overtly creating a barrier.”