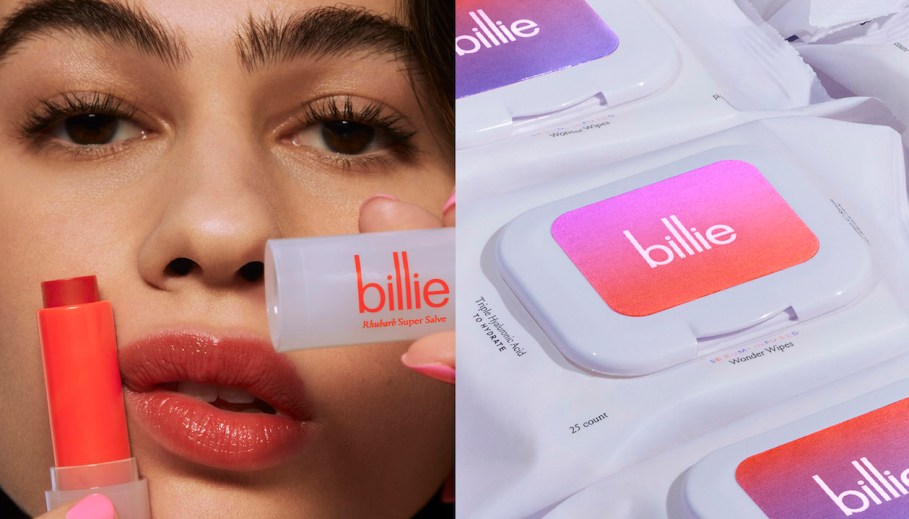 On Tuesday, Billie expanded outside of its subscription razors, shaving cream and body care to offer dry shampoo, face wipes and lip balm. This is its first product expansion outside the shave category and after P&G announced its intent to acquire the DTC company in January.

The expansion represents Billie’s confidence that it can thrive in other categories, following through on its goal of becoming a clean female body brand, according to Georgina Gooley, Billie co-founder. Billie will offer its face wipes as a subscription, while lip balms and dry shampoo will be sold à la carte. (All products are under $15.) Alongside its new products, the Billie website is receiving a new look that accommodates its razor and all body products.

Billie is in a prime position to grab more market share since P&G’s purchase when compared to competitors like Athena Club and Flamingo which have also expanded their product portfolios — Flamingo’s parent Harry’s faced a setback when its attempts to be acquired were stopped. Billie declined to disclose any financials but said the product expansion began in January 2019 and P&G was not involved. The brand previously raised $35 million in venture capital funding.

“From a product perspective, anything in a woman’s routine is fair game [for Billie], whether it’s their shower or grooming routine,” said Gooley. “There are some good products out there, but it can be hard to justify the price tag. If you use it every day, it has to be affordable.”

Billie has garnered impressive growth, according to commerce data company Rakuten Intelligence. Data provided to Glossy indicates that its substantial market leader status began in May 2019, following its last round of funding of $25 million from Goldman Sachs in January 2019. Rakuten data did not provide sales figures but showed that Billie’s sales volume increased by 268% year over year as of December 2019. Additionally, over the past three months, Billie has seen a 56% repeat purchase rate, compared to Flamingo, which has seen 9%.

“When we take a deeper look into the sales volume, we see that the growth in sales is really driven by the buyers,” said Mary Pietsch, Rakuten Intelligence analyst. “When we see a brand having any kind of substantial increase in buyers, the norm is that the average spend per buyer temporarily dips, as new buyers tend to spend less. Billie actually was able to buck this trend, and the average amount spent per buyer increased by 2% during that same time, which is a pretty amazing feat.”

As part of its marketing campaign, Billie is working with the Environmental Working Group’s data to create a Clean Cash Calculator that informs consumers how clean their personal-care products are, according to EWG standards. Customers will be driven to Billie’s website through social channels and paid social ads, where customers can enter a product’s name from a range of brands to see a score from 1 to 10, with a 1 allocated to products that are most adherent to EWG guidelines. All Billie’s products are ranked either 1 or 2, and all customers are given a coupon for Billie products that’s equivalent to the difference between their product’s ranking and Billie’s. This offer is good for the following three weeks.

“[Clean] means a lot of things to different people,” said Gooley. “We can say we are clean, but what we wanted to do was to give people information to make that determination themselves.”

In addition to the Clean Cash Calculator, Billie is reaching its customers through its database of email and SMS text message subscribers. On Tuesday, an undisclosed number of subscribers will receive an email announcing the launch of products, and then one to two emails a week for the duration of the campaign. Additionally, the brand will direct people to its website through social media posts on Facebook, YouTube and Instagram; paid search ads; and traditional media coverage. Existing customers with a subscription will be able to add products to their basket at checkout. Billie declined to comment on whether its launch or marketing is affected by Covid-19, but said it is donating $100,000 as part of its existing corporate social responsibility mission.

Pietsch added that if Billie is able to replicate its existing success with razors to its new products, then its strong subscription base of customers should be receptive.

“Obviously, you can talk about your products in certain ways and run ads, but ultimately, the products will have to speak for themselves,” said Gooley. “[But] we are launching with a message of why we created these products and why clean is important.”