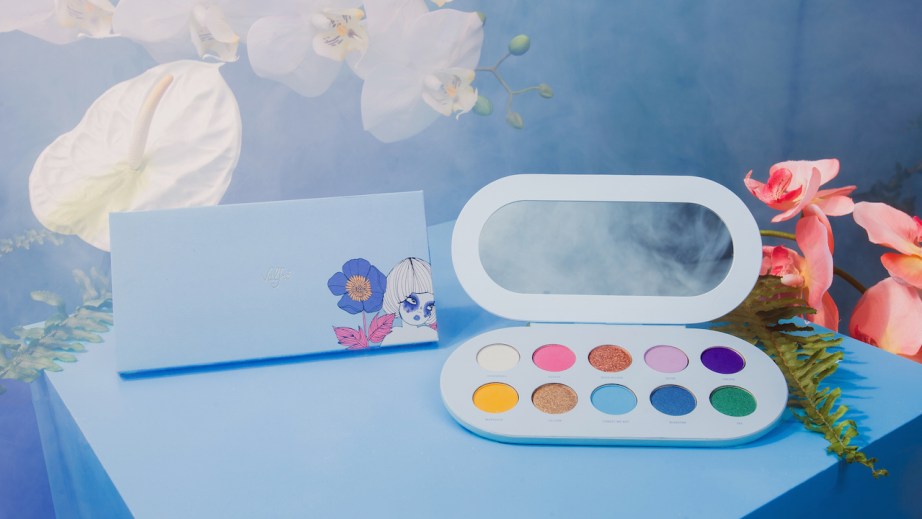 Indie clothing brand Valfre, which has 800,000 Instagram followers, is the latest fashion brand to move into beauty.

Founded in 2013 by Ilse Valfre, the brand is known for selling apparel, accessories and small home goods. Products typically feature edgy, cartoon-like female characters with comic book and Japanese anime influences. It will move into makeup beginning on Monday, with the launch of an eye shadow palette.

Valfre plans to expand its beauty assortment to lipstick, face stamps and glitter body gel by September. The brand is sold in 28 countries through independent retailers and has collaborated with Topshop and Urban Outfitters. It is also sold through its e-commerce site, Valfre.com, which accounts for 90% of sales, said Donald Eley, CEO of Valfre (and Valfre’s husband).

Fashion companies with makeup lines are often legacy brands, like Gucci, or large fashion retailers, like Urban Outfitters and Zara, and utilize a private-label partner. Valfre, for its part, has no stores of its own. The brand did indeed use a third-party company to create its makeup line, but declined to name the company. Unlike other Instagram-famous names, such as Kristin Ess, whose products were first developed in partnership with Target, Valfre’s offering was primarily created for its DTC channel.

“Jumping into makeup was very important. It is a form of art and self-expression,” said Ilse Valfre, founder and designer of Valfre. “We study our customers, and they are into beauty and makeup. They have a very unique aesthetic; they want to be individuals, and makeup is a great tool to do that.”

Valfre’s core customer group is between 18 and 24 years old, said Eley. The company declined to state annual revenue, but in 2016, it earned $2.5 million, according to Forbes.

Gen Z has become known for its willingness to spend more on makeup than apparel, plus the demographic is loyal to beauty brands showcasing inclusivity and diversity. They are also vested in self-expression through makeup, with 8 out of 10 Gen-Z teens and young millennials saying “being yourself” is the phrase that best fits their personal definition of beauty, according to a report from Viacom. This works to the advantage of Valfre, which is based on colorful and distinct illustrations, said Eley.

“We’re unique, because the brand is based around artwork. It’s a different [approach] to beauty, and it allows us to establish certain themes,” he said. For example, the Electric Garden palette featuring 10 bright matte and shimmer colors was designed by Valfre and packaging designer Erica Gibson to look like a premium chocolate bar.

To promote the expansion into makeup, Valfre has been sharing the news on its Instagram account since mid-June by revealing an up-close photo of one eye shadow color every day as a countdown to launch. On June 21, Valfre hosted an event in Los Angeles with 150 guests, including Michelle Pham and other macro- and mega-influencers like Laura Lee. This was followed by a one-day pop-up the next day, in the same event space.