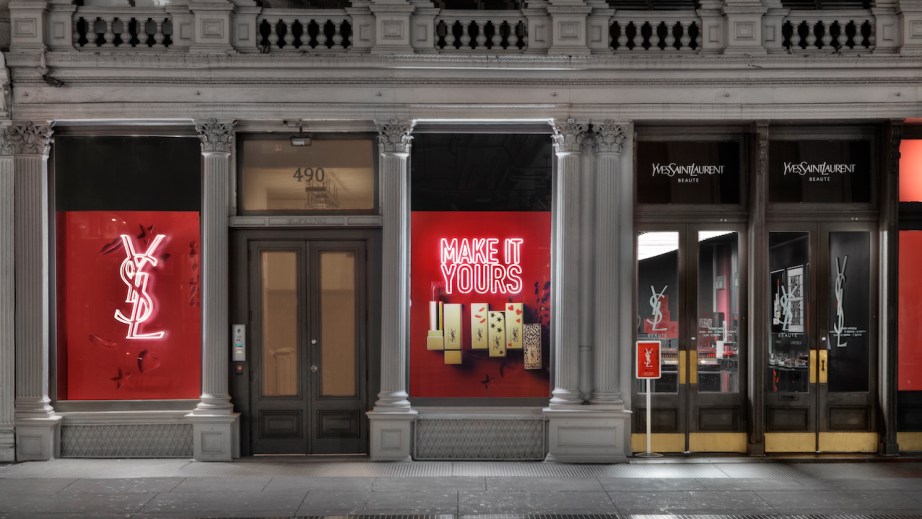 How YSL Beauty plans to conquer the luxury makeup market

Despite a crowded beauty market L’Oréal Group-owned YSL Beauty has managed to carve out space for itself over the past four years.

Since 2014, the brand has managed to grow sales by double digits every year, according to Verane de Marffy, svp of marketing, communications and education at YSL Beauty. (Sales were up 17 percent year over year as of October 2018.)

The growth began with its fragrance category, with the 2015 release of the Black Opium. Eleven additional fragrances have launched since, and another will debut in early 2019. According to the company, fragrance sales have increased by over 28 percent year-to-date. The brand has also heavily invested in pop-ups since 2016, seeing them as both brand awareness plays and data collection opportunities.

Currently, it sees potential in associating itself further with Yves Saint Laurent, the designer. Mixing heritage with newness has long been the focus of YSL Beauty’s marketing, and it has recently added younger ambassadors, like Zoe Kravitz, Adam Levine and Kaia Gerber to its mix. “We have solidified our cool-couture brand positioning,” said de Marffy.

The pop-up playbook
In the retail landscape, pop-ups have become de rigueur. According to Retail Next, the pop-up industry is valued at $50 billion. The beauty category is especially tapped into this concept. YSL Beauty opted in 2018 to create experiential, two-day “Beauty Hotel” events in Paris and New York City (in January and September, respectively). The pop-up consisted of five floors of immersive and interactive experiences, like fragrance workshops and an Instagrammable rooftop terrace café.

“In a very congested beauty world, with so many pure players and dot-com brands, how does a brand like YSL stand out? And that’s the premise for the pop-ups,” said de Marffy.

The first beauty hotel in Paris generated 2,000 social media posts and 1.4 million engagements (measured in “likes” and comments), with an overall reach of 160 million on social media, according to WWD. The hotel pop-up then traveled to the SoHo neighborhood of New York City in September, earning 41 million social media impressions and 88 million print and digital publication impressions, according to de Marffy.

In addition to its own pop-up series, YSL Beauty also participated with Sephoria, Sephora’s own beauty convention, in Los Angeles in October. The brand was part of the “Lipstick Lounge,” which also featured Sephora Collection and Bite Beauty. YSL Beauty outperformed those two brands in sales during the event, according to de Marffy. The brand also held 31 other pop-ups across the country this year, with retail partners such as Macy’s, as well as independently hosted pop-ups in venues like the Ace Hotel in Los Angeles.

For the upcoming year, the brand has no intention of slowing down what it considers a winning strategy: It has six independent pop-ups confirmed in the U.S. for 2019, along with 15 more with retail partners. But the intention of the pop-ups and elements of presentation will shift, de Marffy said. While 2017 and 2018 pop-ups were about brand awareness and social buzz, the upcoming pop-ups will transform into more concentrated recruitment events for customer data beyond gathering email addresses. For example, the brand rolled out a new loyalty and rewards program around its SoHo pop-up and used it as an opportunity to sign up customers and learn more about them. YSL Beauty did not disclose how many rewards program members it currently has. “[Pop-ups] are key in gathering data on new clients and driving key retail partners,” said de Marffy.

Leaning into Yves
Since the 2012 revival of the Yves Saint Laurent couture brand (after first closing in 2002), which is owned by Kering S.A., the fashion brand has undergone a renaissance — YSL Beauty hopes to capitalize on this, even though the makeup brand does not retail in most of the fashion brand’s stores. Since designer Anthony Vaccarello took the fashion helm in 2016, sales have doubled between 2017 and 2020, according to Business of Fashion, and the brand planned to open 20 stores a year between 2017 and 2019.

Because of this, the brand aims to lean harder into the heritage of the design house, by highlighting Yves Saint Laurent — the designer — in 2019. Information about Saint Laurent, who died in 2008, will be shared frequently in pop-ups, and sales assistants will be provided further education about his biography. Even the marketing of specific products like YSL Beauty highlighter Touche Éclat, which launched in 1992, will play up the association with the designer. (It was inspired by the fact that the designer thought women looked best under the runway’s gold lights, said de Marffy.)

“Material things are material things, but what inspires you are experiences,” she said. “Most people don’t know Yves Saint Laurent [the man] — who he was or his contributions, and how his heritage informs who we are today. That’s the story we will tell a lot more of. It’s about striking the right balance between modernity and [heritage].”

Utilizing the fashion house’s brand halo and highlighting the cultural impact and personality of Saint Laurent, himself, is helping protect the beauty brand, as the luxury cosmetics market softens, said de Marffy. According to NPD Group, the U.S. prestige beauty industry reached nearly $18 billion in 2017, a 6 percent increase over 2016. However, the makeup category slowed, and skin care was the key driver. Though YSL Beauty sells skin care, fragrance and makeup, roughly 78 percent of its portfolio is makeup.

Leaning into the fashion house’s roots to break away from competition is a good strategy, according to Massimiliano Di Battista, co-founder and CEO of M+A Group, a creative agency for fashion talent.

“Fierce global competition means brands must define their unique selling points authentically. Brands can establish their voice by promoting moral values, superior technology, cultural themes, craftsmanship, cool or heritage, or all of the above,” he said. “YSL’s namesake truly personified its style and vision, and by leaning into this history, the beauty [brand] can bestow serious luxury onto an affordable and accessible product.”