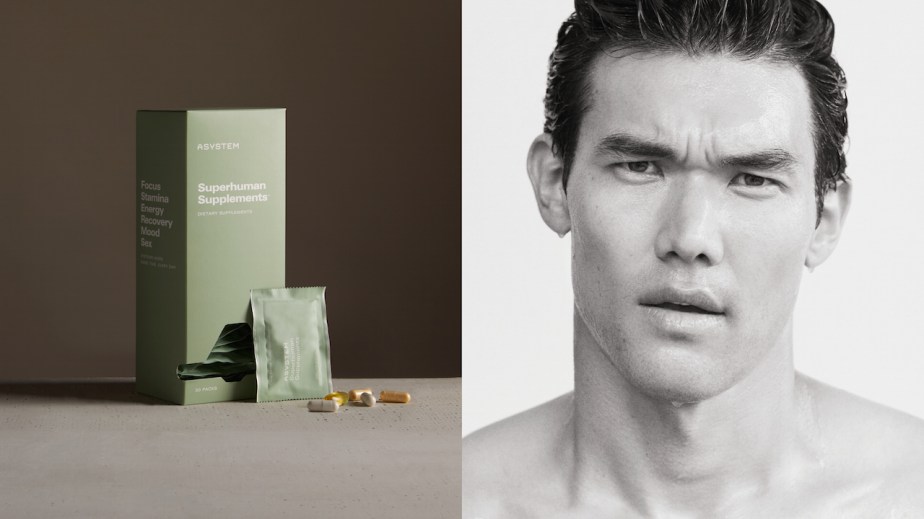 How the wellness industry markets to men

You’ve likely seen the ads. There’s a smiling, healthy-looking man with clear skin. There’s the man whose hair is being ruffled by the disembodied hands of a woman. There’s also sometimes a deflated cactus or wink-nudge image of an aphrodisiac oyster. The ad copy says things like “Look Better. Feel Better. Perform Better,” or promises to make men “the healthiest, happiest, most confident.”

These examples come from or exemplify a smattering of men’s wellness brands, like Hims and Keeps, that have cropped up 2017, alongside even newer digitally native doppelgängers like Manual (launched in January) and Numan (launched in February). On Tuesday, this grouping gained a new member through men’s wellness brand Asystem, which aims to create a sub-niche under the auspices of wellness called “Betterment,” which the company frames as an enlightened definition of wellness. It is just one of a handful of companies looking to make it big in the $1 trillion beauty-related wellness market.

Co-founded by Oli Walsh, the founder and CEO of Wednesday Agency, and Frame Denim founder Josh LeVine, Asystem is a subscription service offering skin care products and ingestibles. There is a three-step “Performance” skin-care regimen — involving a cleanser, moisturizer and “rebuilding” cream — for $45 a month, and a “Superhuman Supplement” pack of vitamins and nutrients to increase focus, energy and stamina for $75 a month. Together, both collections are labeled as the “Total Body System,” and are available for $99 a month. In addition to products, the brand also boasts an online blog with articles centered on nutrition, mind and body. It’s also produced “The Betterment Project,” a limited-edition coffee-table book that explores what motivates 48 male tastemakers and is meant to set the tone and express the vision of the brand, according to Walsh. Rounding out the brand is a 4,200-square-foot space called BeachHouse in Venice, Calif., designed to encourage offline conversations between men by hosting meet-ups and lectures around the mind and body.

“We want to create a place where people can be comfortable and share and be vulnerable,” said LeVine. “The true sense of modern masculinity is allowing yourself to be vulnerable. No one is perfect, which is a problem with social media; it’s all synthetic. In the past, people weren’t able to address [personal] things.”

All the aforementioned brands say they are demonstrating a new kind of soft-masculinity and moving away from antiquated stereotypes about what manhood means. Their ads commonly use humor and visual euphemisms to make subjects like hair loss less uncomfortable, compared to macho images from a decade ago that prized shirtless hunks and most-interesting-man personalities. Now, these brands say men can just be themselves. At the same time, all the products these male wellness brands sell specifically relate to self-improvement, putting into question how much these brands are progressing past decades-old stereotypes.

The emergence of male-specific wellness as we now know it stretches back at least a decade. With the launch (and subsequent $1 billion acquisition) of digitally-native subscription company Dollar Shave Club in 2011 coupled with relaxed telemedicine laws and expiring pharmaceutical patents, a new era of direct-to-consumerism was being born. And when Gwyneth Paltrow hit “send” on her first Goop newsletter in 2008, she began helping create a shift in wellness from being an earthy-crunchy niche concept to being a level of mainstream aspiration. Goop launched a men’s content vertical and podcast in May. Being interested in wellness no longer became an issue of preventing illness and protecting health, but a lifestyle predicated on the idea of personal optimization, physical performance (and appearance) and mental acuity through the use of creams, lotions and ingestible supplements.

“What you need in consumer markets is an identity of a target market that is in flux,” said Detlev Zwick, assistant professor in the department of marketing at the Schulich School of Business, at York University in Canada. “The worst kind of consumer market is the one that doesn’t want to change anymore.”

The new male wellness brands communicate that they are in the business of promoting and catering to men who have a desire to look after their appearance and wellbeing. But this new style of marketing has its critics, especially when deemed inauthentic. After all, the brands encourage men to challenge what modern manhood means while still selling products with the idea that flaws in men’s bodies still need to be fixed. In general, while the vast majority of marketers think they’re doing a good job of avoiding gender stereotypes in advertising (76% of female marketers and 88% of male marketers), almost half of consumers feel advertisers are still not getting it right, according to marketing consulting company Kantar.

“Marketers aren’t in the business of radical change,” said Zwick. “What they are interested in is making small differences that appear significant to create a proper positioning [for a brand] that appears interesting.”

But there is a new opportunity that presents itself for marketers as the wellness industry continues to mature and evolve, which would challenge existing stereotypes. That opportunity lies in unisex brand positioning, said Kate Ginsburg, vp of media and content marketing for Kantar. She said that while wellness brands are now recognizing that wellness applies to men beyond simply putting something in a grey bottle and labeling it “for men”, she cannot help but wonder when the unisex wellness category will take off. After all, compared to unisex brands, male-skewed brands are valued at $9 billion less, according to her research.

Unisex products are already gaining a foothold in traditional beauty, with new and heritage brands laying the foundation for the same shift to occur in wellness. Fanny Camus-Tournier, head of strategic planning for advertising and public relations firm Ogilvy, also expects unisex wellness to become the new norm for brands and their marketing, and there’s already an inkling of this to come. Ingestible-wellness brand Four Sigmatic, which launched in 2012 and markets to both men and women, earned $61.7 million in 2018, according to industry sources, while fellow unisex ingestible wellness brand The Nue Co. raised a $9 million in Series A funding in June.

“The brands that don’t try to sell a new morality or a new way to live will be the winners in the end,” said Camus-Tournier. “Happiness is not a question of gender, and the more we progress, the less difference there will be between male and female wellness.”