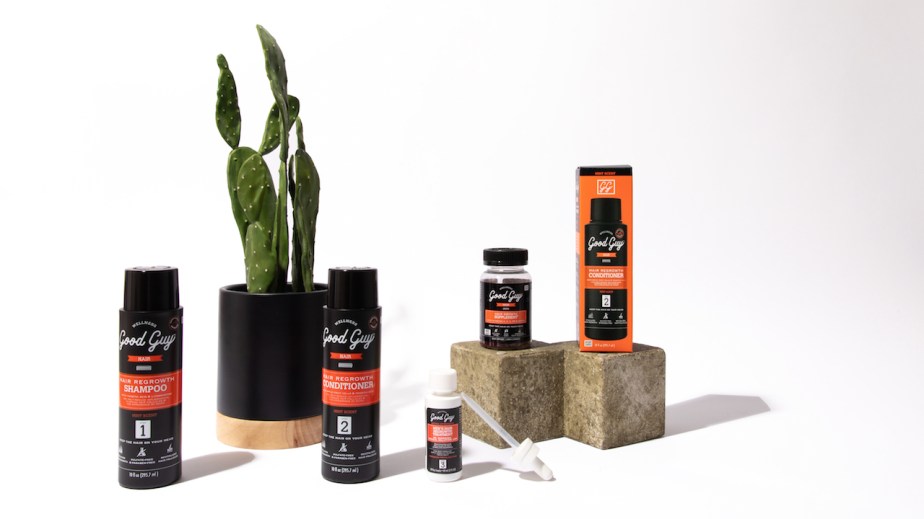 How digitally native brands are transforming the hair-loss category

Digitally native brands are typically intent on disrupting something. Lately, many are eying the hair-loss category.

The active ingredient behind Rogaine, minoxidil, was first discovered in the 1960s, and the hair-loss drug Propecia debuted in 1997. Now, Hims, Keeps, Roman and Good Guy are taking a Silicon Valley approach to the category by offering cheaper generics, in addition to DTC business models and an Instagrammable approach to branding.

Rogaine’s sales never entirely took off — annual revenue was only $31 million in 2006, a decline of 34% from 2002 the year Pfizer sold the brand to Johnson & Johnson. For its part, Propecia reached $124 million in 2012, but two years later after its patent expired, it dropped to just $19 million, according to Bloomberg.

Hims, Keeps, Roman and Good Guy are hoping they can reinvigorate the hair-loss category by upending the conversation and marketing to younger men. In the U.S., by age of 35, 66% of men will experience some degree of “appreciable” hair loss, and by 50 years old, approximately 85% of men have significantly thinning hair, according to the American Hair Loss Association.

Hims is out to talk about a hair loss through a lifestyle approach, while Keeps and Roman are taking a more clinical and authoritative approach.

Emotional connection
A photo of a stoic man having his hair shampooed by disembodied hands. Another photo of a man with a lush head of hair that is bring pulled. These are common visuals shown in Hims’ marketing — its branding was developed by creative agency Gin Lane, which has worked with a range of DTC brands including Harry’s. Hims, which launched in November 2017 and pulled in $1 million in revenue in its first week is reportedly now valued at over $1 billion. Hims aims to keep the conversation light in its marketing materials, with ad copy like, “Prevention. More effective than denial.”

Humor has also been a point for Roman since it launched as a telemedicine company for erectile dysfunction in November 2017, before expanding to hair loss in October 2018. The brand has focused on sharing funny content on Facebook (where it has over 28,000 likes), typically in the form of videos and articles. One example is a video compilation of “awkward ED” commercials from the past 20 years that has over 1.3 million views and over 7,000 likes and comments. But there are also lighthearted expressions of genuine emotions, such as a post from May 6 featuring a quote from a Roman customer. The brand accompanied the post with the comment, “Roman is about relationships. And yes, we ugly cried when this one came through.”

“The key has been to emphasize that these challenges are extremely common and that there are effective treatments available,” said  Zachariah Reitano, Roman CEO and cofounder. “The most important thing is to make sure that people don’t feel compelled to take medication or that losing their hair is inherently a bad thing. We don’t care if you’re losing your hair. If it’s interfering with your life, that’s when we care.”

Both brands are clear about its intention to de-stigmatize the conversation around hair loss, and the same goes for others in the space. Brandable-owned Good Guy, which launched in January, for example, is focused on building up the confidence of its customers, said Christian Patino, Brandable evp of marketing.

“The way we see confidence is two ways: the first is making sure we deliver our promise of products that will bring back your hair,” he said. “The second that when we say ‘confidence,’ the last thing we want consumers worrying about is their hair. We’ll take care of that so they can focus on what truly matters to them.”

For Keeps, which launched in January 2018, it eschews the relatable lifestyle-brand approach and instead focuses on building trust through a more clinical approach. Its emotional connection it’s attempting to build is a peace of mind. Steve Gutentag, Keeps cofounder, is particularly cautious of overstating the brand’s role in de-stigmatizing the conversation around hair loss. Instead, he credits the general trend of men wanting to take care of themselves, and feel they are allowed to care about their appearance and general wellbeing.

“We have made it an approachable conversation, but I don’t want to say that in a year, we have made it perfect,” he said. “It’s important that if hair loss is an issue, it’s not something that defines your life.”

Content and Education
In order to create an emotional connection with customers, there needs to be something for them to relate to. And digitally-native startups have been successful in using content for educational purposes.

Before Hims launched its e-commerce platform, it spent eight months building up blog content — its blog is called Savoir Faire and features topics like meditation, anxiety, alcoholism, sexual performance and aging, said Andrew Dudum, CEO of Hims. Over time, these digitally-native brands have gravitated offline and into people’s commutes and on their televisions. Hims has notably been found on public subway advertisements, as well as television commercials. Keeps started advertising on TV two months after launch; it has increased its monthly TV ad budget ten-fold since then, Gutentag said.

On May 6, Good Guy launched a podcast called Good AF, which features men like JP Iberti, the founder of coffee chain La Colombe Coffee, and Paul De Gelder, a shark attack survivor and host of the Discovery Channel’s “Shark Week” program. Each conversation is focused on these men’s personal struggles, and what and how they gained their confidence back.

“We believe that the podcast is a way to connect with millennials and bring our brand equity to life,” said Patino. “In order to be relevant, you need to do more than product placement. If you start with content first and people find it relevant, you have a higher probability of success; they will try your products because they already have an emotional connection.”

This approach to making men’s hair loss palatable has been applied to other seemingly embarrassing categories successfully, as well, such as sexual dysfunction.

“Brands are creating a certain level of expertise [in a category] and demonstrating that,” said Brady Donnelly, executive director of consumer experience at creative agency FIG. “They’re focused on education and that they know what customers need [to solve a problem]. It’s very light-touch and easy to make use of. They’re ultimately tech and marketing companies because the product themselves already exist.”