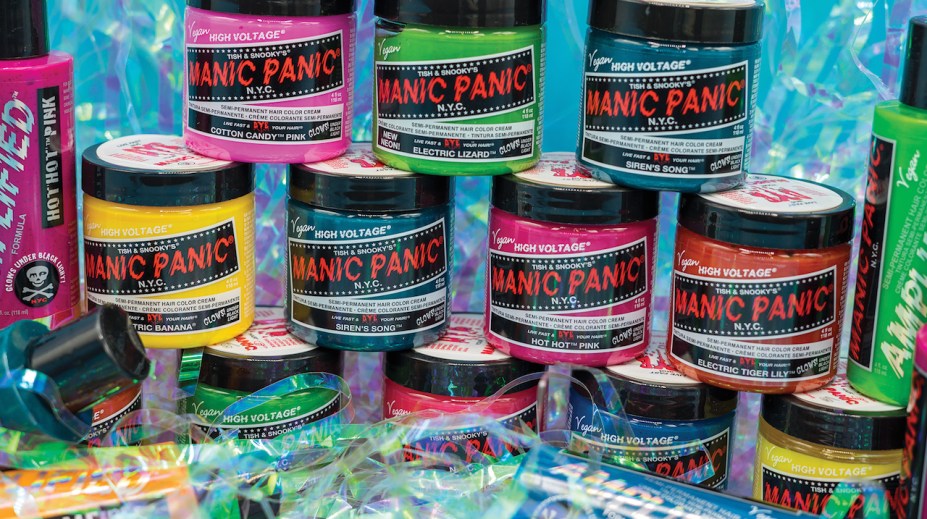 Forty-year-old, hair-dye brand Manic Panic is competing with younger brands in an unusual way: It is turning back the clock.

On Wednesday, the brand launched its first-ever hair-care products (two shampoos and a conditioner) online at ManicPanic.com. By the end of January, Manic Panic will also expand into wigs, and in the second quarter, it will venture into hair tools. The company introduced brand-inspired phone cases in October 2019. All of these new merchandise plays are to affiliate the brand with a lifestyle point of view, a tenet that Tish Bellomo, Manic Panic co-founder, said is in the brand’s DNA.

“A lot of people don’t know the rich history of the company. They don’t know our background with the punk scene and that we are an independent brand,” said Bellomo, who started the company with her sister Eileen “Snooky” Bellomo in 1977. At the time, Manic Panic was a store in the East Village selling hair dye, clothing, records and other punk-era accessories.

Though the East Village location closed in 1989 and the company pivoted to selling only hair dye through wholesale at the time, Manic Panic sees that today makeup and household brands, alike, need a lifestyle proposition.

Manic Panic sells in 42 countries through retailers like Ulta, CVS and Hot Topic, but it’s faced challenges as bold hair color, which the brand was once known for, has become mainstream. Moreover, digital-first brands like Good Dye Young, Pulp Riot and Lime Crime have created increased competition for the incumbent. By developing a lifestyle, Manic Panic can not only bolster sales but it can also solidify the strength of its brand name.The co-founders declined to cite sales figures but said the company’s sales grew 15% year over year in 2019.

“If people see Manic Panic everything and everywhere, they’ll hopefully see that it’s a whole brand and lifestyle,” said Snooky Bellomo. “We are trying to get the history out there now because a lot of people don’t know it, and it’s the only brand that has this [kind of] history.”

Whether these efforts will succeed remains to be seen. Because Manic Panic predates social media, it is also playing catch-up to compete against newcomers, which Snooky Bellomo acknowledged has been difficult. Manic Panic currently has 375,000 Instagram followers; comparatively, Pulp Riot (founded in 2016 and acquired by L’Oréal in May 2018) has 895,000 Instagram followers and Good Dye Young, which also launched four years ago, has over 200,000 followers. Lime Crime, which spans makeup and hair, has over 3.5 million followers. Plans to promote Manic Panic’s hair care and wigs are still in the works, but the co-founders said they rarely rely on paid influencers due to budgetary constraints and concerns over authenticity.

“We weren’t born into social media to get that word out, so it’s still fairly new to us,” said Snooky Bellomo.