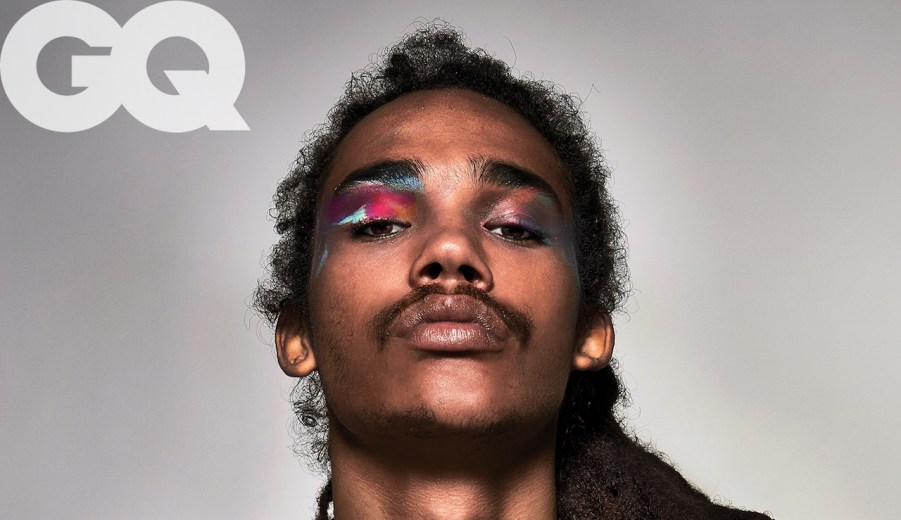 GQ’s ‘new masculinity’ approach extends to makeup and beyond

The concept of male beauty is beginning to go mainstream.

In the November issue of GQ, the Condé Nast-owned title put color cosmetics and skin care front and center. Take “The Glorious Now of Men in Makeup” feature: It shows seven actors, influencers and musicians, including model-actor Luka Sabbat and Billy Idol, in makeup, accompanied by their personal beauty tips. Elsewhere in the issue, E.J. Johnson, Magic Johnson’s son, discusses how he expresses himself with cosmetics and female clothing.

“There has just been a conversation around toxic masculinity and gender, and it became increasingly important to me to say something. The new masculinity is about knowing who you are and feeling free to express that,” said Will Welch, GQ editor-in-chief. “That has all kinds of implications for fashion and style, but also beauty and grooming, ”

Since Welch took the reins at GQ in January, its magazine and digital properties have become more progressive, and younger readers are responding to its inclusive positioning. Though GQ’s median age is 38 years old, readers 21 to 34 have increased 16% year over year, and digital subscriptions have increased 55% among this age set, according to August Comscore data.

GQ’s timing is apt, as the male shopper has become increasingly willing to spend more on beauty and grooming. According to market research firm Euromonitor International, the $8.9 billion U.S. men’s grooming market is forecast to grow by over 7% by 2023, to $9.5 billion, and the hair-care segment is set to increase by 17% to $904 million.

GQ’s audience is also spending more time with grooming content. Though beauty and grooming coverage has only seen a 3% year-over-year traffic increase, readers have spent 43% more time with these kind of stories in 2019 versus 2018. Additionally, grooming stories published on GQ.com in 2019 have generated 42% more unique visitors year over year.

“Anything that is an opportunity for the readership of GQ is an opportunity for marketers,” said Susan Plagemann, Condé Nast style collection chief business officer. Plagemann said, across segments, GQ has seen yearly advertising revenue increase, especially for the automobile and home categories, which saw spikes of 30% and 220%, respectively.

Beauty and grooming has not seen those lifts yet, but Plagemann expects it to be a slower build, given the nuance of men’s marketing for grooming. “Our go-to market strategy here was, ‘How to be a man post-#MeToo,’ not ‘Hey! Grooming,'” she said.

However, the success of GQ’s Best Stuff box, which launched in January 2018, might make that transition easier. A mixture of grooming, fashion and accessory products, GQ’s quarterly subscription box is a take on the Allure Beauty Box. The latter has been seen as a significant revenue driver for Condé Nast, despite the company’s recent losses and plans to put content behind a subscription pay wall.  GQ reported that it sold out of its last two boxes and year-over-year member growth is more than 250%. Revenue has also doubled. Plagemann said she hopes to expand and amplify the Best Stuff offering within the next three years, and Welch said the title is also considering merchandise.

Beyond heritage men’s brands with marketing dollars to spend, placement in GQ’s Best Stuff box is also important for digital upstarts. Accessible grooming company Huron is featured in the latest box and sees it as a key offline marketing tool, considering how expensive customer acquisition is online.

“The GQ opportunity is a way to explore an offline brand awareness campaign. The timing of the Best Stuff holiday box lends itself well to gifting and inherent consumer intrigue around brand discovery,” said Huron founder and CEO Matt Mullenax. “The GQ audience enjoys engaging with new brands and leverages the GQ endorsement as a brand vetting mechanism.”

Skin-care brand Koa, which sells a line of tinted SPF products and moisturizers, will be featured in the February box. It had to provide roughly 16,000 of its full-size cleanser products for placement; GQ would not disclose if this was the number of its total subscriber list. Koa, Huron and Condé Nast did also not state the financial terms of the Best Stuff boxes.

“We started out spending 90% of our marketing dollars on Facebook and Instagram, but have diversified our ad spend away from these platforms,” said Hiro Shinn, Koa co-founder. “They’re just too expensive. Big companies plow capital into Facebook and Instagram, which drives up costs, and that gives us an opportunity to look for advertising opportunities where they can’t and are not willing to.” Shinn saw significant parallels with Koa’s customer base and GQ’s readership. Its two biggest buckets of customers are 18 to 25 years old, and those that are 40-plus.

Despite Koa’s push into men’s makeup and GQ’s, the title selected to feature the brand’s cleanser, as it is more of a bridge product instead of its Tinted Anti-Pollution SPF. However, the tinted product outsells its clear counterpart by 40%, and Koa has plans to produce and sell six additional shades.

While there are indie competitors in publishing like a Very Good Light that have spoken to the trend of male beauty and grooming, according to data provided by GQ, its readers are 200% more likely to spend $500 or more on grooming and beauty products, and spend $2.2 billion on grooming annually. This presents a ripe opportunity for GQ, when more traditional men’s titles like Esquire have not fared as well, from both a culture conversation perspective and a revenue point of view.

“We’ve seen really quick growth among our younger audience, and we think the future is bright for GQ,” said Welch.