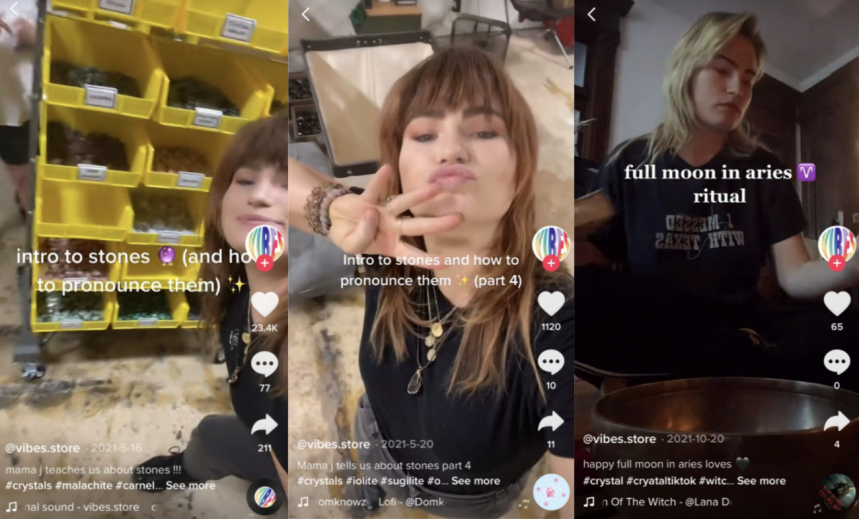 Regardless of what you think of crystals, Kathryn Gallagher can make you a believer. The 28-year-old is best known for her Tony-nominated role as Bella Fox in the Broadway musical “Jagged Little Pill.” Gallagher has also appeared in the “Gossip Girl” reboot and “You.” She’s also the daughter of actor Peter Gallagher (aka Sandy Cohen to millennials). Adding to her multi-hyphenate status is her role as a co-founder of Vibes Metaphysical Supply Store, an online crystal store — and she credits #WitchTok as a catalyst for the creation of the business.

For those who don’t know WitchTok, it’s a wellness-y, woo-woo corner of the internet. “It’s a magical place,” Gallagher said. “My introduction to WitchTok was basically when you see one video on the algorithm, and then suddenly you see 27. I started seeing all these people hysterically crying, like, ‘I just got a piece of moldavite, and now my boyfriend broke up with me,’ or ‘I got into a car accident,’ or ‘I found out my best friend was sleeping with my boyfriend.’ People were like, ‘If you’re not ready to have your life entirely changed, do not get moldavite.'” Naturally, Gallagher’s curiosity was piqued.

She reached out to a crystals expert, Julie Rieger, and eventually, Vibes was born. Before the TikTok-inspired venture began, Gallagher only knew that “rose quartz was good for your heart.” Now, she said, she has crystals all over her Manhattan apartment.

“It was about two weeks after that initial conversation that [Rieger] came to me with the idea [for Vibes]. She started sending [me] these stones and asking, ‘What do you feel about this one?’ And, ‘What do you like about this one?’ There were around three months of that, where we had weekly calls. It really started picking up speed in March of 2021. And then we launched in May,” Gallagher said.

Gallagher is not the only celebrity to dabble in the crystal space — Spencer Pratt has a crystal company called Pratt Daddy Crystals.

#WitchTok is far less niche than most would guess. The hashtag has 24.8 billion views on TikTok. When asked why crystals and other witchy topics might be resonating so strongly with a younger audience, Gallagher pointed to the world Gen Z and millennials have grown up in. “I’m 28. And in my lifetime, we’ve had a massive terrorist attack, we’ve had a global pandemic, [and] we’ve had a recession. We’ve [also] had the massive explosion of social media, of which we really cannot underestimate the impact, in terms of the way we [now] view ourselves. When I was 10, girls who were a size six were being put on the cover of a magazine for being ‘disgusting’ and ‘ugly,'” Gallagher said, pointing to the more inclusive culture of today.

Millennials didn’t grow up native to social media in the same way Gen Zers did, Gallagher said. And the difference now, she said, is that Gen Z can identify as anxious or depressed.

On Vibes’s social media (it has 3,000 f0llowers on Instagram), Gallagher personally helps customers find the crystals that are the best fit for whatever it is they’re going through. “We ask, ‘What do you need help with?’ ‘What vibe are you lacking?’ ‘What do you need?’ So many of the answers are: anxiety, depression, grounding,” she said. Gallagher also posts about and links to Vibes from her own Instagram (148,000 followers) and TikTok (103,000 followers) accounts.

Crystals, Gallagher hopes, are one small thing that may provide a sense of comfort. “There have been so many events to want to numb yourself to and just step away from. So this explosion of crystals and spirituality and meditation is just one simple tool to simplify everything,” she said. “[Crystals are just] these things that you can hold in your hand and be reminded that, ‘OK, we’re all from this planet that we’re destroying at a rapid pace, which is devastating. They’re these reminders that the world history is long, and these rocks were here long before we were, and hopefully will be here long after. They’re a reminder to stay present, and stay grounded and connected to some sense of reality and raw truth.”