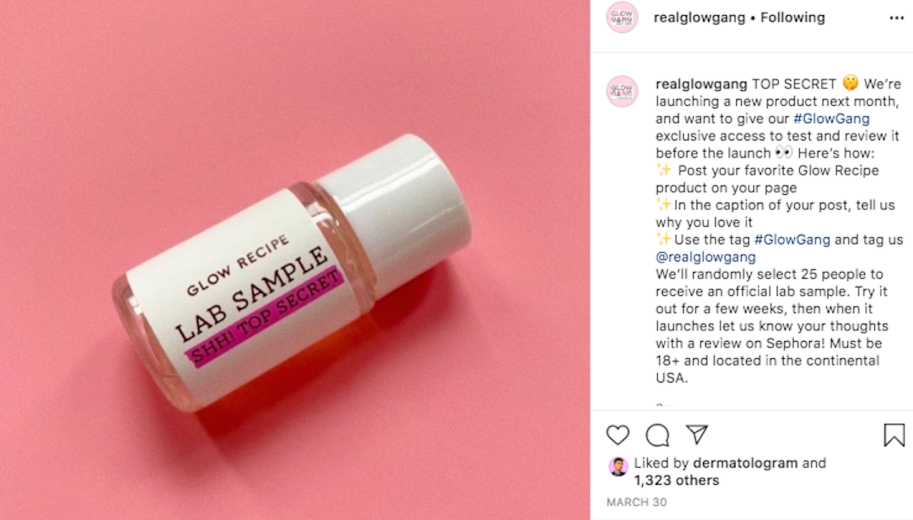 Glow Recipe is returning to its online roots by focusing on e-commerce activations and engagement.

On Friday, Glow Recipe launched its first toner product on GlowRecipe.com and Sephora.com. The brand used the opportunity to test out its first digital sampling program while tapping into a newly-created, private community on Instagram called Glow Gang.

Glow Recipe first launched in 2014 as a K-beauty marketplace for third-party brands before introducing its own products with a Sephora-exclusive partnership in 2017. It transitioned into a standalone brand in July 2019. Glow Recipe hit $30 million in retail sales in 2018, but with Sephora doors temporarily closed, and over 50% of the brand’s sales coming from Sephora, Glow Recipe is back in a familiar position of needing to rely solely on e-commerce.

There are currently almost 10,000 Glow Gang followers and over 100 community managers who are unpaid micro- and macro-influencers that produce Instagram content for the private account. Glow Recipe sent 10-milliliter lab samples to the community managers ahead of the launch. Separately, the company sent samples beginning on April 13 to its e-commerce customers and people who signed up to receive them through a March Facebook ad. Altogether, Glow Recipe sent out 600 samples, and recipients were directed to provide reviews and testimonials on GlowRecipe.com. Another 2,500 miniature versions of the toner will be sent to users of social networking site Influenster beginning April 20, through a paid partnership with the platform. Influenster users complete a market-research survey after they use a product, and leave a review on the Influenster website. Glow Recipe does not control who receives the products.

To additionally support the launch, GlowRecipe.com began on April 7 to offer live video consultations with the retail field team on Zoom to chat with customers about what products are best for them. with customers on its website on April 7. Customers who purchase the toner within the first 48 hours of launch will receive exclusive access to a Zoom webinar about K-beauty skin care hosted by brand founders Sarah Lee and Christine Chang on April 24. And influencer aesthetician Jade Marie (@jadeywadey180; 1.2 million Instagram followers) will host an Instagram Live masterclass featuring the toner via the brand’s account on Friday.

Glow Recipe’s private Glow Gang Instagram account is a growing focus for the brand as it differs significantly from its public, branded one. The public account frequently features carefully crafted product shots and beauty tutorials, while the private account is filled with user-generated content, internet jokes and memes. Anyone can join, but everyone has to request to follow the account.

Building a private social community is not an unusual move for a brand, but they typically host them on Facebook. Versed, Glossier and Curology all have private Facebook groups. Glow Recipe opted for Instagram because the majority of its customers are on Instagram.

“The premise of the private account is conversation-first,” said Chang. “Sarah and I read and write comments personally, along with the Glow Gang community managers. We’ll also ask questions that are a little bit more fun and light-hearted. This is the type of conversation that committed customers are looking for.”

Lee said that over the last four weeks, the brand has seen a “huge” increase in the brand’s DTC e-commerce sales, as the website absorbs customers who could have shopped through Sephora in-stores, although she declined to cite specifics. The brand continues to focus on its Sephora business; the two companies are working together on social media and digital campaigns for the launch. Since March? Sephora has introduced new content initiatives, such as “Spill the Tea” on Instagram Live. On April 21, Lee will be featured talking about the new toner launch and sharing self-care tips to practice at home.