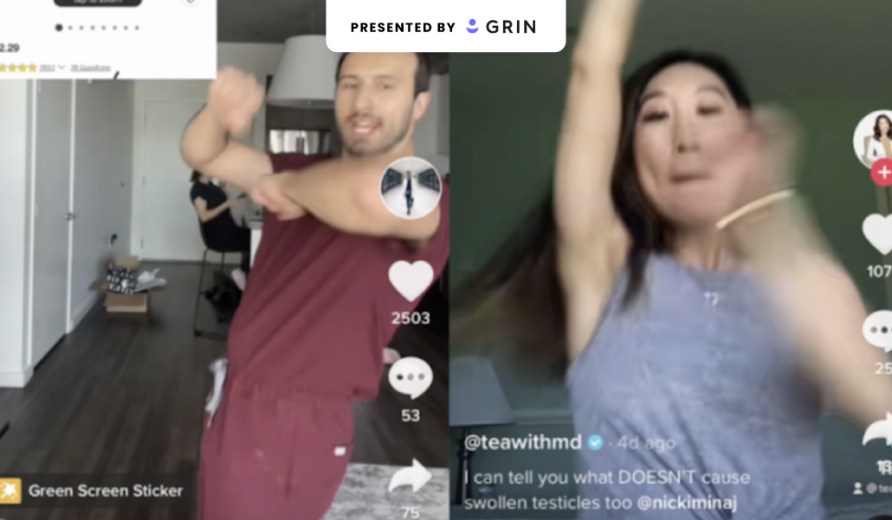 Glossy Pop Newsletter: Why are dermatologists dancing on social media?

Perhaps it’s pandemic boredom, too much free time, a genuine need to build one’s practice or the pressure that exists in 2021 to “build a personal brand.” Or, if you’re more cynical, it could be clout-chasing. But, in case you haven’t noticed, dermatologists have taken to dancing on social media. And among the dermatological community, there are very different opinions on what to make of both the dancing and the expanded use of social media as a career tool in general.

Chris Tomassian, dermatology chief resident, will turn 27 in a few weeks. Over the course of the past year-and-a-half, he became a TikTok star with 1.3 million followers. Tomassian’s age puts him right between the youngest millennials and oldest Gen Zers, which perhaps gave him an edge in adopting social media. In his most recent video, he dances to a remix of Avici’s “Levels” while screenshots display his favorite skin-care products under $15.

“In dermatology, when everything shut down, we switched to televisits, so these are a lot of the questions I was hearing from patients over the phone. I was like, ‘You know, let me just make quick videos that are somewhat entertaining and give the answers,” Tomassian said. He aims to cover topics that are relevant to wide swaths of people. His follower demographic is younger — in their teens and early 20s. “The attention span of people that age is very, very short. I’m trying to get out a lot of knowledge in 10-15 seconds. And then, I throw some dancing in there to make it fun,” Tomassian said. For him, dancing is preferable. “I always found just regurgitating medical knowledge over a camera to be awkward and boring.”

A positive side effect of his popularity: His followers now want to be his patients, he said. And even if they didn’t, 1.3 million followers on the social media platform of the moment brings its own slate of opportunities.

It’s a choice not every dermatologist wants to make or feels good about. Simply put, “I think it takes skill to dance. I do,” said dermatologist Dr. Josh Zeichner. Dr. Zeichner has an active TikTok account where he delivers easy-to-understand skin-care intel while speaking to the camera, with a close view of his face. “But it opens you up, it makes you vulnerable in some ways. And you have to pick and choose what side of yourself you want to show on social media.” He cites his colleague Dr. Shereene Idriss (@shereeneidriss) as an example of another creative approach to social media. Dr. Idriss has become known for a series called #Pillowtalkderm, in which she speaks to the camera or to other members of the beauty industry from her bed. She has 360,000 followers on Instagram.

Facial plastic surgeon and founder of Aedit, an online platform for aesthetics education, Dr. William Kennedy does not dance on social media, but acknowledges that using social platforms is the product of necessarily adjusting to the times. “If you don’t adapt, you’re going to be a Tower Records or a Blockbuster. You won’t have as many followers, and people won’t know about you,” he said. After all, “if you’re not using the most effective marketing tools, you’re probably not up to date with the most effective medical procedures. You want to be associated with having the most up-to-date technology, both in terms of marketing and in terms of your office and the medical procedures that you do.”

Of course, there’s the question of the impact of said marketing. “Someone might get tons of views or likes on a post, or gain a following…but there’s going to be a limit on how outrageous you can be before it’s detrimental,” he said.

Dermatologist Dr. Rohit Kakar is not a fan of the dancing and takes a different, humorous approach to expressing his views: meme-ing. His posts speak for themselves.

In conversation, however, he speaks about the social media trend seriously: “Dermatologists have not always been taken seriously within the field of medicine, despite our work on melanoma and skin cancer… When you’re portraying our field — and any dermatologist is a representation of our field — it doesn’t put us in the best light when you’re dancing and doing these things. And so it sort of diminishes our respect and our integrity,” he said. “I don’t say that with malice toward any of the doctors doing this. Some of them are my friends. And for some of them, it has helped their careers.”

Kakar called himself “an older millennial,” and said the difference in opinions on dancing dermatologists may come down to generational differences.

In Dr. Tomassian’s own family, this rings true. “When I first started making these videos, my parents watched them. And my dad was like, ‘What are you doing? This is not professional.’ My dad’s an old-school doc [in family medicine]. And I was like, ‘Dad, just listen to me. Social media is different. People want to watch these things. This is how they’re learning nowadays.’… It was initially kind of tough, thinking, ‘Am I doing the right thing or not?’ And then you get on the platform, you read the messages of, ‘You cured my acne,’ and ‘You’ve helped me so much.’ And then you’re like, ‘If I get made fun of a little bit for dancing and making a fool of myself, and I’m helping someone along the way, there’s there’s really no loss in that.’”

When you think of iconic beauty products, MAC’s Ruby Woo lipstick, with its universally flattering red shade, no doubt comes to mind. The brand sells four tubes per minute. Famous fans include Taylor Swift, Rihanna, Saweetie and Rosalia, to name a few. So if anything, it’s surprising that the brand is only now introducing the color in additional formats and finishes, launched September 23. That includes two bullet lipsticks and two liquid, brush-on paints. Shop the original, $19 shade here.

Fans of the now-shuttered Becca Cosmetics will be delighted to know that Smashbox is “adopting” two of the defunct brand’s most beloved formulas: the Under Eye Brightening Correcter, a dark circle-brightening, cream-based product available in three shades, and its hero, the Shimmering Skin Perfector Pressed Highlighter in Champagne Pop. The products have a new “Smashbox ❤ Becca” logo, and Smashbox plans to keep them as part of its permanent collection.

Trend of the week

Mansur Gavriel has recently launched a number of new bags. The newest, its Scrunchie Bag ($595), is the latest in a series of fashions inspired by one iconic French pastry: the croissant. On TikTok, a number of more affordable, trend-forward brands have had success with similarly shaped purses. One popular example: JW Pei’s Gabbi Bag ($89), which Gigi Hadid has carried. On Instagram, #croissantbag has been tagged about 3,000 times, and that number is growing as the trend becomes ubiquitous. And bags aren’t the only accessory getting the pastry treatment. At direct-to-consumer jewelry brand Mejuri, the Croissant Dôme Hoops ($75) are a best-seller. And for anyone wanting to top their head with a pastry-esque adornment, there’s Lelet NY’s splurge-y Croissant Headband ($168).

IG of the week

A post shared by e.l.f. Cosmetics and Skincare (@elfcosmetics)

E.l.f. made its debut on Jeopardy this week when contestant Matt Amodio incorrectly guessed that the makeup brand’s acronym stood for “ears lips face.” To soften the blow, the social-savvy brand is giving him an $8,000 credit to shop its site.

Why every brand is launching sensitive skin products

Hairfluencers are driving a rice water craze on Reels and TikTok

Kourtney Kardashian and Megan Fox Are Just Leaning Into It, Huh?