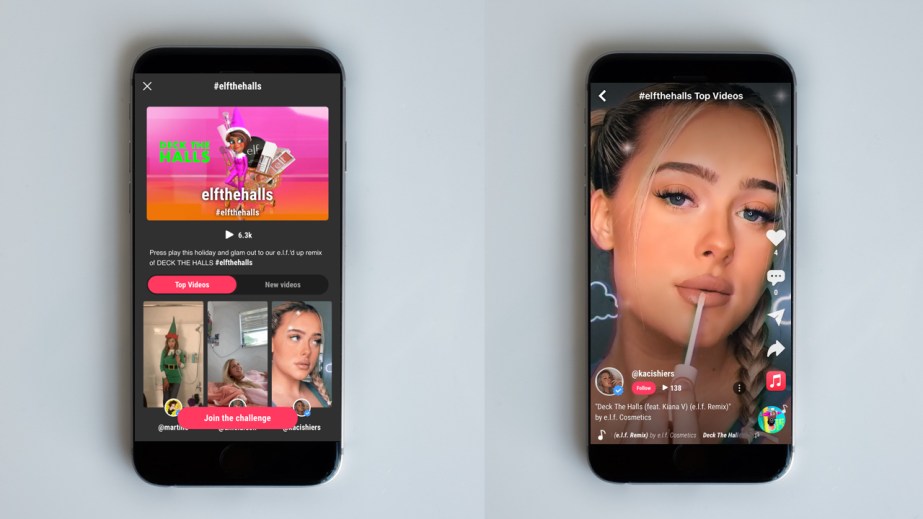 First TikTok, then Triller: E.l.f. Cosmetics is doubling down on short-form video.

The makeup brand launched its “E.l.f. the Hauls” campaign on Triller on December 4, continuing its strategy of using original music and influencers to reach a Gen-Z audience. The music-focused holiday campaign will extend across Triller and other social media platforms including TikTok, YouTube, Instagram, Spotify and Apple Music, with unique content on each platform.

“E.l.f. was born to disrupt, and E.l.f. has a built-in renegade badass spirit in our veins,” said Kory Marchisotto, E.l.f CMO. “We are always on the lookout for emerging platforms and new audiences to engage. Triller has been on our radar.” She said when the brand met with Triller several months ago, “We sat around and recognized that we were sitting across the table from like-minded, like-spirited disruptors.”

E.l.f was the first beauty brand to launch a sponsored challenge on Triller. NYX Cosmetics launched a campaign on the app this week, creating an AR lens through Snapchat’s camera kit that debuted on Triller on December 9.

For the campaign, the brand enlisted agency Movers + Shakers — which created its hit “Eyes Lips Face” TikTok campaign that received over 5 billion views — to record a holiday album with updated remixes to holiday songs. The brand featured up-and-coming musical artists including Halston Dare, Yasmeen, Kiana V and Rosette singing new versions of songs like “Jingle Bells” and “Deck the Halls.”

“What’s important for us is reaching new audiences in new and engaging ways. It’s very important to adapt to the relevancy of each platform,” said Marchisotto.

The beauty brand has become a success story with short video as its “Eyes, Lips, Face” campaign was one of the most successful brand campaigns on TikTok to date. Its success on TikTok was one factor that propelled it to become the No. 2 favorite cosmetics brand of Gen Z this year, according to Piper Sandler.

On the same topic — listen to the Glossy Beauty Podcast!

On Triller, the brand is running a sponsored hashtag campaign with mini music videos for each song, and it’s enlisting influencers including Loren Gray, Michael Le and the Bad Wiggies to star in the videos. So far, engagement has remained limited on the up-and-coming platform: Aniela Leon, who has over 941,000 followers on TikTok, has only 856 on her Triller account and has received only around 200 views on the E.l.f. Triller campaign video, as of Wednesday. Loren Gray has 324,000 followers on Triller and 50 million on TikTok. Triller has announced the goal of reaching 250 million monthly active users in 2021, and has been eagerly pitching advertisers amid news of the potential TikTok ban.

Although Triller and TikTok are both short video apps, Marchisotto noted, “They’re very different platforms. Where they differ is how they engage their audiences and what their audiences crave on the platform. When you think specifically about Triller, it was started by the music community with the music industry. And that’s really a key component of what people are doing there on the platform.” Triller has also bet on live events, hosting a widely publicized fight between Mike Tyson and Roy Jones Jr. on November 28.

Marchisotto emphasized the importance of becoming an early adopter of rising platforms.

“When we entered into the world of TikTok, people were asking us, ‘What is TikTok? We were definitely an early beauty brand,” she said. “I would say we’re even earlier here.”