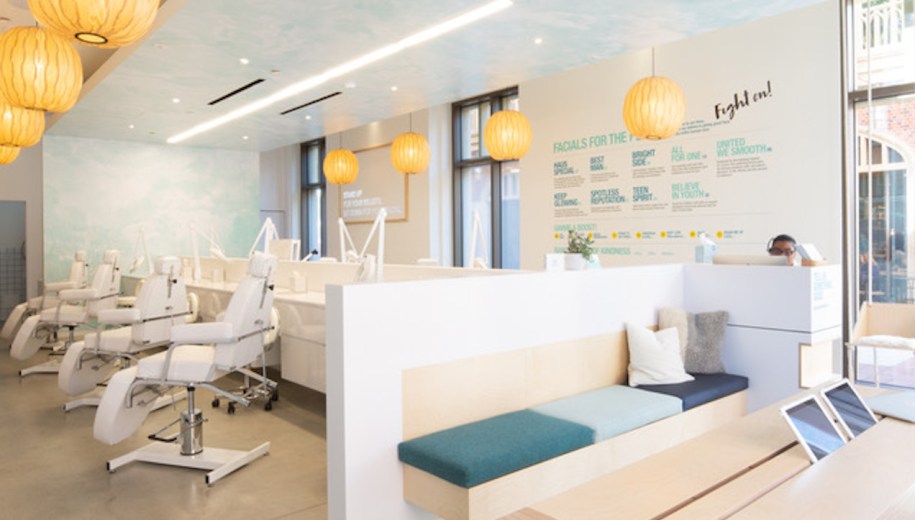 Face Haus is getting a jump on the growing facial-spa market.

The facial-only spa, founded in 2013, relaunched its website on March 7, and later this month, it will set up shop for the first time beyond Los Angeles: in Dallas and New York City.

A key result of the site relaunch is that there’s now more emphasis on Face Haus aestheticians, as the company works to further integrate employees into its marketing across channels. Visitors can choose the “(B)esthies” category from the site menu to be directed to a page featuring aestheticians’ biographies and photos, which can be filtered by location. There’s also a ticker tape-style display of employee photos at the bottom of the homepage, currently featuring those set to work at the new locations.

“As the brand has grown — we’ve gone from 13 employees to over 100 — our story has grown,” said Jenn Worley, co-founder and chief creative officer of Face Haus, who declined to share the company’s revenue figures. “It became clear that we needed to update the website.”

Beyond the website, aestheticians are also featured in “arriving soon” posters set up at upcoming store locations — there will be seven Face Haus spas by April, up from five as of early March. The idea is to “introduce” Face Haus and the people who comprise it, according to Worley, so that the brand feels more familiar to people by the time they open up.

Additionally, the new store sites also feature mirrors, meant to encourage selfies by passersby. They can tag photos with #FaceHausDallas or #FaceHausNYC to enter to win a year’s worth of free facials.

The brand is focused on differentiating in the increasingly crowded facial spa space, which now includes Chillhouse (launched 2017), Heyday (opened in 2015) and international entrants like Facegym (launched in 2016). However, some of its features mirror that of its competitors.

To foster connections between customers and aestheticians, it does not separate its salon chairs with walls — FaceGym takes the same approach. It also wants to serve as a laid-back gathering place, like cafe and spa Chillhouse, so it features a community table in place of chairs in its waiting area. Finally, it wants to be more wallet-friendly than the typical spa, where facials often exceed $100 — Face Haus services range from $65 to $145. And, like Heyday, it only focuses on facials.

“Our vision [in 2013] was to give people who aren’t traditional spa-goers a place to feel comfortable — and like they can afford it,” said Worley.

To emphasize a welcoming atmosphere (the company’s tagline is “Facials for the people”), all Face Haus locations are designed to be unisex (30 percent of the company’s clientele is men) and accommodate groups. There are facials designed for children and teenagers.

An aim to build connections with consumers speaks to the modern values of today’s shopper. According to Harvard Business Review, customers who have developed a bond with businesses are over 50 percent more valuable, on average, than the highly satisfied customer.

To promote the new store locations, Face Haus is also working with local influencers in its three markets on an unpaid basis. (They offer influencers a free facial in exchange for posting about the company.) In addition, it’s partnering with local businesses, such as yoga studios, to offer customers free facials during opening week at the new locations.