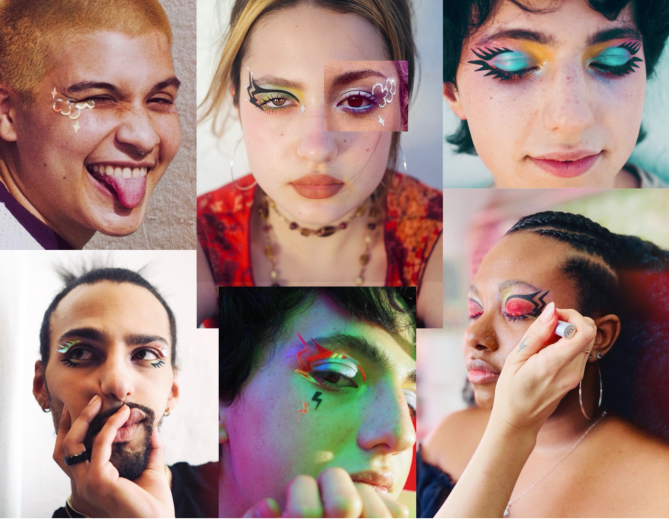 Donni Davy, “Euphoria’s” makeup designer and the woman behind all those copied, experimental, colorful eyeshadow looks is 32-years-old. But many of her legions of fans are young Gen-Z beauty lovers on TikTok and Instagram. On the latter, there are 296,000 posts using the hashtag #euphoriamakeup.

Davy went to school at Pratt Institute, where she studied photography. She discovered film and television makeup artistry when she was looking for a career that was creative, even if not in the traditional sense of having work hung in a gallery. A string of gigs led Davy to “Euphoria,” where her whimsical creativity with color and shape made makeup as much a star of the show as Zendaya and Hunter Schafer. Needless to say, Davy’s work has become emblematic of current makeup trends — think: untraditional takes on winged liner, gold chains as eyeliner and stick-on jewels. So it’s no surprise that products with her name attached have followed.

In February, Davy launched face decals with Face Lace by Phyllis Cohen. The decals are metallic clouds inspired by a look she’d created for Jules (Schafer) in “Euphoria.” They sold out in five days on shop.donnidavy.com. Now, Davy and Cohen have released two more sets of decals: Eye-lectric, featuring lightning bolt-inspired designs, and Spiked, reminiscent of extremely dramatic lashes. Kate Hudson wore decals from the Eye-lectric set in the March issue of InStyle.

“The clouds [are for] a specific crowd,” Davy said of the first drop, a limited release intended to “test the waters.”

“They’re playful. They’re pretty. They’re whimsical. They’re not necessarily meant to do anything super flattering — they’re just fun,” she said. “The spikes are actually more flattering and wearable. So I was like, ‘Let’s see what happens with something less whimsical and almost the opposite — more badass and almost more glam.” The wing shape, Davy said of the spikes, provides an eye-lifting effect.

And, as if that weren’t enough, the internet is abuzz with rumors of a full A24 (the production company behind “Euphoria”) makeup brand, with which Davy would undoubtedly be involved. The production company declined to comment. Gossip started when a job posting for a director of operations and supply went up on A24’s website. It reads: “Rules Beauty is a new A24 portfolio company focusing on the beauty space.” Speculation has since abounded that Rules is an amalgamation of Rue and Jules, “Euphoria’s” main characters. Given Davy’s distinctive styles for the show and her existing collaborations with Face Lace, one can almost start to picture what this brand could look like.

Davy told Glossy that she wants to keep creating products. “It’s been really fun,” she said. “I have a lot of ideas for stuff and not just stickers.” As a makeup artist on the show, she often has to “jerry-rig different things together, different products to get the exact finish or color I’m looking for.” she said. “It’s really cool to see things come to life … and then to see other people enjoying them is the best thing.”

For now, Davy is expanding her presence on TikTok, where, she said, the audience is different from that on Instagram. “Once I dipped my toes into TikTok, there was a whole new audience of kids that were like, ‘What? You’re here? Oh, you’re the person… People know “Euphoria” makeup, [but] they don’t know me. It’s been really cool having people reach out,” she said.

In a way, TikTok is the perfect platform for Davy’s designs. It is, after all, known for being the less buttoned-up, less “perfect” social network — a vibe that certainly aligns with the real and messy characters on “Euphoria.” Gen Z is also known for being more willing to experiment or be seen as “quirky.”

“I was looking at what Gen Z is doing [with makeup]. But I also looked a lot at all of the decades. People in history and in society have been doing cool makeup or different makeup, or self-expressive makeup on themselves forever. It just happens to exist a bit more on the periphery, on the outskirts of society — or, like, the weird girl at school,” Davy said.

Bringing these looks to the large audience of an HBO show may have given a sort of permission to others who wanted to experiment, she said. Comparatively, while runway makeup is often experimental, it can feel out of reach. “These characters [on “Euphoria,”] “they fuck up, they make mistakes, they fall in love, they cry. They’re funny. They’re real. So it’s kind of inviting and refreshing to see cool makeup on TV,” she said.