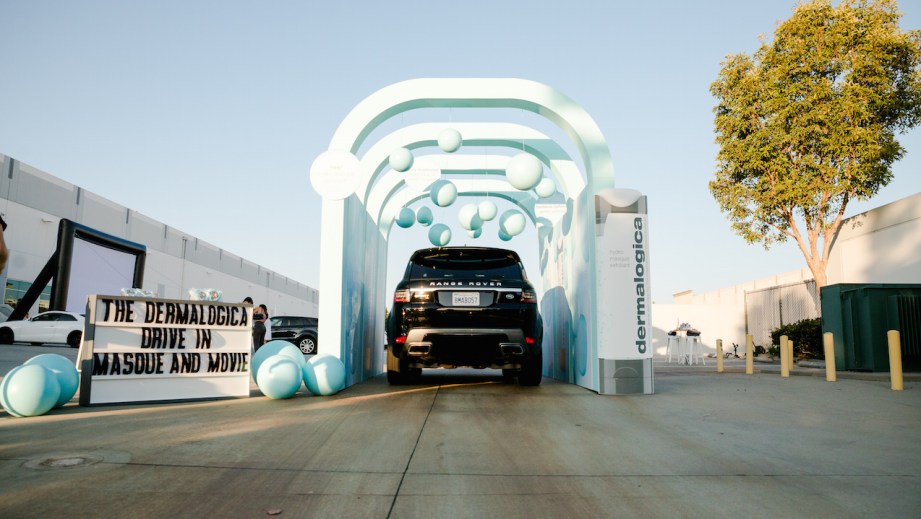 Inside Dermalogica’s playbook for bringing back in-person events

On Tuesday, Dermalogica hosted its first in-person influencer event, laying the groundwork for a return to pre-pandemic influencer activations. The event was held in Los Angeles in an outdoor space designed to look like a drive-in movie theatre, and was exclusive to an undisclosed mix 16 paid and unpaid influencers and their guests, for a total of 28 people. It was meant to kick-off the launch of the brand’s new Hydro Masque Exfoliant.

As the status of the coronavirus infections and deaths slowly improves in cities like New York City and Los Angeles, people in these areas are beginning to venture out of their homes and resume restaurant dining and even travel. But for brands that are used to heavily focusing on event marketing, there is now concern around safety due to the liability of bringing people together — not to mention the negative publicity — should an attendee become infected. But, with virtual events becoming more crowded and Zoom fatigue arising, brands are trying to pinpoint plausible IRL options.

“People are craving human connection more than ever before, and are starting to be more comfortable with stepping out,” said Lauren Consiglio, Dermalogica vp of U.S. marketing and global programs. “But most importantly, we felt we could do it safely at this point in time.”

Dermalogica’s safety plan for the event included mandatory Covid-19 testing for guests, Dermalogica employees, vendors and their staff. There were also separate product stations set up next to each parking space where attendees were parked. A masterclass presentation to demonstrate the products was held at safe distance, which required Dermalogica to hire A/V equipment. Consiglio declined to state costs for the event, but said Dermalogica also had to build out the entire event space, including hiring food trucks, and bringing in portable toilets, a set trailer and the movie screen.

“In a pre-Covid-19 world, we would have just rented a spot that was already ready to go, for the most part,” she said. “It was challenging because how [we did this] was so different from a regular event.”

And rather than a standard event where people can move around to different stations, the Dermalogica team had to think about bringing experiences to attendees to ensure social distancing. Along with facilitating the individual product tables and distanced masterclass presentation, that included delivering food to people’s vehicles.

Traditionally, Dermalogica hosts at least four influencer events a year. It had pivoted its focus to e-commerce, like all beauty brands, in March by investing in virtual consultations (launched the same month), a live chat offering and an AI-based skin analysis tool. Though Consiglio declined to share sales figures, she said e-commerce traffic since March has increased by 34% and that live chats have increased by 200% — it is not a new feature. Also since March, its Instagram engagement rates nearly doubled for educational content like masterclasses to  4.3%, on average, and its Instagram following has increased 20% to 469,000 followers.

So far, the influencers’ feedback has been generally positive, said Allee Goldberg, Dermalogica influencer marketing manager. She said that the majority of unpaid influencers who attended shared Dermalogica’s safety protocols for the event in their social postings, even though Dermalogica did not ask them to.

“This was one of [the influencers’] first forays into what new events look like,” said Goldberg. “I am inspired to see what else can happen from a safety perspective, as in-person opportunities re-grow within our industry and within Dermalogica.”