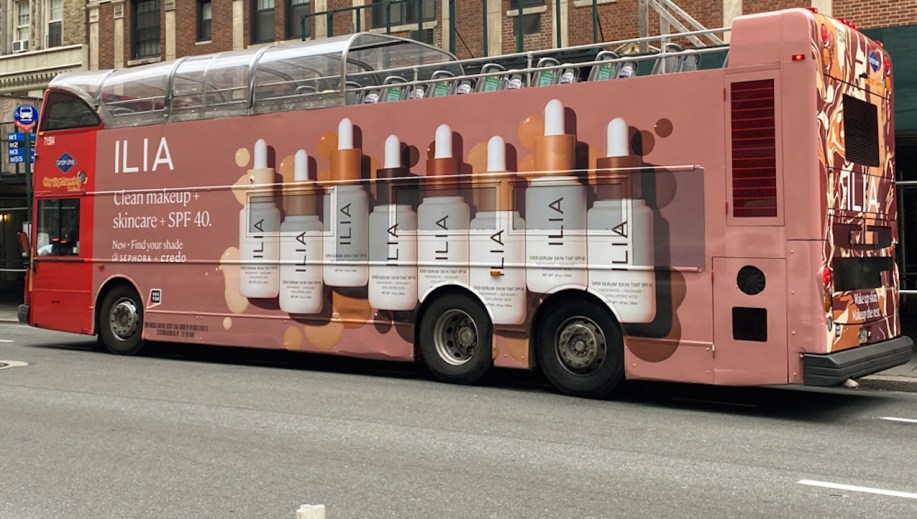 Hot off the heels of announcing its Series B funding in January, clean makeup brand Ilia is funneling that capital into its first outdoor ad campaign.

The 10-year-old brand began its campaign on Feb. 17 to coincide with the launch of its latest complexion product, a serum skin tint. The product is featured on a Manhattan tour bus until April, and between March 15 to April 15, there will be four billboards across Los Angeles as well as wild postings in New York City. These flyers will be placed near Credo and Sephora stores where Ilia is sold. Ilia has not previously invested in advertising, but will continue outdoor efforts throughout the year, said Sasha Plavsic, founder and creative director.

Instead of ramping up its digital marketing tactics with its new capital, Ilia is concentrating on building brand awareness nationally. The brand’s sales have doubled every year since 2017, said Lynda Berkowitz, Ilia CEO, but declined to state 2019 sales or the investment in this campaign. WWD reported Ilia ended 2019 with $22 million in sales. The brand declined to state what percentage of sales are wholesale versus DTC.

“Clean beauty is one of the fastest-growing categories in beauty, and I believe it’s not just about saying you are clean,” said Plavsic. “What do you say as a brand that will draw someone in? You don’t have to call out exactly what the product is, because customers are there to buy into an overall narrative and brand story.”

In 2019, brands like Sakara Life, Better Skin Co., Beautycounter and Ipsy all dabbled in offline advertising as digital customer acquisition costs have increased. Clean beauty and indie wellness brands have had to become more comfortable with delivering a broader message, even if access to these products is still limited. Ilia crafted a new tagline for its campaign, “Wake up skin, makeup the rest” to highlight the skin-care benefits of its tinted serum. And although there is no call to action for the campaign, such as a discount code, Sephora and Credo are planned to bridge the omnichannel messaging together and wild postings will be near stores.

“[When it comes to offline advertising,] customers want to discover new brands, and that isn’t done in magazines anymore,” said Berkowitz. “[They find out about them] when they’re walking around.”

Both Berkowitz and Plavsic said that as a brand awareness campaign, it is harder to track success compared to a digital campaign. As such, key performance indicators will rely on social media follower growth (Ilia currently has 196,000 Instagram followers), earned media value and affiliate link sales through editorial partners. The brand declined to state whether it was investing further in digital advertising, only stating that it was testing what works before making further decisions.

“There is a narrative from being able to see a brand as an ad in your phone, then on Instagram, then outside on a billboard and finally in Sephora,” said Plavsic. “It creates a 3D effect.”