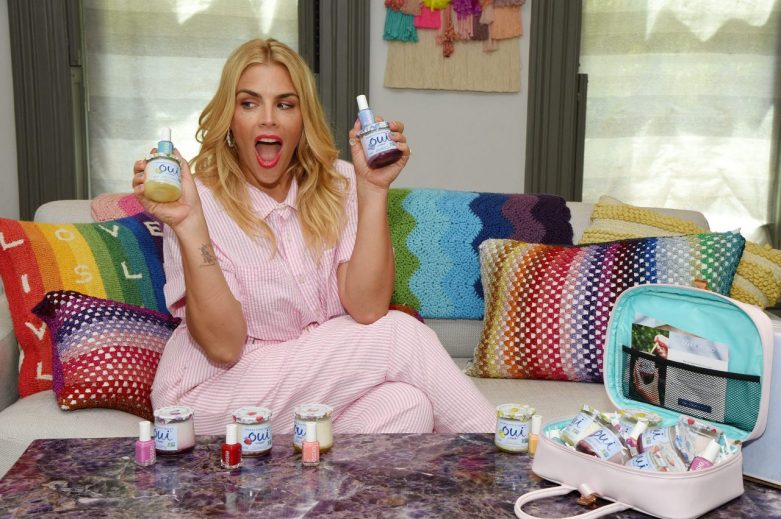 While 2020 and 2021 haven’t been normal for anyone, they’ve been particularly “busy” for Busy Philipps. For example, she starred in “Girls 5eva,” a hit show on NBC’s streaming platform, Peacock, and made a move from L.A. to N.Y. As with everything she does, her 2.1 million Instagram followers have been along for the ride. Some might be longtime fans of Philipps’ work, from her iconic role as Kim Kelly on “Freaks and Geeks,” the cult classic show debuted in 1999, while others may have discovered her via her podcast, “Busy Philipps Is Doing Her Best.” On it, she hosts guests ranging from Katie Sturino to Senator Elizabeth Warren. She launched the podcast in August 2020, a year after the cancellation of her late-night talk show, “Busy Tonight.”

More recently, she collaborated with Essie and Oui by Yoplait — food and beauty collaborations are everywhere  — on their joint effort for International Self-Care Day, on July 24. Glossy spoke with Philipps about how she approaches wellness, how she’s maintained self-care in the last year, despite its challenges, and what she’s learned from her Gen-Z children.

I’ve heard you talk about being very experimental with wellness and trying “woo-woo” treatments. Do you have a favorite?
“Energy healing, like Reiki. I really love it. I fully feel like it works. I’ve had certain weird body things that I didn’t really understand what they were. The energy healing of Reiki moves through some stuff in your body. It eliminates it and releases it. I’ve been going to a woman here in New York that I’m obsessed with.”

Do you feel like you’ve learned anything about beauty and self-care from Gen Z and being around them? (Philipps has two children: Birdie, 12, and Cricket, 8.)
“They have a real freedom to their personhood that other generations — especially mine — were not afforded. They have a great deal of information at their fingertips that my generation [did not], but a lot of millennials didn’t, either, until they were a bit older. That information and knowledge can be very, very powerful. And then, of course, misinformation can also be very, very powerful. The kids I know tend to be very discerning about what’s real and what’s not, and seem to have a good handle on that.

[I’ve said,] ‘They don’t care if they stink,’ because I find that a lot of kids have bigger fish to fry. Their brains are already inundated and overloaded with really intense, deep, philosophical life issues and questions… I don’t know one Gen-Z kid whose parents wouldn’t describe them as having anxiety. So maybe the ones that are focused on the superficial are oblivious.”

You moved across the country during the pandemic. Has your self-care routine changed?
“A lot has changed in the last year. I love painting my nails [now]. I find it very soothing. I love a manicure, and I like changing up the colors. I really go for it with the manicures. With my toes, I’m like, ‘Bless you, but you’re gonna stay the same for the next four weeks.’ And so I try to pick [a color that’s] classic, like a red. I go darker in the winter and more peachy-pinky in the summer.

As we go back into some new version of…life, I think it’s important that we try to remember some of the ways we allowed ourselves to slow down and [the fact that] that was actually valuable.”

Do L.A. and New York locals approach wellness in different ways?
“It’s hard to say, because I moved to New York in the middle of a global pandemic. Wellness and the emphasis on healthy eating is much more prevalent on the West Coast, and it sort of trickles down into many different industries in Los Angeles. There’s lots of focus on health and wellness. I think it has to do with the produce available; the fruits and vegetables don’t taste as good [in NYC], because they’re not fresh. So it’s kind of like, ‘Why would I be eating that? I’ll just have this vodka pizza.’ But I’m like, ‘Where’s my salad restaurant? You go to the place around the corner, and it’s a sandwich shop. A sandwich is not the same thing.”