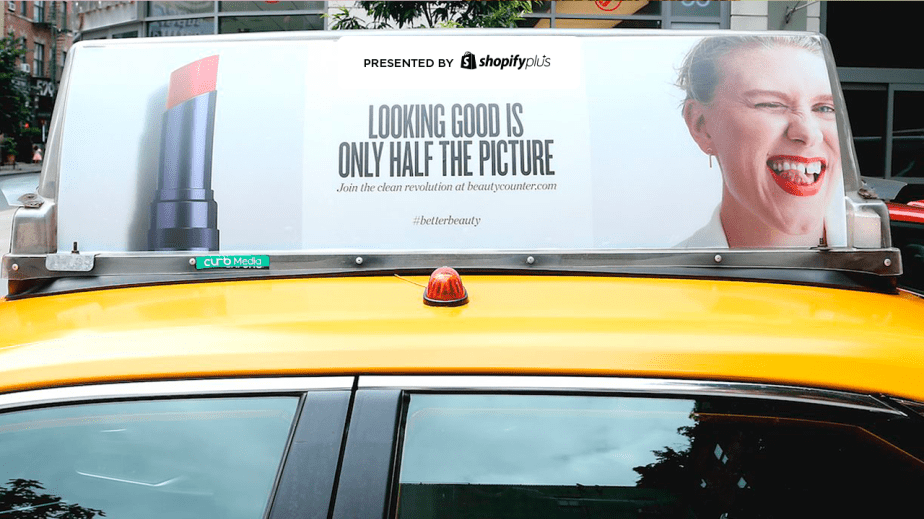 In its largest marketing campaign to date, Beautycounter is evolving its communication strategies to show its customers that it represents more than product.

Beginning Aug. 14, the clean beauty brand debuted a multi-prong campaign called “Looking Good Is Only Half The Picture” on its e-commerce site, social media channels and via an out-of-door campaign in New York City and Los Angeles. (The featured buses, taxis, billboards and wild street postings direct to a landing page echoing similar messaging.) Beautycounter also took a full-page ad in The New York Times, its first print campaign, on Sunday, and will hand out the red lipstick seen in the ad for free to attendees of New York Fashion Week.

In 2018, the company’s revenue grew 33%, and it made over $325 million in sales. It increased its ad and media spend by 25% in 2019, said Margot Brunelle Fooshee, Beautycounter CMO. She declined to state the cost of the new campaign, but it is likely more than $500,000, according to Danny Pouladian, spokesperson for city advertising firm Blue Line Media and The New York Times media kit.

“The whole idea of ‘Looking Good Is Only Half The Picture’ is that there’s more to beauty, both for customers and as a brand. Because we think our story goes deeper than clean products, we want our campaign to be a movement. We want people to have a moment of, ‘Huh, what’s that?’ and drive them to our website,” said Fooshee.

Beautycounter began focusing on 360-degree campaigns in September 2018, but the company has incorporated social advocacy since its founding in 2013. In the past, it has received scrutiny for its marketing tactics, but it has tried to amplify its efforts around sustainability, ingredient legislation and inclusivity as of late. In 2016, Beautycounter launched an ongoing initiative called “Text-to-action,” where shoppers could text a number to automatically populate and send an email advocating for new ingredient legislation to their respective senators. Earlier this year, the company began updating its packaging to glass and opted to not include plastic applicators in its products.

These efforts are to maintain its positioning in the market as a “category leader” in both activism and clean beauty, said Fooshee. Especially when larger conglomerates like L’Occitane and LVMH-owned Guerlain have been stepping up their promotion of their own sustainability efforts. It’s all part of keeping in-step with changing consumer values.

“It’s not just about being a leader in clean beauty but leading in a more socially minded way,” said Renfrew. “In today’s day and age, you need to go above and beyond. We have a commitment to our community, our environment, our health and work toward that every day.”