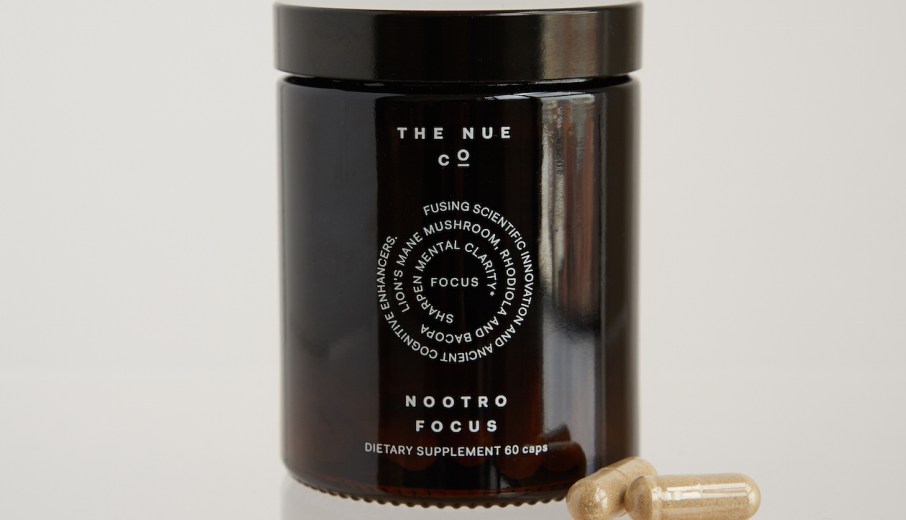 As the wellness proposition continues to expand, a number of brands like Goop, meal-delivery and wellness company Sakara Life and beauty-supplement line The Nue Co. are starting to bet on nootropics, often referred to as smart drugs.

Consisting of ingredients like caffeine, L-theanine (found in green tea) and lion’s mane mushroom, nootropics grew out of tech and biohacking communities, where people were trying to stay alert and focused during long workdays. The same ingredients are now hitting the wellness space: In February, Goop launched its nootropic ingestible Nerd Alert, and Sakara Life debuted Nootropic Chocolates. In March, The Nue Co. released its Nootro-Focus supplement, and it will roll it out to Violet Grey, Net-a-Porter and Mr. Porter this month.

“If wellness started as losing weight and looking better, we are now focused on feeling better and are headed to a place where we are asking for more to keep up with 14-hour days,” said Jules Miller, founder and CEO of The Nue Co.

The connection between beauty and brain-boosting products is nebulous, but wellness as a whole has been marketed as a panacea for issues such as stress and anxiety, as well as addressing inner-outer beauty through ingestible and topical products. Overall, the nootropics market is expected to reach $6 billion by 2024, at an annual growth rate of almost 18%, according to a 2016 report from Credence Research.

Most of The Nue Co.’s customers are not familiar with nootropics, said Miller. But nearly 96% are in the U.S., and of those, 40% are base in New York and “corporate-junkies” with demanding jobs.

“The relationship our consumer has with ingestibles, skin care and makeup is holistic. Being able to navigate physical health, mental health and beauty is the same thing for our customers,” she said.

Still, education is a requirement for the nascent wellness category. Since March 14, The Nue Co. has published five times on its blog about Nootro-Focus, including a 30-second video to conceptualize the feeling of the product. The video features a man sitting, while people around him are chatting and checking their phones before ultimately leaving the man alone in a sense of blissful peace.

“Communication channels are so saturated, we wanted to do more than a long blog post on how it feels,” said Miller. Flo Glendenning, avp of business development for The Nue Co. added, “We wanted to communicate that you won’t feel wired or full of energy.”

These posts and the video have also been posted to the brand’s social media channels, where it has almost 30,000 followers on Instagram and 3,500 likes on Facebook. The Violet Files, the content arm of Violet Grey, also had a blog post on April 2 for Nootro-Focus. Within three days of the product’s launch, Violet Grey sold out of 60% of its inventory, according to the retailer. It’s now in the top-three best-selling products for the month of April.

Goop has also found sales success with its product Nerd Alert, in which the common ingredients of caffeine and L-theanine are packaged together. Gerda Endemann, senior director of science and research for Goop, said Nerd Alert, which retails for $30 for 30 pieces, now represents 20% of sales of Goop-branded products in retail locations. The brand has promoted its Nerd Alert twice since launch through Instagram, where it has 1 million followers, through GIFs. It has also featured it in three blog posts and a 30-second film on its e-commerce site, where a woman takes Nerd Alert and then begins dancing in a café.

“We realized that the people who could benefit from nootropics extend far beyond those programming or gaming ,” Endemann said. “We’re making nootropics accessible in a convenient, soft-chew form to a wider audience and relating their benefits to both customers’ and our own needs. It’s reinforced our belief that wellness and the desire to look, feel, and perform at our best is one possessed by many, regardless of industry.”