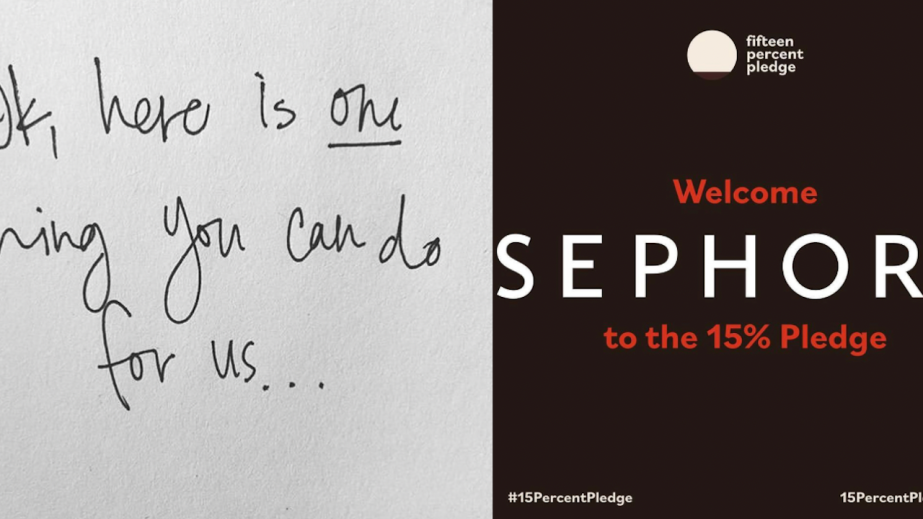 1 year in: Sephora, Ulta Beauty and Madewell on taking the 15 Percent Pledge

Aurora James was at home in Brooklyn last summer, following the widespread Black Lives Matter protests filling streets nationwide. Simultaneously, she was trying to keep her shoe brand, Brother Vellies, afloat during a time that everyone was working from home, shoeless. “I started to think about what actions we could take,” she said.

Friends were calling, asking for advice on how to handle the situation, either “from a PR perspective, or [in regard to] what their employer was doing — and none of it really seemed like enough,” James said. On a call with a friend, she wondered what the impact might be if big retailers committed to allocating 15% of their shelf space to Black-owned brands. “All these Black-owned businesses would have purchase orders from major retailers, which would help them get loans they’re normally not approved for. Venture capital would start paying attention to them.”

On Saturday, May 29, she wrote a call to action and posted it on Instagram. Things moved quickly from there. “Sunday night, I stayed up overnight with my web designer, and we launched the petition and website on Monday at noon. By Wednesday, we became a nonprofit, and by day 10, Sephora became the first major company to commit to the 15 Percent Pledge.” Since then, 27 retailers have taken the pledge.

Taking the pledge, however, is more complicated than a retailer simply posting an Instagram. It is, in fact, a formal contract. “A lot of people don’t realize that the retailers are signing on to multi-year contracts. Every quarter, they’re sitting down with us, and they’re sharing their results and their progress, and their pain points.” Both retailers and James told Glossy that implementing the pledge is a collaborative process. All of this is why James and her team make sure the retailers who take the pledge are “100% on board to really knock it out of the park.” As a result, they’ve focused on the biggest companies in America, and haven’t yet trickled down to some of the smaller ones. James’ organization has recently partnered with McKinsey, which has supported its collection of data.

At the outset, James said, she had no idea what the average allocation of shelf space was. “I knew it was nowhere near 15%, because I would look at some of these fashion retailers and be like, ‘OK, so they carry me [Brother Vellies] and they carry Kerby [Jean-Raymond of Pyer Moss].’” When the Pledge started out, James and her team did external audits of many major retailers, and the “highest representation we ever saw was 3%.”

Flash forward a year, and James said the beauty industry is “at the forefront of taking the pledge.”

According to Artemis Patrick, global chief merchandising officer at Sephora, [the pledge] “immediately clicked for us.”

The Sephora Accelerate program was altered to include solely BIPOC-founded brands in 2021. The goal is that all will launch at Sephora. Topicals, a skin-care brand focused on addressing “taboo” concerns like eczema and hyperpigmentation, was the first from the program to launch at Sephora. It did so with great success, selling out in 48 hours. Other brands that participated in the program included Eadem, 54 Thrones, Ries, Hyper Skin, Glory, Kulfi Beauty and Imania Beauty. Participants in the Accelerate program received mentorship from James herself, as well as Black entrepreneurs like Briogeo founder Nancy Twine.

Patrick said Sephora “started the journey with eight [Black-owned] brands and currently offers 14.” Newcomers include LYS Beauty, Danessa Myricks, RoseE Ingleton MD and Sunday II Sunday. The retailer will “more than double its assortment [of Black-owned brands] by the end of the year,” Patrick said. It will likely hit 15% within the hair category by the end of the year.

Ulta Beauty formally took the pledge on June 1, though, according to chief merchandising officer Monica Arnaudo, it made a commitment to double the number of Black-owned brands in its assortment in February. At the start of 2021, that number was 13, and it’s since risen to 20. Since then, Home Body, Camille Rose, Black Girl Sunscreen, Black Opal and Mented have been added to the store’s assortment.

The retailer has also made significant financial commitments to further its efforts in the realm of diversity and inclusion. “From a marketing standpoint, we’ve dedicated $4 million in funds to support the Black-owned brands within our assortment,” said Arnaudo. An additional $20 million has been allocated to connect with diverse audiences, with ads placed on multicultural media platforms including B.E.T., Univision and Telemundo. Yet another $2 million was committed to “additional training, on top of the mandatory training to reinforce inclusivity and address unconscious biases.” In February, Tracee Ellis Ross, actor and founder of Ulta Beauty-exclusive brand Pattern, became a diversity and inclusion adviser for the retailer.

In November, Bluemercury, which is owned by Macy’s Inc., also took the pledge. Brands it’s added include KNC, Beautystat, Biophile and Beneath Your Mask.

Credo Beauty has taken the pledge and plans to complete it, but it is not an official partner of James’ organization. “We believe it’s the right thing to do, to diversify our assortment more and make sure that we are really offering products that speak to all of our customers. However, the 15 Percent Pledge is only working with large corporations,” said Michelle Connelly, vp of merchandising and planning. Credo’s goal, she said, is to “give every brand its own moment and work closely with them to develop a marketing plan that is right for them.” Credo has a mentorship program designed to support minority-owned brands called Credo for Change. Common Heir, which makes biodegradable vitamin C serum ampoules, was the first brand to complete the program and launch in the store. Other new-to-Credo Black-owned brands include Muri Lelu and Pholk Beauty.

On the fashion end of the spectrum, Madewell took the pledge in December 2020. “We committed to having at least 15% of the brands we sell through Hometown Heroes, Labels We Love and ongoing collaborations be with Black-owned businesses, makers and designers by the end of 2021,” said Anne Crisafulli, svp of merchandising. The clothing retailer, under the J.Crew umbrella, has made strides. “Since taking the Pledge, we have increased our representation of Black-owned businesses at Madewell by 200%. And we have found opportunities to offer as much exposure to these brands where we can.” Though Madewell is known for its apparel, Black-owned brands added to its assortment include ingestible wellness brand Golde, candles by Peacesake Candles & Co and sunscreen from Unsun Cosmetics. As far as merchandising goes, the retailer has actively listened to its community. “We keep our channels of communication open with our customers and have accepted suggestions from them on small Black-owned businesses that should be incorporated into our programming,” Crisafulli said.

For James’ part, she is most interested in growth that is “healthy and sustainable.” When she put out the initial call, she received responses along the lines of, “We just sent out 100 purchase orders to Black-owned businesses.” To that, she said: “You are not ready, because you do not understand the proposition. This is not a crash diet.”