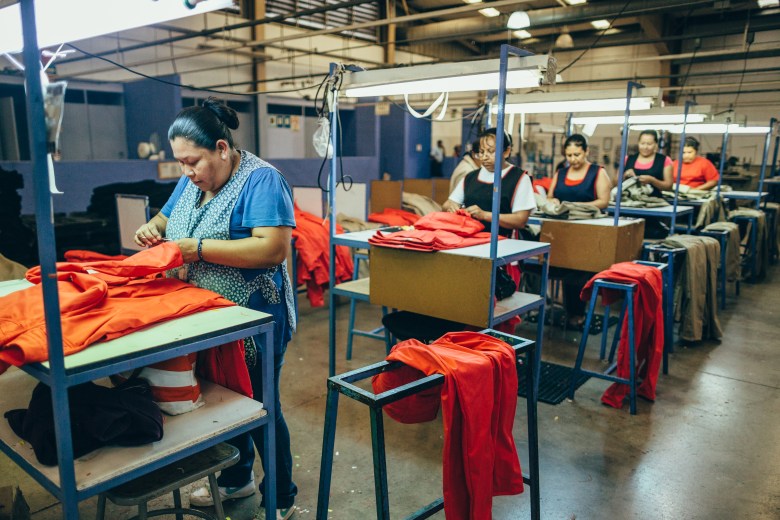 For brands that aren’t embracing the measure of ethical and sustainable fashion, there’s a price to pay that goes far beyond P&L — a human cost.

Behind the numbers and production costs are garment workers, predominantly female, who face daily abuse and different types of violence in the workplace, including: sexual harassment, psychological abuse, job and salary inequality and discrimination by male supervisors who abuse their hierarchical, macho power against female workers within the supply chain. This is the result of a political and social patriarchal structure which perpetuates unequal rights and gender discrimination, aided by the lack of knowledge among the female garment workers of their rights.

Blanca Velázquez emphasizes the importance of knowing your rights more than anyone. As the founder and director of the Centro de Apoyo al Trabajador (CAT), Velázquez helps primarily female workers in Morelos — a state just southeast of Mexico City — know and defend their human rights.

But it’s a long, complicated and dangerous process to get workers involved, to fight against powerful factory owners and open brands’ eyes to the injustices occurring within their supply chains as it touches upon both political and economic interests. The activists involved in such processes of advocacy are in constant danger while being subjected to the interests of economic power struggles. According to them, brands don’t put the issues high on their agendas as they are too far removed from the workers to emphatize.

For Velázquez, women’s rights and worker rights are inextricably entwined. “In Morales, we trained up to 200 women to advocate for change and to demand improvements in their working conditions for up to 3 years. We were supported by local, national and international partners who were vocal in getting the brands involved to stop the injustices experienced by female workers. This made all the difference.”

Women in particular have been unfairly discriminated against by maquiladoras — Mexican manufacturing plants. They have found themselves the target of invasive urine testing and sanitary napkin inspections to ensure that they aren’t pregnant. But through tactics such as collective bargaining, Velázquez and CAT’s work in promoting human rights has been fundamental in achieving significant change for garment workers.

“In once instance, the women collectively sued the company, RINTEX — and the factory wasn’t very pleased,” says Velázquez. “There was evidence of sexual harassment — five cases, very well-documented — enough evidence was gathered to prove that this was a systemic problem within the factory. They were working 14 hours a day, with most of those extra hours unpaid, in factories with very low ventilation and temperatures reaching 38 degrees celsius. Moreover, they often didn’t have enough water to drink and lacked specific gear to protect themselves from work accidents.”

Armed with this knowledge, the workers established contact with three international brands — clients of the factory. Of those three international, well-known brands, Velázquez explains, only one actually responded accordingly. But despite this setback, the brand worked with CAT and the workers to create a remediation plan to improve the working conditions at the factory — showing how even participation from just one brand can make a huge impact.

“The men that had been identified as the harassers were fired,” says Velázquez. “They created a policy of zero tolerance on sexual harassment. The company agreed and established 450 contracts, formal contracts, permanent contracts, recognizing the length of the working period of many of the workers. They allowed the women to keep their independent union, and they recognized, finally, the pay of extra hours.”

But as great as these achievements were, this sense of accomplishment was unfortunately short-lived. In May of 2018 after two years of negotiations, the factory fired 300 of the female workers — all between the ages of 19 and 50 — who had originally started the initial collective bargaining process.

Despite this devastating turn of events, the aftermath proved that the organization’s efforts hadn’t been for nothing. “The one international brand that had responded with the remediation plan decided to finally leave this supplier in October 2019,” says Velázquez. “So the relationship between the factory and the brand was completely broken and finished.”

If more brands want to take action against the predatory practices that factories impose, it’s clear that they’ll have to hit them where it hurts: their wallets. Velázquez points out that several companies already require regular factory visits to ensure that things are up to par — but those audits oftentimes aren’t focused on the right kind of quality control. In fact, labor inspectors almost never visit the factories, while audits carried out by brands are often rescheduled. This gives managers the appropriate amount of time to sweet talk workers out of raising complaints.

“Those audits need to be focused more on the working conditions and labor rights of the people producing these garments, rather than only focusing on the finished product and its quality,” she explains.

According to Velázquez, the best thing that brands can do is to take their remediation plan seriously and not run away when workers are in conflict with the company, instead of trying to evade responsibility. Brands have an apolitical responsibility to compensate workers or to shield them from foreclosure. “Another thing for brands to do is to invest in grassroots organizations. They have first-hand information and stories and they’re kind of in, what we say in Spanish, the frontline of the battle.”

And brands that allow transparency into their supply chains push forward a message of accountability. Velázquez notes the prevalence of brands that refuse to closely examine their supply chains, citing their lack of interest as a growing danger. “They don’t want to know. They don’t want to see. And when they know and when they see, they run away,” she states. “The normal reaction is to leave — and that’s the worst thing they can do.”

Instead, she encourages those brands to stay and take co-responsibility of the problems they uncover, working with suppliers, factories and workers alike to form remediation plans end these malevolent practices for good.