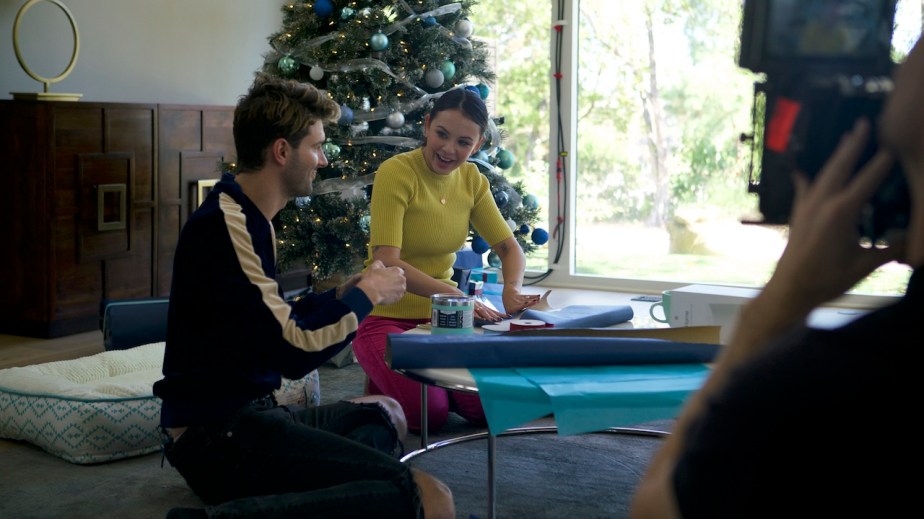 Yahoo Lifestyle is rolling out the next step of its “NowWith” program, a recurring series of shoppable short videos featuring different celebrity influencers along with brand and retailer partners. Building on the previously announced series starring Nicole Richie and affiliated with the lifestyle brand Wylde Honey, Yahoo Lifestyle has now announced another series that will run throughout the holiday season featuring actress Janel Parrish, a major influencer in her own right with more than 6 million followers on Instagram, and retail partner eBay.

Each video, which will be hosted on Yahoo Lifestyle’s website along with its social media channels, will star Parrish guiding customers through a selection of products in the fashion, beauty, wellness and home decor sectors. Throughout, the video series will be shoppable with clickable content within the videos that leads to products available through eBay.

The first episode of Parrish’s series, which is called Deals NowWith, will debut alongside Richie’s Style NowWith, on Nov. 15. While these two series are the only ones currently announced, Yahoo Lifestyle plans for future series to be produced in partnership with mainly retailers and some brands from across a variety of categories. Each new series will also be associated with a celebrity influencer, with “lifestyle inspiration from beloved pop-culture figures,” according to Yahoo Lifestyle.

Oath, the media unit of Verizon, made up of Yahoo, AOL and Huffington Post, has been in a rough spot recently. While earnings were looking up a year ago, Verizon’s most recent results showed that revenue from Oath had fallen by 7 percent from a year ago, and the company did not expect Oath to hit $10 billion in revenue as it had previously predicted.

As Yahoo struggles to compete for attention under its new leadership at Verizon, the collaboration with influencers who have their own large, built-in audience is meant to help boost traffic. At the same time, eBay is hoping that strong shoppable content tied to the holidays will help drive Yahoo’s significant audience (a billion users still, as of late 2016) to eBay over competitors.

With the two series yet to be released, it is unclear how much of an effect this move will have. Fashion and beauty have leaned heavily on celebrity endorsements in the past, but there are doubts as to how successful such partnerships are in actually swaying customers.

Earlier this year, a study from the beauty app company Perfect365 surveyed 1,200 women around the world to find out what was driving most of their beauty purchases. Celebrities came in last. Rather than relying on slick, overproduced content, consumers seem to gravitate toward the more authentic everyday influencer content that proliferates on social media platforms like Instagram. Revolve recently noted that nearly 70 percent of its sales came from these types of influencer pushes.

Suzy Deering, eBay’s CMO, said the company has had success with influencers ranging from the super-famous, celebrity-level influencers to more everyday micro-influencers.

“EBay has a deep history of working with influencers — from our celebrity partners for eBay for Charity [eBay’s platform for donating to non-profit organizations] to the notable talent we work with to create exclusive inventory. Plus, we teamed up with influential stylists and tastemakers across categories to launch notable programs like our Community Sneaker Drop [a curated collection of sneakers launched with Stadium Goods] earlier this year and our first-ever Stylist Sale [a similar collection curated by top stylists like Karla Welch],” she said.

Some brands within the fashion industry have had success with campaigns that jump between celebrity influencers with micro-influencers. For Dior’s Love Chain campaign last year, the brand ran a campaign that included celebrities like Natalie Portman and Rihanna with smaller influencers like Shini Park.

For younger consumers in particular, these micro-influencers tend to be more effective because they are perceived as being more authentic.

“Whether you’re a millennial, Gen Z or Gen X, you have an expectation that content will be authentic, and we tend to get more of that from micro-influencers,” Natasha Fishman, evp of marketing at ABG, told Glossy in April.